On June 17th, 2015, Dylann Roof killed nine African American churchgoers at an Episcopal Church in Charleston, South Carolina. Afterwards, he told investigators that he intended to start a race war throughout the United States. Following the shooting, FBI Director James Comey stated that the shooting in Charleston was not terrorism, asserting that “Terrorism is [an] act of violence…to try to influence a public body or citizenry, so it’s more of a political act. And again based on what I know so far I don’t see it as a political act.” His assessment was condemned from across the political spectrum, from critics on both the left (including then Democratic presidential candidate Hillary Clinton, and former Attorney General Eric Holder), and right (including then GOP presidential candidate Rick Santorum). Similar public debates have erupted followed other violent incidents, including the bombing at the Boston Marathon and shooting in Orlando, Florida. These debates not only highlight the contentiousness of classifying terrorism, but also the stakes involved in doing so, for policymakers, academics, and members of the public alike.

In our new research we used experimental methods to explain the tenor of these public debates. We investigate terrorism in a public opinion context not because we believe that the intuition of the mass public can necessarily resolve debates about what should or should not be considered terrorism, but rather because of the central role that public opinion plays in our understanding of how terrorism works. In a vast array of prior research, terrorism is understood as a form of violence that functions by attracting public attention. It is because terrorism hinges on public reaction that Margaret Thatcher suggested terrorists depend on “the oxygen of publicity,” that Carlo Pisacane declared terrorism to be “propaganda by deed,” and that Ayman al-Zawahiri suggested that for al-Qaeda, media coverage is “more than half” the battle.  If the responses of ordinary citizens thus constitute a central means through which terrorism operates, it logically follows that understanding what ordinary citizens think terrorism is is a crucial prerequisite to understanding how they react to it.

Our approach is simple. In a survey of 1,400 adult Americans, we showed each respondent summaries of a series of incidents, with randomly generated attributes: the type of tactics used (for example, a shooting versus bombing); if there were casualties; what the target was; where the attack took place; who the perpetrator was (including whether or not they were identified as Muslim); what their motivation was (for example, a personal dispute, policy change, hatred), and so on. We then asked participants to tell us whether they thought of each incident as being an act of terrorism or not. For more on the methodology, see here.

“Honk for peace” by Amanda Hirsch is licensed under CC BY 2.0

The results of our survey show how ordinary citizens classify terrorism based not only on relatively objective facts on the ground, but also on fairly subjective considerations about the perpetrator. On the one hand, considerations about the type and severity of violence matter—though interestingly, not the distinction between civilian and military targets that plays a central role in contemporary legal definitions. Figure 1 below shows the importance of the severity and type of violence, demonstrating that while high casualty incidents are more likely to be considered terrorism, the effect size is small when compared to the increase associated with more extreme tactics. For example, a bombing with no casualties is nonetheless more likely to be considered to be terrorism than a hostage-taking or shooting that kills two people. 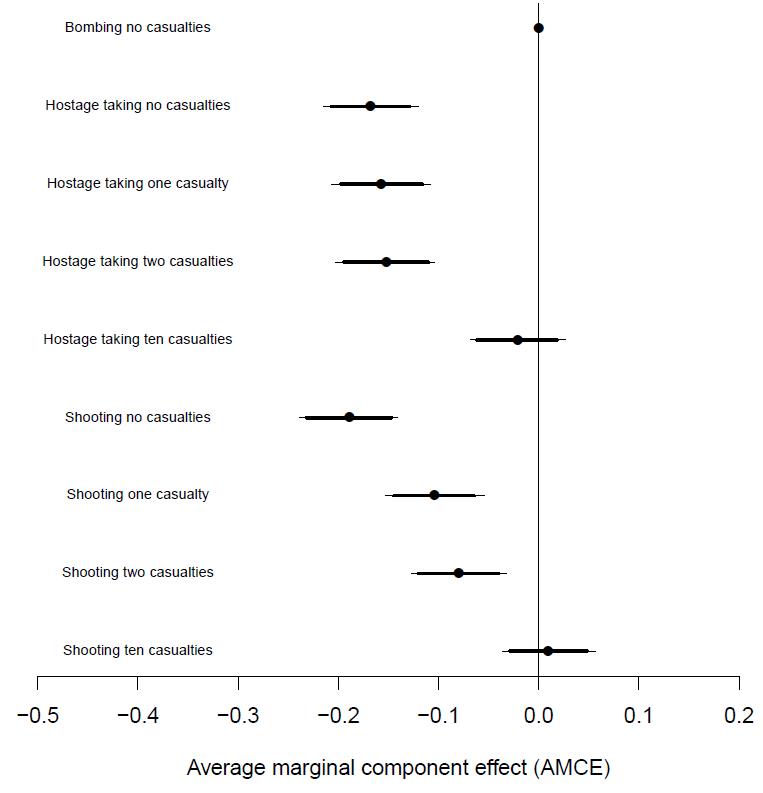 On the other hand, our respondents are also heavily influenced by relatively subjective descriptions about the perpetrator’s identity and motivations, considerations about which the media has considerable latitude in the language it uses to cover incidents. Figure 2 shows the importance of the motivation for the incident, demonstrating how the perceived purposiveness of the actor affects the likelihood incidents are classified as terrorism. We can see that violent actions motivated by policy goals and government overthrow are the most likely to be classified as terrorism, while those motivated by a personal dispute are the least.

Nonetheless, the strong effect of policy-oriented goals here reinforces the extent to which our respondents associate terrorism with acting purposively for a broader political agenda. These results suggest media coverage profoundly shapes how the public comes to understand violent events. Many of the considerations we rely on most heavily when categorizing events as terrorism are relatively subjective – and require information that’s not available for days or weeks after an incident occurs. 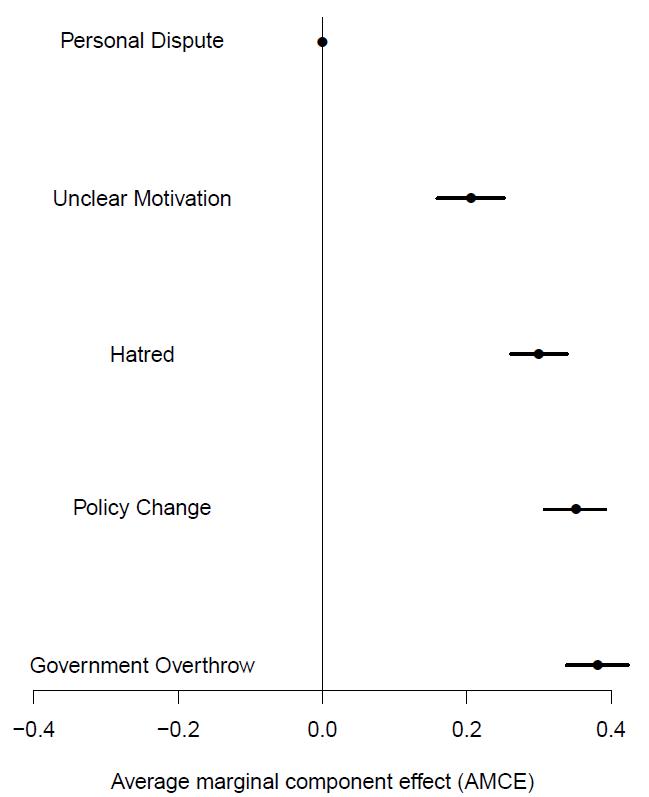 We then show the implications of our typology using machine learning techniques, allowing us to code a range of prior incidents that occurred in the real world to predict the likelihood that individuals will classify each event as terrorism. 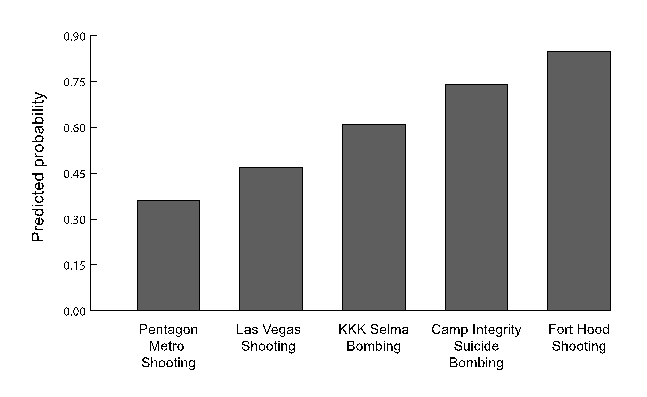 Several patterns in Figure 3 are striking, including the extent to which bombings perpetrated by formal organizations (such as the Taliban, Hamas, Hezbollah, ETA, and the Ku Klux Klan) are the types of incidents most likely to be perceived as terrorism. Perhaps most interestingly, we see that the Las Vegas shooting has a relatively low likelihood of being classified as terrorism. In order to better understand why this is the case, we generate predictive models derived from our experimental results to show how the estimated likelihood Americans will classify incidents with the characteristics of the shootings in Las Vegas, Nevada to show how we can construct a number of different, equally plausible narratives about the same event, leading to sizable differences in the likelihood individuals will understand the event as terrorism or not.

If we then describe the perpetrator as being motivated by policy goals, and omit the mention of mental illness, the probability of viewing it as terrorism increases to 66 percent. And, if we hold all else equal and suggest the perpetrator was Muslim, the probability increases again to 73 percent. These simulations thus illustrate the extent to which social categorizations play important roles in how we think about terrorism.