In the past two decades, 29 states and Washington DC have liberalized their laws on the use of medical marijuana – in defiance of federal regulations. A. Lee Hannah and Daniel J. Mallinson look at why some states have become ‘defiant innovators’ in this area. They find that if a state is more liberal and less religious, if the state has access to the direct initiative, and if they see other ideologically similar states acting, they are more likely to adopt more liberal medical marijuana policies. By contrast, the position of the federal government and internal fiscal pressure or from citizens had little effect on adoption.

For decades, the federal government has imposed strict regulations and sanctions on the use of marijuana. Yet, since 1996, twenty-nine states and the District of Columbia have acted on their own accord to develop programs that regulate the access to and sale of medical marijuana in explicit defiance of federal law (Figure 1). It is curious that a plurality of state governments and voters have created policies with disregard for federal policy. What inspires them to create policies in direct opposition to federal policy? 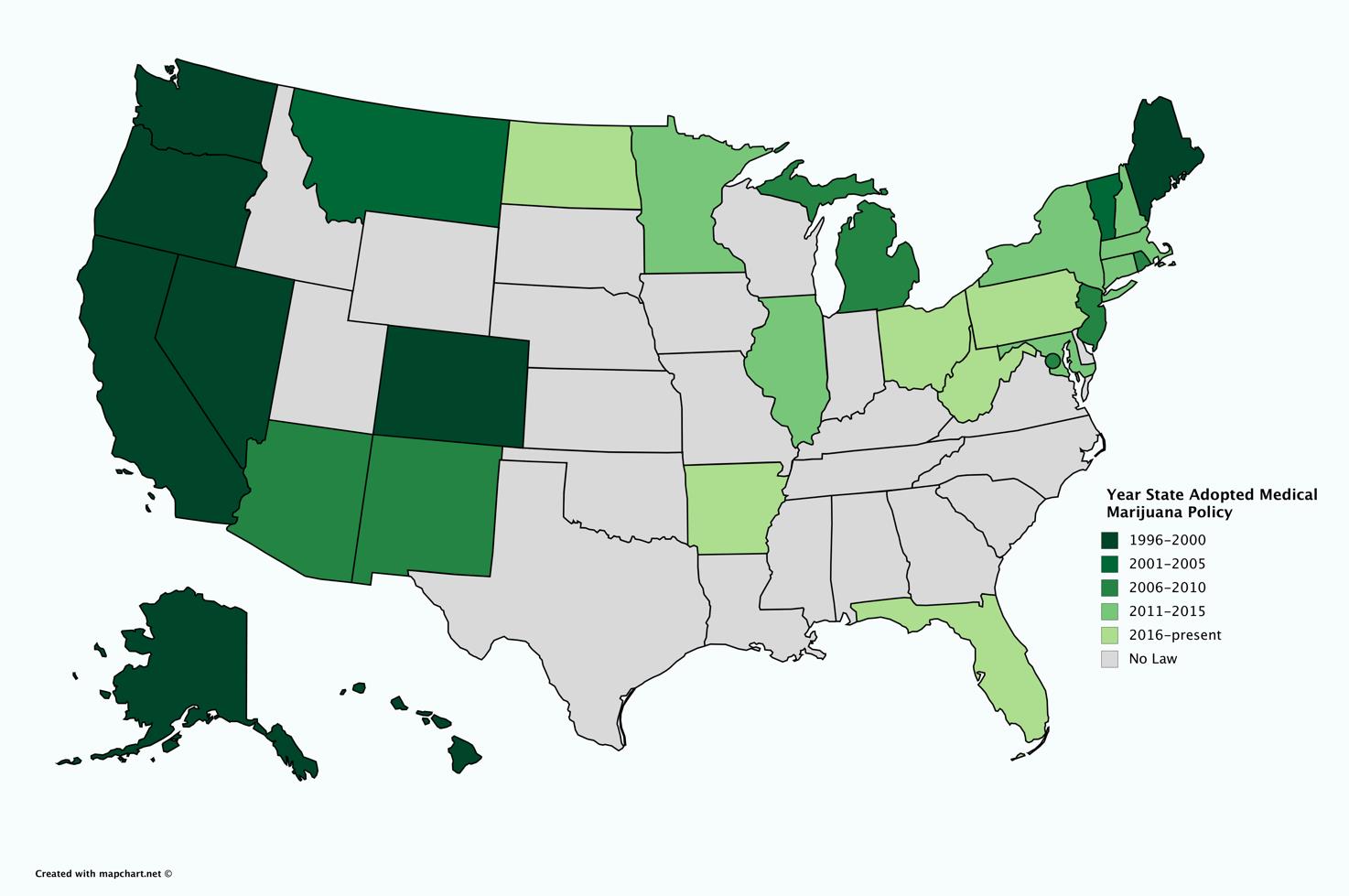 We call this phenomenon defiant innovation – a process whereby states, through ballot initiatives or the legislature, pass laws that not only circumvent, but also reimagine, federal law. This is distinct from acts of defiance, like resisting federal mandates, because there is the active creation of a new policy regardless of federal law. And while defiant innovations can occur in other policy areas (e.g. recreational marijuana, issuing benefits to immigrants, etc.), we set out to understand the spread of state medical marijuana programs. Consider that when California voters were considering a medical marijuana ballot initiative in 1996, President Clinton’s drug policy coordinator questioned using “Cheech and Chong logic to guide our thinking about medicine”. And while concerns about medical marijuana policy may seem passé to modern readers, these policies are still viewed as controversies in many local communities tasked with implementing the law. Moreover, twenty-one states have not adopted a medical marijuana program.

Even though the federal government remains steadfast in its official marijuana position, different presidential administrations implicitly and explicitly signal varying approaches to marijuana enforcement. While Attorney General Jeff Sessions is resolute in enforcing the federal prohibition on marijuana, President Obama’s Justice Department provided states some space to experiment with their marijuana programs. That said, Obama faced criticism for the mismatch between his rhetoric and actions due to increased raids on dispensaries during his first term in office. Thus, the implicit and explicit signals sent by the federal government can vary even within administrations. 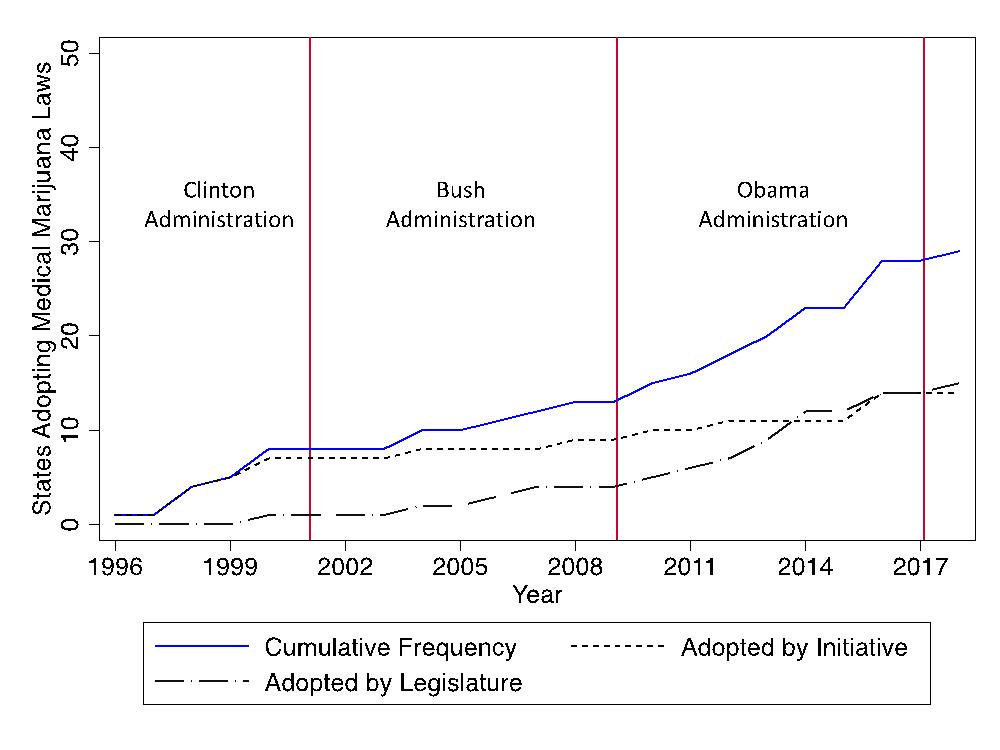 “Medical Marijuana Dispensary” by KayVee.INC is licensed under CC BY NC SA 2.0

Meanwhile, we find support for the effects of the state’s internal characteristics and capacity: state liberalism, state religiosity, and the initiative all affect the likelihood of adoption. A one standard deviation increase in a measure of state liberalism results in a 145 percent increase in the odds of adoption. A one standard deviation increase in evangelical adherents leads to a 130 percent decrease in the odds of adoption. And states with the direct initiative are three times as likely to adopt a law. Surprisingly, states facing pressure either fiscally or from potential patients or other marijuana users are no more likely to adopt. This leaves an open question as to what extent legislators and citizens view medical marijuana policy as a potential “green rush”.

But there is still a broader national context that influences state adoptions. While the federal position appears to matter little, states are more likely to adopt if ideologically similar states do. This fits with a broader theory that, on many policies, states are more likely to follow their ideological neighbors rather than their physical neighbors. This fits recent trends that state legislatures are reflecting the influence of a national agenda that is spread through the states.

Our research shows that medical marijuana policies are much more likely to be adopted when proponents of the policy have the political or institutional capital, rather than a medical or fiscal need (i.e. demand). Second, states are more likely to step out into marijuana policy if they observe ideologically similar states acting. Moreover, a state’s capacity appears to be independent of the federal government’s real or perceived position. The Trump Administration will expand this test environment as their position is likely to promote continued defiance in both medical and recreational marijuana policies. Of course, we cannot anticipate all of the dynamics in this current environment. Pressing issues such as the opioid crisis might radically shift coalitions on medical marijuana.

Most research on the spread, or diffusion, of state policies assumes that the federal government is either supportive or at least neutral towards state policies. But state and local defiance are also relevant in the American federal system. Developing an understanding of why states defy the federal government is timely in an age where states are using “uncooperative federalism” to resist the impact of the Trump Administration’s policies. From recreational marijuana, to environmental policies, to education policies, and more, uncooperative federalism sometimes means resistance, but can also mean the creation of innovative policies that stand in defiance of the federal government.