The US’ demographic landscape continues to shift; now the majority of babies are born to minority groups, and this presents a huge public policy challenge for the coming decades. Kfir Mordechay writes that educators and policy makers must consider all possible strategies, including housing assistance and creating more specialized schools, to improve the educational outcomes for this new and diverse majority of American students.

For almost two centuries after the first official census in 1790, the population of the US was between 80 and 90 percent White. Now the country is on a path towards an unprecedented level of demographic diversity. In 2013, the nation hit a tipping point, where for the first time in history most of the babies born were members of minority groups. As the demographic landscape of the country continues to shift, it is America’s great metropolitan centers that are fueling the transition to a majority-minority country.

This shift ushers an important challenge for public schools and society at large, as this new generation of toddlers approaches school age. Overwhelmingly these children come from groups that are living in poor and segregated neighborhoods with inadequate public schools.  For this new wave of students to flourish we must begin to find ways to offer minority students more access to good schools with a clear path to college. This cannot happen in a policy vacuum; it can only be realized through effective school and housing policies that promote diversity.

In 36 of the country’s largest metropolitan areas, populations have already passed the toddler (age 0–5) majority-minority threshold. In New York and Los Angeles, the country’s largest metros, more than 2 out of 3 toddlers are non-white. Economically, these two metros combined produce more than 46 US states —surpassed only by Texas, Florida, California, and New York. Of the nation’s 10 largest metro areas, which combined make up more than 25 percent of the US population (over 85 million people), all but one have hit the majority-minority mark for their toddlers. The Economic output of America’s 10 largest metropolitan areas listed in Figure 1 each rank among the 50 largest economies on the planet. Given the overwhelming economic role these powerhouse regions play for the vast majority of Americans and as dominant drivers for global economic growth, we argue for a keen focus on their future prospects. 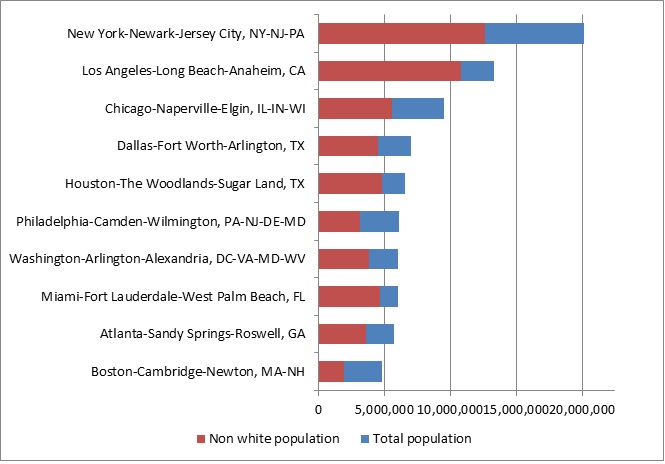 This shift in the nation’s racial and ethnic makeup poses challenges for the country’s public schools and society at large. These challenges include more students living in poverty, and in segregated neighborhoods, particularly for the country’s rapidly growing Latino school-aged population. Between 1990 and 2015, America’s Latino school-aged population has more than doubled, increasing from 5.3 million to more than 12.8 million and now makes up almost a quarter of the age 5–17 population (see Figure 2). According to a UCLA study, as their numbers have risen, this group has also seen the most dramatic increase in school segregation. Segregation is linked to numerous negative academic and social outcomes. Segregated schools have less qualified teachers, more teacher turnover, less stable student enrollments, and less challenging curricula.

“IMG80” by US Department of Education is licensed under CC BY 2.0

As Figure 2 shows, a quarter century ago, 7 out of 10 school-aged children were white—but today, that number is more like 1 out of 2. Educators and policy makers must consider all possible strategies to improve the educational outcomes for this new and diverse majority of American students. A majority that is overwhelmingly concentrated in the nation’s metro regions and whose success is inextricably linked to the future economic prosperity of the nation. 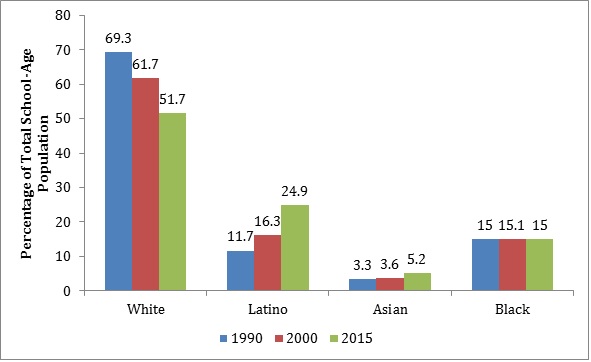 Although this demographic transformation poses vital challenges for the country’s schools and our society, this ongoing diversity explosion should be greeted with optimism. It provides opportunities for revitalizing our country, energizing our labor force and providing greater connectivity to the global economy. However, this means we must find workable solutions that offer these students more access to better schools.

In thinking about these solutions, it is especially important to keep in mind the range of metropolitan community contexts. Achieving such solutions will require addressing the current lack of policy through implementing targeted approaches that underscore the deep and fundamental relationships among housing, communities, and schools.

School authorities should work with housing, municipal, and city planning officials to pursue stable student integration as changing demographics continue to alter the nation’s growing urban centers. Both the Department of Housing and Urban Development and the Department of Education should work together to coordinate housing assistance with educational opportunity with the goal of racial and economic integration. Maryland’s Montgomery County in suburban Washington, DC, provides a useful case for how economically integrative housing can have substantial schooling effects for low income students.

We must reconsider the role of schools and how they can equip the next generation for a future that is certain to be increasingly global and multicultural. The current trends toward resegregation and failure to educate the growing non-White majority of children threaten our common future. It is time for educators to recognize that doing nothing is accepting resegregation and to point the path to better alternatives