With its potential to increase tax revenues and economic development at an environmental cost, fracking is a controversial practice across the American states. In new research, Nicole Kalaf-Hughes and Andrew Kear examine why some Democrats vote for fracking and some Republicans vote for greater environmental protections. They find that how the issues are framed through messaging, spin and political communications helps determine what legislation state lawmakers will support.

The US shale gas era ushered in by hydraulic fracturing (fracking) and horizontal drilling technologies has exploded from obscurity to public controversy. Should fracking be banned as in some European countries, US states (New York), cities (Colorado), and counties (California) or be allowed but regulated? As energy breadbaskets and veterans of natural resource conflicts, western US states know the ups and downs of such booms but struggle with balancing the environmental costs and economic benefits.

In a recent work, we use Colorado, New Mexico, and Wyoming as our policy test cases, and explore this controversy and how economic and environmental frames in natural gas bills influence Republican and Democrat voting behavior. Surprisingly, legislators often cross party lines with Democrats voting in favor of development legislation and Republicans voting in favor of environmental protections. Why do state legislators cross party lines? The answer lies in how the issue is framed.

The stark contrast between these competing definitions belies the complexity and nuance of natural gas issue framing. Frames are strategic, contested, and evolving communication messages emphasizing particular aspects of a policy problem that shape people’s opinions, preferences, and attitudes. Encompassing more than just spin, frames help expand the scope of the conflict, increase political mobilization, determine winners and losers, connect the issue to a broader audience, and if done effectively enable political compromise.

Our findings suggest a legislator’s position on natural gas development depends on the effectiveness of the issue frame within in the text of the legislation. Partisanship and ideology are important determinants of political decision making but issue framing sets the terms of the debate. Therefore, depending on how the issue is framed, both Republicans and Democrats may vote in ways that defy perceived partisan biases.

Which ear, or side of the political aisle, one hears from often determines which frames resonate. These competing environmental and economic arguments often find balance in a win-win frame. This emphasizes that everyone can benefit and no one thing must be forfeited to acquire something else from a proposed policy, is politically preferable. Consider a bill with both an environmental and economic focus. If the end result is preservation of the status quo and development, there is a greater likelihood of legislator support, as legislation framed in a way that emphasizes economic and environmental gains is a win-win for all involved.

To explore state legislative framing effects, we performed content analysis on all natural gas related state legislative bills for Wyoming, Colorado, and New Mexico from 1999 through 2008; which spans the early boom time. We then coded each natural gas bill more holistically with respect to its effect on the status quo. The status quo policies in these states are designed to facilitate exploration and production, protect mineral rights, reduce waste and generate revenue; in short the policies are pro-development at both state and federal levels. Because each bill contains a different number of frames, we use a ratio of environmental to economic frames to account for the framing of the bill as a whole.

“Activists protest fracking outside Gov. Cuomo’s office, New York” by CREDO.fracking is licensed under CC BY 2.0

Voting against the party? 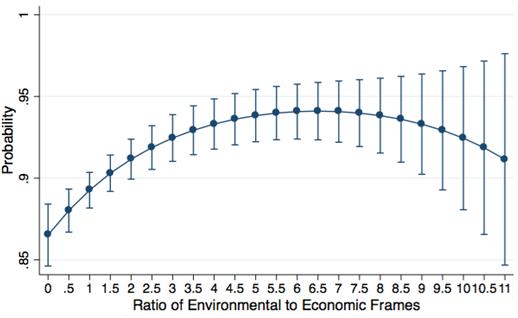 With respect to status quo challenging legislation – policies that aim to restrict development – we find Republican legislators are significantly less likely to vote in favor of this legislation. However, as shown in Figure 2, partisanship conditions the effect of framing on legislation restricting development. Unsurprisingly, Democrats will consistently vote for restrictions on natural gas policy, regardless of the framing ratio. Surprisingly, Republicans will also vote for restrictions when the environment to economy ratio is even or in cases where a bill emphasizes environmental interests over economic interests by 2:1. 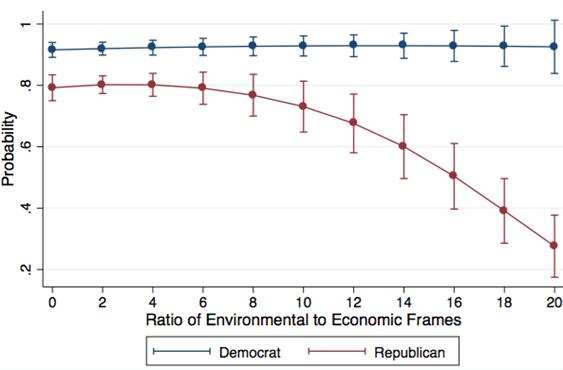 When do Republicans support anti-development legislation?

Republicans are less willing to support status quo challenging legislation as the number of environmental frames increases relative to the number of economic frames; indicating an unacceptable trade-off (Figure 2). These results indicate that Republicans will vote in favor of status quo challenging legislation when the bill is framed in such a way as to present more economic reasons for doing so, when there is an even distribution of environmental and economic frames, or even up to a 4:1 ratio of environmental to economic frames, an illustration of strategic framing resonating across the partisan divide. However, the effect only lasts so long, and as the number of environmental frames in an anti-development bill increases, Republicans are significantly less likely to offer support for this perceived trade-off. Thus, we can see legislator positions are shaped by how an issue is framed, offering a potential way to overcome the fixed positions that often contribute to legislative gridlock.

Frames play a key role in legislative position-taking and the results indicate they can influence members in different ways across different types of bills. Natural gas policy framing in the Rocky Mountain West demonstrates the dynamic nature of issue framing and illustrates how the predominate competing interests, in this case the economic and the environment, can shape legislative behavior. As hydraulic fracturing gains traction across the country, we can expect an increased scholarly and popular interest in the motivations and mechanisms behind how state legislators make decisions.