Competition for Amazon’s HQ2.0 shows how keen local governments are to offer incentives to attract firms.

Competition for Amazon’s HQ2.0 shows how keen local governments are to offer incentives to attract firms.

The online mega-retailer, Amazon.com, has recently been shopping around to find a suitable host for its second headquarters. In response, city and local governments across the US have been falling over themselves to offer economic inducements for the company to choose them. But what determines which governments try to attract firms in this way? In new research Eric Stokan looks at the characteristics of local governments which make use of economic development incentives for firms and those that do not.

Where will Amazon locate its proposed HQ2.0? While we do not know yet, we do know one thing:  there is no lack of competition between states and local governments over attracting the online retail giant’s second headquarters.  State and local governments are competing to attract the coveted, high-paying jobs that have the potential to transform whatever locality the firm selects.  The potential impacts are so great that towns like tiny Stonecrest, Georgia voted to change its name to Amazon if the retailer moved there.  The government of Tucson, Arizona sent a 21-foot cactus as a means to lure the company, which fortunately for the sake of the cactus the company promptly returned.  Several mayors used videos with Amazon’s interactive assistant Alexa to convince Jeff Bezos that he would benefit from locating his company within their communities.   New Jersey, despite its fiscal woes or maybe in light of them, agreed to pay $7 billion in tax breaks to the company to elicit these jobs.  John Oliver even dedicated a 20-minute segment to the topic.

While Amazon is unique in the extent to which it has publicly sought these incentives, its tactics of seeking them is all too common. Louise Storey, in a series of New York Times articles in 2012, found that states and localities used economic development incentives to attract firms at the tune of more than $80 billion per year.  So, what compels governments to engage in this competition and use these incentives? This has been the subject of much research, including my own.

I find that characteristics beyond the control of the local government often have an impact on the decision to offer local economic development incentives.  States, for example, must provide statutory authorization to use policies like tax abatements, tax increment financing, and enterprise zones.

So, one may wonder what factors will lead governments to offer business incentives like these to attract Amazon’s HQ2.0?  The following is a list of factors present in the municipality that can influence whether economic development incentives are offered: 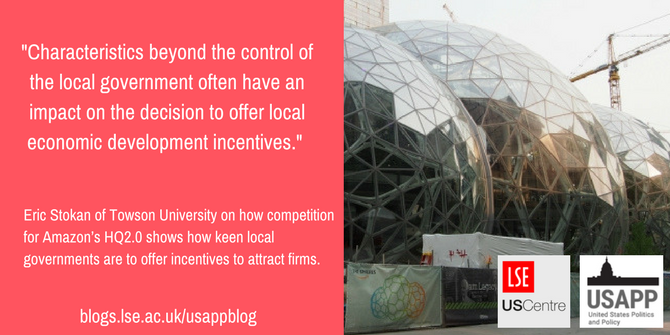 “Amazon “Bubble“” by Neil Hodges is licensed under CC BY NC SA 2.0

I also found a number of barriers to development:

The final aspect that is strongly related to the usage of all three policies studied (tax abatements, TIFs, Enterprise zones) was the year in question (1999, 2004, and 2009).  As time went on, municipalities were more likely to use each of the three policies. Given that firms are increasingly mobile, often operate across many locations, and that governments are increasingly competing in a global marketplace, it is more likely that more governments will use these kinds of inducements. Competition over firms’ locations, perceived and real, is effectively increasing over time and is highly associated with the usage of these incentives.

My research suggests that we need to think carefully about the factors that lead us to use more incentives.  This is particularly true since these incentives are not always justified on cost-benefit grounds, and in other recent work with my colleague Aaron Deslatte, we find that adoption of these traditional financial incentives may come at a cost to commitments to long-term environmental sustainability policies.  Thus, more research is needed on understanding the political dimensions of these decisions since we know that the economic justification for their usage is not always warranted.

Eric Stokan – Towson University
Eric Stokan is an Assistant Professor of Political Science at Towson University.  His research is focused on explaining why local governments use economic development incentives, what impact those incentives have on economic growth, and the role of political competition and fragmentation in economic development.  His recent work has been featured in Urban Affairs Review, State and Local Government Review, and Economic Development Quarterly.