Party activists play an important role in contemporary US politics; they attend rallies, campaign, fundraise, vote, and donate money to candidates. But we should not think of party activists as one homogeneous group of like-minded people with extreme views write Nathaniel Birkhead and Marjorie Randon Hershey. In their analysis of political participation and ideology, they find that different forms of political activity attract different types of individuals – with some forms clearly associated with extremism, while others much less so.

American party activists – the citizens who work to promote their party – have long been identified as a causal factor in encouraging politicians to adopt ideologically extreme positions, which then causes Congress to be more and more polarized.  Despite the centrality of party activists in American politics, however, we know very little about them.  To start, there is no consistent definition for who is – and who is not – a party activist.  Moreover, as political scientist Larry Bartels notes, “we have no real scholarly consensus regarding the political views of party activists in contemporary America, much less a persuasive analysis of how they matter.”

In our new work, we argue that it is inappropriate to treat people who engage in political activities as one ideologically extreme and homogeneous group.  That is, while extremism motivates some forms of political activity, it has very little impact on others.  Our approach looks at activists by the content of their actions (what they are providing the politician) rather than the particular form of action (what they are doing).  In our research, we find that extremism is commonly associated with those who take part in candidate selection, who directly contact politicians, or offer resources to their campaign.

The Inconsistent Relationship between Extremism and Activity

To evaluate the extent to which activists are similar to one another, we predict their forms of political activity are a function of their own demographic and ideological positions.  We construct our measures of ideology using the respondent’s positions on issues ranging from the government’s provision of social services or health insurance to regulation of abortion to the appropriateness of affirmative action. 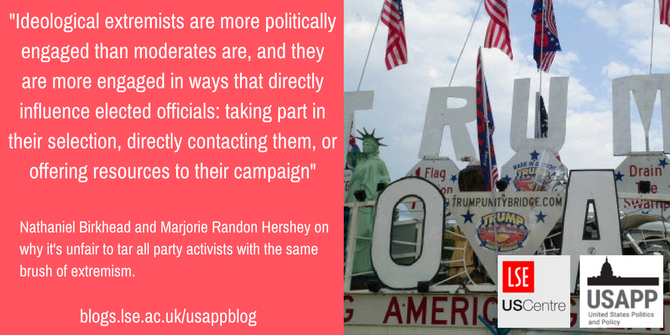 “Trump Bridge” by Brett Davis is licensed under CC BY NC 2.0.

We analyze the various forms of political activity that partisans might undertake – voting, attempting to influence others, attending a meeting or rally, working for candidate or party during campaign, displaying a button or sticker, and donating money to a party or candidate – that are consistently asked in surveys made by the American National Election Study (ANES) over time, and are most frequently discussed in academic literature on American party activists.  We estimate each form of activity as a function of ideological extremism, income, education, gender, partisan affiliation, race as well as year controls.  We find that the demographic factors have systematically different effects on participating, depending on the activity. 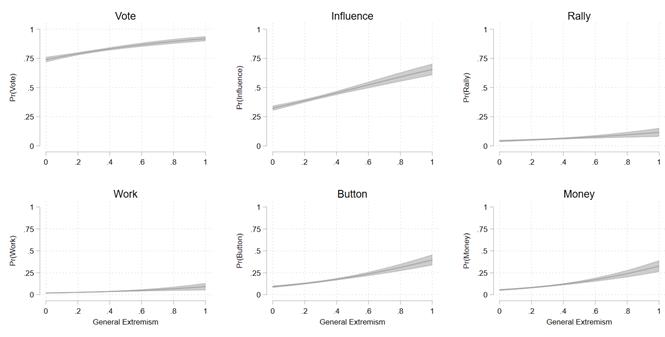 Effects of Extremism on the Mechanisms of Activist Influence

So how, in practice, are activists able to influence politicians (and therefore polarization)? Activists’ influence on the current level of political polarization could result from the resources they have to offer prospective candidates (such as the measures of individuals’ donations of time, money, and campaign effort), from their contact with candidates (which gives them the chance to convey information, such as contacting a House member), and/or from their central role in nominating candidates (measured by voting in a primary or caucus).

We evaluate the role of extremism in motivating citizens to engage in one of these three pathways for influence, finding that extremism is the most important predictor – even more so than education, income, or identifying as a partisan – of activity.  For example, moving from the lowest income to the highest income category increases the probability of providing resources to a candidate by 19 percentage points.  By contrast, moving from the most moderate to the most extreme ideological position increases the probability of providing resources by 39 percentage points. In short, ideological extremists are more politically engaged than moderates are, and they are more engaged in ways that directly influence elected officials: taking part in their selection, directly contacting them, or offering resources to their campaign.

Our work clarifies the theory and the data on the relationship between activists and political polarization. We offer empirical support for the contention that political activists are more likely to hold extreme attitudes than are other citizens. At least in American politics people with extreme attitudes toward political issues are more likely to take part in politics than moderates are.  This evidence is consistent with the argument that partisan activists may be vital culprits in the greater polarization of American politics in recent decades.

Our findings also show that it is unwarranted to approach the study of political participation as though different types of political activities are interchangeable. We find clear and theoretically interesting differences among types of political involvement with respect to the characteristics of the individuals involved and the specific issues on which they hold extreme views. Thus, political activists are not as uniformly ideologically extreme as has often been assumed.

Nathaniel A. Birkhead – Kansas State University
Nathaniel A. Birkhead is Assistant Professor of political science at Kansas State University.  He studies issues of representation, legislative organization, and political behavior.  His research has appeared in Legislative Studies Quarterly, Political Research Quarterly, and American Politics Research and he is finishing a book (with Jordan M. Ragusa) examining when and why Congress repeals major laws.