Methamphetamine (or meth) is widely associated with negative outcomes for those that use it, but there can also be costs to those who live close to where it’s produced. In new research, Bern Dealy, Brady P. Horn and Robert P. Berrens examine the effects of discovering that a meth lab is located nearby on house prices. They find that having a meth lab within one tenth of a mile decreases a home’s value by 6.5 percent, a decline that is not completely offset when meth labs are decontaminated.

As TV-watching economists, we followed the popular series Breaking Bad (2008 to 2013) with some interest. The fictional show was set in sunbaked Albuquerque, New Mexico and the surrounding areas, where we happened to be teaching and researching economic issues relating to health and the environment. The show’s protagonists start off cooking methamphetamine (meth) out of a recreational vehicle driven into the Albuquerque hinterlands. Eventually, their operations move indoors to temporary labs set up in homes located in residential neighborhoods. The series’ all too believable episodes caused us to speculate that the full set of damages from risky behaviors such as meth abuse include not only the direct impacts to drug users and their family, but also possible spill-over effects onto local residential neighborhoods.

In the US, meth use has increased substantially in recent years. While meth is widely known to be associated with violent behavior, risky sexual behavior, child abuse, other costs may exist. Homes left contaminated by the production of meth could present health risks, or affect the values of other nearby properties. The emergence of new public databases on actual meth lab discovery show that transient production facilities have been popping up and producing for some time, until they are either discovered or abandoned. Our research investigates whether the discovery of a meth lab, or in some cases, multiple meth labs in a residential neighborhood impact surrounding real estate prices? Moreover, did this only happen in low-income neighborhoods? Would there be a stigma effect on proximal properties after a meth lab had been decontaminated? While home sale data is scarce in New Mexico (due to non-disclosure laws), meth labs have been discovered in all 50 states, so our choice of research area was not limited to the region featured in Breaking Bad. We ventured to the greener lands of western Oregon along a major interstate corridor, where we found publicly available home sale data, and matched it to a restricted-use meth lab dataset provided to us by the Oregon Health Authority Clandestine Drug Lab Program.

In our work, we used the hedonic pricing method to explore the effect of meth lab discovery on house prices. Of course, one challenge in researching this question is that meth producers could naturally choose to locate in areas where property values are already relatively low. Unless we control for this possibility, our study could produce misleading results. To do this, we compare the difference in home prices between a “treatment’ group, which are very close to a meth lab (within 0.1 miles) and a “control” group, which are close to a lab, but slightly further away (between 0.1 and 0.3 miles).  Figure 1 illustrates how the treatment and control groups are assigned based on proximity to the lab and Figure 2 illustrates the change in price trends between the treatment and control groups before and after the discovery of a meth lab. 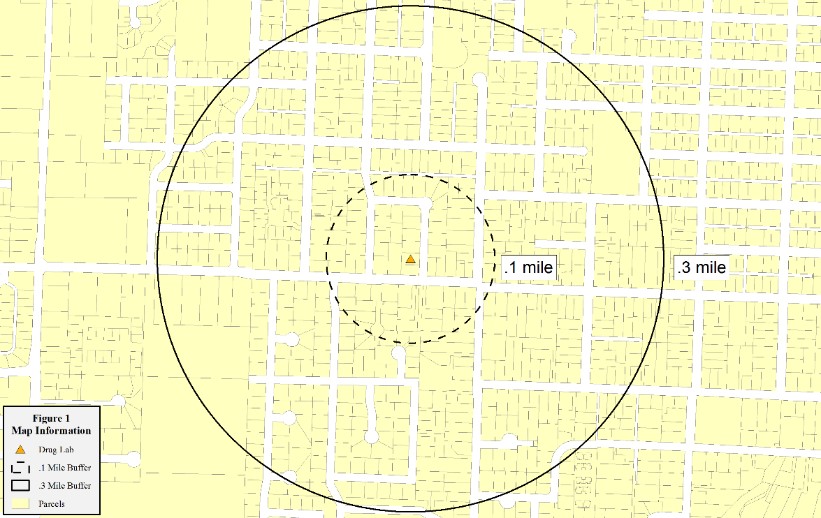 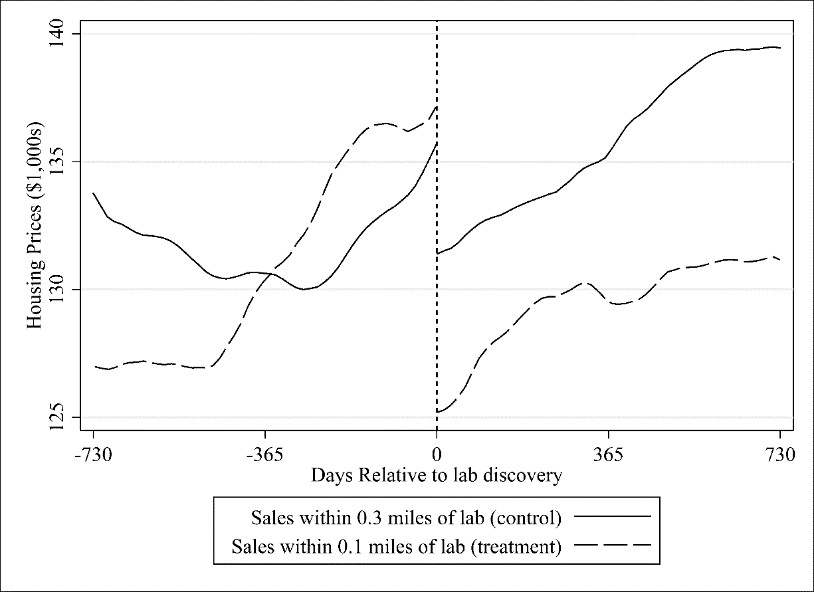 Overall, econometric results indicate that meth labs in fact were discovered more often in neighborhoods where home prices were already somewhat lower. But, even after controlling for this difference, we find that the discovery of a meth lab causes the price of homes within one tenth of a mile to decrease by approximately 6.5 percent. This amounted to a considerable overall reduction in property values. The average home in our study declined approximately $9,314 in 2013 dollars, and on average, 18.24 homes were located within one tenth of a mile of a meth lab. Thus, approximately $170k in home value was lost per meth lab. 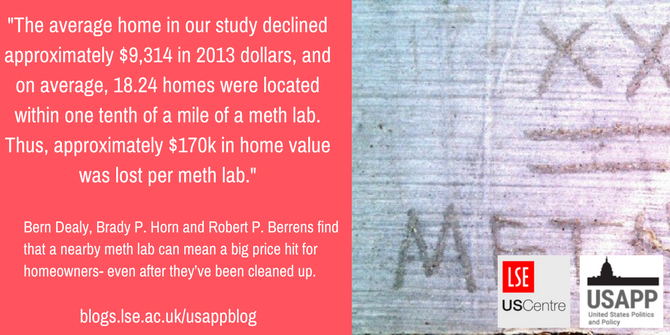 While the impact of a meth lab on property values may seem obvious, the public policy solutions are less obvious. Approximately half of the 50 states (including Oregon) have adopted laws that require meth labs to be decontaminated. Fortunately, the data provided to us by the Oregon Health Authority Clandestine Drug Lab Program includes data on lab decontamination. Thus, we can investigate the impact of meth lab cleanup on home prices as well. Our analysis finds that decontamination following meth lab discovery generates just over a 5 percent increase in home prices. For the average home in our sample, that amounted to an increase of approximately $7,216 in 2013 dollars. When applied to the homes within one tenth of a mile of the lab, this amounts to an approximate $131k gain in surrounding home value per lab decontamination. In terms of cleanup costs, the average lab costs $25k to decontaminate and the total cost associated with administration of the Oregon decontamination law are approximately $75k annually. Thus, it appears that mandatory cleanup laws could generate considerable, positive net benefits. However, meth lab cleanup does not completely offset the negative impact of meth discovery. Decontamination only offsets approximately 75 percent of the decrease in neighboring home values. This suggests that the discovery of a meth lab causes a stigma effect in the neighborhood that persists even after the home used to manufacture meth is decontaminated.

In addition to the direct benefits of decreasing local meth production (e.g., reductions in crime, child abuse, etc.), there are also important indirect benefits in disrupting and mitigating the negative effects on neighborhood home values. State laws mandating meth lab decontamination were adopted to help protect future homebuyers from invisible health hazards. However, these laws also appear to help to mitigate the negative impact the discovery of the labs have on nearby home values. Moreover, decontamination programs appear to yield significant positive net benefits.