For low income minority women in Detroit, traveling to meet their family’s needs is a daily battle.

For low income minority women in Detroit, traveling to meet their family’s needs is a daily battle.

In recent years, for many the city of Detroit has been a poster child for America’s rust belt decline. And while the urban core of the city has been consolidating, it still presents many challenges for those who need to travel within it. Jieun Lee, Igor Vojnovic, and Sue C. Grady explore the class and racial elements of these challenges, finding that, compared to men and those in the suburbs, for low income mothers of color, living in inner-city Detroit means traveling more often and for longer distances to fulfil basic needs such as work, healthcare and food shopping.

In their everyday lives, people make numerous choices in deciding how to navigate through urban spaces. Those decisions often reflect not only their culturally expected and socially defined responsibilities, including gender roles, but also the ease of travel through the city, particularly between the places that they want to go between. In cities with growing low-density suburbs, especially those whose urban cores have been hollowed out through a lack of investment (a trend that we see in many US rust belt cities) who someone is can often have a big influence on where they are able to go. By looking closely at urban environments we can see the particular burdens of place in neighborhoods experiencing extreme disinvestment and decline, where race and class emerge as fundamental in shaping travel behavior.

In new research, we explore the challenges that Detroit’s urban poor and minorities in declining inner-city neighborhoods face just in meeting basic daily needs. In this regional spatial structure characterized by low-density suburban dispersion and extreme central city decline, we found that low-income, visible minority populations segregated in the urban core suffered the greatest transportation burdens. There was also a clear gender dimension to travel within these racially segregated and socioeconomically disadvantaged neighborhoods, with women, and particularly low-income single-mothers, facing complex and multi-dimensional challenges in reaching necessary daily destinations, including healthy food options and personal services, such as health-care.

We found that the majority of urban Detroit neighborhood residents were low-income and non-white, the vast majority of them are African Americans, while the majority of suburbanites were middle- to high-income and white. There were also stark differences in family structure. Among urban Detroiters, well above two-thirds were not married with dependent children, while in the suburbs, some three-quarters of the population were married. In addition, continuing disinvestment and the decentralization of urban opportunities such as jobs, retail, and personal services accentuated the spatial dichotomy between urban and suburban residents. In fact, despite the higher densities, mixed land uses and connected street networks within the city, access to basic daily amenities has severely deteriorated within the urban neighborhoods. These striking differences between urban and suburban populations are, in part, the results of a long history of intolerance, racism and racial residential segregation that has prevailed across the Detroit region. 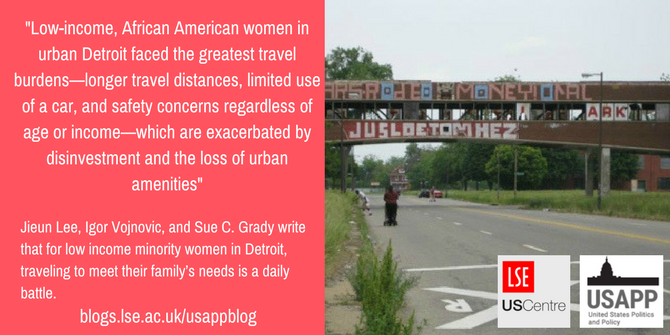 Also, as seen in many American metropolitan areas, we found that residents living in neighborhoods with higher densities, mixed land uses and connected streets tend to drive less and walk more. We explored detailed travel behavior of both women and men for various travel activities including work and non-work trips, such as shopping, personal services, restaurants and leisure. We found women’s daily travels heavily reflected their gender role – wife, mother, and caregiver to other family members—regardless of where they live in suburbs or inner city neighborhoods. They still traveled far more frequently and longer distances for shopping and personal services than their husbands or male partners who traveled mainly for work and interestingly leisure and restaurants.

Men also traveled much longer distances for their work, and particularly by car, while women were likely to make shorter work commutes probably in order to attend to their multiple roles as workforce participant, housemaker and mother. Our results also revealed that similar to women in wealthy suburbs, women in urban Detroit—in predominantly low-income, African American neighborhoods—traveled substantially shorter distances by car for work commutes than urban Detroit men.

Moreover, childcare responsibility significantly influenced women’s daily travels. Regardless of the neighborhood type, women with dependent children drove to work fewer times and shorter distances than women with no dependent children, which reconfirmed mothers’ efforts to minimize their travel budget (i.e. time and distance) on their commutes for household responsibilities, including childcare. However, for shopping and personal services, mothers in the Detroit region drove more times and longer distances than women without dependent children. In addition, owing to lower-incomes and lack of a private car, urban Detroit mothers were forced to travel by foot or public transit for longer distances to meet their family needs compared to all other respondents. With disappearing urban amenities, such as jobs and retail in inner city Detroit, women’s trips for employment and shopping have become excessively long journeys, whether by walking, cycling or public transit. For example, on a weekly basis, urban Detroit women travel 26.3 miles for shopping by non-car modes (walking, cycling, or taking public transit).

Our research reveals that women with dependent children drove most frequently among all groups, and all neighborhoods, for shopping and personal services, reflective, in part, of their childcare responsibilities. In addition, residents in urban Detroit travelled longer distances for their daily activities than suburban residents in similar built environments—denser developments with mixed land uses and connected streets—which illustrates the impaired accessibilities that the low-income, African American urban residents confront. Despite the built environment, urban Detroit residents function like residents living in low-density, dispersed suburbs, a result of urban disinvestment and decline. In fact, to access various basic daily urban amenities, including healthy food options, personal services and health-care—urban Detroit residents travelled on average greater distances than the wealthy living in low-density, dispersed suburbs.

Socio-economic variables in urban Detroit shape how people travel. In urban Detroit, class and race emerge as even more relevant than the urban form in shaping travel, with distinctions and restrictions in mobility within this environment accentuating differences in burdens by gender. Low-income, African American women in urban  Detroit faced the greatest travel burdens—longer travel distances, limited use of a car, and safety concerns regardless of age or income—which are exacerbated by disinvestment and the loss of urban amenities, potential nearby destinations, within the inner city neighborhood.

Our research shows that living in highly-segregated neighborhoods which have experienced disinvestment and decline makes travel difficult for the low-income African American women who live there. Every day, they face challenges in reaching basic destinations, including shopping for food, personal services and health-care for themselves and their families.

Jieun Lee – University of Northern Colorado
Dr. Jieun Lee is an urban and economic geographer and specializes in the areas of transportation, urban design and land use planning and policy, with a focus on gender, socioeconomic, racial and health disparities, and marginalized communities.  Dr. Lee has several academic publications, including in the Journal of Urban Design and Journal of Urban Affairs. Previously she was a researcher at Seoul Development Institute in Seoul, Korea, where she contributed to several monographs on urban development, and was named Researcher of the Year in 2005. She is currently an assistant professor in the department of Geography and GIS at University of Northern Colorado.

Igor Vojnovic – Michigan State University
Dr. Igor Vojnovic is a Professor in the Department of Geography, Environment and Spatial Sciences at Michigan State University. He also holds appointments in the School of Planning, Design and Construction and the Global Urban Studies Program. His main area of research focuses on urban (re)development processes, involving a range of issues, including urban governance, gentrification, infrastructure investment, physical planning, and urban design. Dr. Vojnovic is also the Editor in Chief of the Journal of Urban Affairs.