For many in the US, the rent is still too high – more than a quarter of US renters pay more than half of their income on housing, and ten percent of this group receives government housing subsidies. In new research, Judy Geyer examines how housing vouchers influence where people choose to live. She finds that when the maximum allowable voucher amount can vary by neighborhood, rather than being capped for an entire city or town, then recipients are more likely to choose to live in neighborhoods with lower crime rates and better schools.

US Housing price rises, particularly in urban areas, are increasingly a financial burden on many households. In 2015, 37 percent of US households rented their home. That same year, the typical renter household had an annual income of $37,900 and more than 26 percent of renters paid more than 50 percent of their income in rent.  Roughly 10 percent of these renters receive rental housing subsidies from the government.

Rental housing subsidies can greatly improve the financial wellbeing of low-income households. Housing subsidies also affect where you live. Where people are able to live is important to study because the quality of your neighborhood affects your physical health, mental health, happiness, and well-being. Low-income households are especially vulnerable to stress and depression.

In our research, we find that how the government supports low-income households matters. By providing housing vouchers which have caps that can vary by neighborhood rather than by city or town, policy makers can be far more effective at moving those who receive them to better neighborhoods, and at a much lower cost than some alternatives.

When might it make sense for the government to entice low-income households to live in a particular location? When governments spend public funds to build units designed for low-income households, they are encouraging those households to live in a particular place. Over the last century, most US subsidized housing policy focused on “place-based” subsidies, which were aimed at increasing the supply of affordable units in particular areas of towns and cities. Currently, the majority of US renters who benefit from housing subsidies live in rental units specifically built or designated as subsidized units.

Place-based subsidies mean that the money is tied to a specific location, not the tenant. If the subsidized tenant wishes to live on a different street, a different neighborhood, or different city, they would lose their housing subsidy unless they found another available, subsidized unit. Long waitlists for subsidized units make it very difficult to switch units. So, why are place-based subsidies so popular? They certainly help provide special-needs housing for low-income individuals with disabilities, who would have little to no good options in the private housing market. Place-based subsidies also create affordable housing in areas where there would certainly be none, such as in midtown Manhattan.

An alternative to place-based subsidies is tenant-based subsidies. The US Housing Choice Voucher program, serves roughly 2.2 million people in the US. In this program, the subsidy follows the person rather than a home. The advantage of a tenant-based housing subsidy is that households have a lot more flexibility to choose a location. If the location turns out to be a poor choice, the household can move and take their voucher with them. This subsidy design frees policy makers from choosing which neighborhoods are “good” for the subsidy recipient. 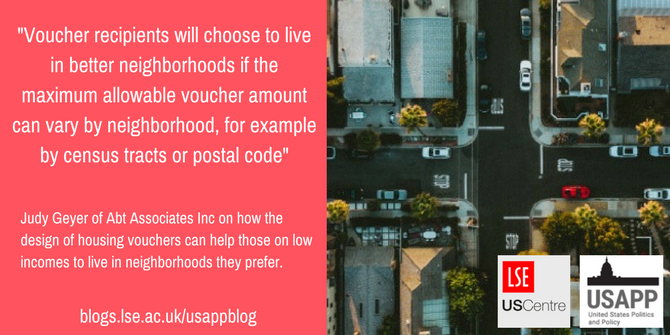 Regardless of elements that may deter a voucher recipient from considering far better neighborhoods, our research shows that the design of the housing choice voucher can affect neighborhood choice. How can policy makers compare different designs of the voucher program rules? One method is to use experiments to study outcomes of alternative policies. However, experiments are expensive, and it can take a long time to track household outcomes. To compare many different policy designs or even just to figure out what kinds of experiments to run, it can be helpful to build simulation models.

While politicians debate the merits of supply-side subsidies versus demand-side subsidies, policy researchers continue to look for evidence of promising voucher policy design. With millions of households paying more than 50 percent of their income to rent their home, cost-efficient policy options to alleviate housing burdens and to facilitate access to quality neighborhoods will continue to be one of the hot research topics in US policy debates.

Judy Geyer – Abt Associates Inc
Dr. Geyer is an economist at Abt Associates Inc., a public policy consulting firm in Cambridge, MA, and has taught courses at Tufts University and the Massachusetts Institute of Technology. Her research focuses primarily on household economic behavior, especially as affected by a range of programs including insurance, subsidies, and reward programs.  She holds a PhD in economics from Carnegie Mellon University.