Donald Trump’s 2016 election victory in part reflected deep cultural opposition to Political Correctness (PC) norms. People dislike being told that they are not allowed to speak their mind, and Donald Trump represented a cultural foil to express that frustration.  New research from Lucian Gideon Conway III, which studies the 2016 election campaign, shows that a sample of moderate Americans were influenced to support Trump by a brief mention of the PC movement, even though the PC movement was framed positively and the discussion had nothing directly to do with either candidate. Taken together, these results suggest that we need to look beyond simple markers of ideology to understand the Trump phenomenon – part of his support stems from a cultural revolt against Political Correctness.

There is a tendency to think of Donald Trump’s surprising ascendency to the US presidency as the result of extreme right-wing politics.  And while that is partially true, it isn’t the whole story.  In fact, part of the reason Trump won doesn’t involve conservative ideology at all.

What it does involve is actually rather simple: People don’t like to be told that they can’t say certain things, and Trump represents a say-anything voice.  Consider “political correctness” (or “PC”) norms.  PC norms try to limit what people are and are not allowed to say about groups.  Now I’m personally a fan of the goals of those norms, but whether you are a fan of them or not, their existence has side effects.  One of those side effects is that people (even people who agree with the goals of the norms) often don’t like being told they cannot say something.  Restrictions on their freedom make people mad.

Evidence that an anti-PC revolt put Trump in power

Did this actually matter in the election of Donald Trump?  Yes.  To illustrate, during the US presidential election of 2016, we asked a group of moderate, slightly left-leaning Americans whether they supported Trump or Clinton.  Under normal circumstances, our sample clearly supported Clinton (see the left half of Figure 1 below).  But there was a catch – some participants were randomly assigned to read a brief statement designed to get them thinking about PC norms prior to telling us who they planned to vote for.  You might think that highlighting norms about positive group communication would help Clinton – the liberal candidate who presumptively represents the affected groups – but you’d be totally wrong.  In fact, making PC norms important uniformly helped Trump – so much so that in our otherwise Clinton-leaning sample, the PC-primed group basically showed no difference in Clinton versus Trump support (see the right half of Figure 1).  Just by bringing communication restrictions to mind in a way that had nothing directly to do with the candidates at all, our sample went from supporting Clinton to the two candidates being in nearly a dead heat. 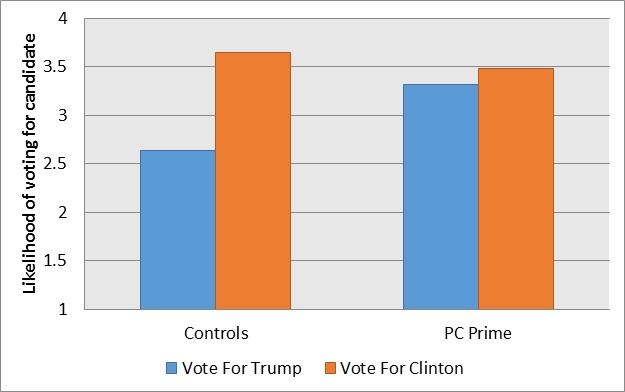 And indeed, often lost in all the chatter about the election is that the American people actually told us that a revolt against restrictive communication (of the kind that characterizes the PC movement) was one of the reasons they were voting for Trump.  Polls from the election cycle showed that people liked his provocative language.  Similarly, feeling voiceless better predicted Trump support than multiple other variables, some of which included age, race, and attitudes towards Muslims, undocumented immigrants, and Hispanics.  Jeff Guo of the Washington Post summarized this feeling by noting: “It’s not just that Trump is willing to be provocative – he’s exciting to many people because he says things they feel they can’t say.”  It is likely for this reason that Trump himself touted his anti-PC credentials directly during the election season, as when he said: “I think the big problem this country has is being politically correct.  I’ve been challenged by so many people and I don’t, frankly, have time for total political correctness”.  So if we want to look for explanations for Trump’s astounding run to the Presidency and continued support, we have to look beyond political ideology. 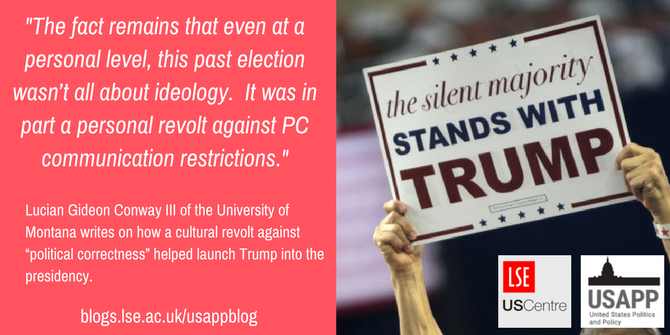 “Donald Trump supporter” by Gage Skidmore is licensed under CC BY SA 2.0

Individual differences are not just about ideology, either

That isn’t to say that individual differences were irrelevant to Trump being elected.  Such differences did matter, but they weren’t just ideological differences.  In addition to showing that priming PC norms altered people’s perceptions of the candidates, our study of the 2016 election also showed that some people were just generally more prone to be unhappy with communication restrictions going into the study.  And that type of person – the person who was especially annoyed with movements like Political Correctness – was also more likely to support Trump.  Importantly, this was true on both sides of the political spectrum: Even when accounting for people’s conservative or liberal ideologies, the effect of concern with communication restriction remained.  We don’t know why people ended up differing in this concern – it could be because of over-exposure to PC norms, their own genetic predisposition, or a combination – but the fact remains that even at a personal level, this past election wasn’t all about ideology.  It was in part a personal revolt against PC communication restrictions.

Lucian Gideon Conway, III – The University of Montana
Lucian Gideon Conway, III is a Professor of Psychology at The University of Montana. His primary research interests revolve around (1) how shared cultural beliefs emerge, persist, and have influence, and (2) the causes of complex (as opposed to simple) thinking and the subsequent consequences on decision-making in political and social arenas.  He is the author of over 60 articles, commentaries, and book chapters in these areas, and his work has been featured in major media outlets such as the Washington Post, USA Today, Huffington Post, Psychology Today, and BBC Radio.  Most recently, he is the author of the book Complex Simplicity: How Psychology Suggests Atheists Are Wrong About Christianity.