President Trump’s use of Twitter to announce policy shifts has become a hallmark of his administration. But what do his Tweets tell us about the outlook for the US relationship with East Asia? Kyi Yeung Goh analysed Trump’s 2017 tweets on this issue, and has found three key topics which may indicate what 2018 may bring: the Trump administration’s preoccupation with North Korea and its nuclear program, trade tensions with China, and the effectiveness of Japanese strategic diplomacy.

Last year was one when following @realDonaldTrump on Twitter became a prerequisite for any serious watchers of American foreign policy. Indeed, his Twitter account has been noted for bringing about policy shifts in Pakistan, the United Kingdom and has even provided basis for his death penalty in North Korea. Richard Haass, President of the Council for Foreign Relations (CFR), has stated that tweets from the President should be given importance equal to that of White House press statements. So what can an analysis of President Donald Trump’s Twitter account reveal about the United States’ approach towards East Asia in 2017 and what does it tell us about the sort of things we can expect in 2018?

In order to answer this question, I created word clouds based on Tweets (retrievable here) sent out by Trump on issues relating to China, Japan, South as well as North Korea. I then proceeded to look at time trends by breaking down the data into three 4-month time periods. From this exercise, there appear to be 3 key trends in 2017 that are worth extrapolating to 2018: (1) the Trump administration’s preoccupation with the North Korean nuclear program, (2) trade tensions with China and (3) the effectiveness of Japanese strategic diplomacy.

The Trump Administration has exhibited remarkable consistency in its policy towards North Korea. In fact, a review of the word cloud quickly reveals denuclearisation of the Kim regime to be the single most important factor driving Trump’s mention of the hermit kingdom. Indeed, the three remaining countries of interest have all been mentioned in relation to North Korea at some point in 2017. From the cloud, we can clearly observe the Administration’s two-pronged policy approach towards the issue of North Korean denuclearisation: first, coordination with the United Nations Security Council (UNSC) to ensure new sanction packages are levied on Pyongyang and second, getting China to do more by reminding it of its obligation to aid in ensuring international peace and security.

It is likely that Trump will continue to focus his attention on the North Korean nuclear issue in 2018 by coupling even more personal attacks on Kim with a focus on highlighting the need for tougher sanction enforcements. It will, however, be interesting to see how Trump copes with North Korea’s shifting divide-and-conquer diplomatic strategy. If early indications are anything to go by, the United States will probably take the shift as a sign that economic sanctions are having a material effect on the Kim regime, meaning that it will continue to press home the need for the creation of new sanctions and active implementation of existing ones. At the same time, it might also bring about an increase in mention of South Korea as the United States ramps up its policy coordination with the Moon government on the North Korean issue.

A re-surfacing of trade tensions with China?

Although China has long been mentioned by Trump primarily in relation to the North’s nuclear program, the issue of trade has clearly been lingering on his mind. This is unsurprising given that he had made resolving what he deemed as unfair trade practices by China one of the key issues of his Presidential election campaign. President Trump, however, toned down his rhetoric during 2017, a point proven when he remarked that he “does not blame China” for its unfair trade practices.

“President Trump’s Trip to Asia” by The White House is Public Domain.

Yet, there are indications that this issue will heat up as we progress deeper into 2018. This, in large part, is due to the looming deadlines relating to American decision on Chinese trade. At the recent World Economic Forum in Davos, Trump signalled that he is ready to take stronger economic measures against China. In his speech, the President made an indirect reference to his displeasure of Chinese trade practices by stating that “[t]he United States [would] no longer turn a blind eye to unfair economic practices”. This builds on frustration expressed by Trump in his Tweet that responded to reports of Chinese oil shipments to North Korea earlier in December 2017. In that episode, the President introduced issue linkage into the picture by suggesting that the severity of trade penalties should be partially conditional on China’s enforcement of UNSC sanctions.

Paralleling this development is that of the growing domestic concern that an ‘America First’ policy will translate into a diminishing American presence in East Asia, leaving space for an ambitious China to grow its influence. In response, Trump has stated that he is open to the United States re-joining the Trans-Pacific Partnership Pact (TPP) if countries “made a much better deal”.  We should therefore prepare ourselves for more Tweets from @realDonaldTrump on the subject of trade in East Asia, particularly with regards to China.

The effects of a blooming US-Japan relationship

The state of US-Japan relations have historically been crucial in determining developments in East Asia. This fact was not lost on Japanese Prime Minister Abe who was the first foreign leader that approached Trump following his electoral victory in November 2016. In this regard, Abe chose to pursue a high risk-high return strategy by courting a relatively mercurial figure like Trump. For Japan, Trump’s surprise win presented a unique opportunity to upgrade the two countries relationship from an “arms-length” to a “shoulder-to-shoulder” one. As such, Abe was quick to build up a personal bonhomie with Trump. This meant gifting a gold-plated golf club to the President-elect in September 2016, golfing at Mar-A-Lago in February 2017 and hosting a golf game in Tokyo during Trump’s Asia Tour in November 2017. This diplomatic effort appears to be paying off. Trump apparently phoned Abe twice before contacting South Korean President Moon Jae-in when North Korea conducted a missile test in September last year. More tellingly, the effect of this closeness has begun to manifest itself in Trump’s foreign policy in various forms such as the adoption of the Indo-Pacific lexicon as a means to balance against a rising China, the American approach towards China on the North Korean issue and more recently, the President’s announcement concerning the possibility of the United States re-joining the TPP. These are all developments whose outcomes will depend on the Trump-Abe relationship. They are also developments that will continue to unfold and ones that we should keep our eyes on in 2018.

Overall, it does seem that the importance of East Asia in Trump’s foreign policy is on the rise. Greater mentions of China, Japan, North Korea and South Korea all support such an interpretation.  This, however, might mean an increased risk of miscalculation from a litany of sources including the North Korean nuclear program, a more confident Japanese foreign policy and a growing frustration with Chinese economic policies. On the other hand, the year might also herald greater stability in East Asia due to US re-engagement. Whatever the case, we can always count on expecting more of the unexpected from @realDonaldTrump in 2018.

Kyi Yeung Goh – LSE International Relations
Kyi Yeung Goh is a final year undergraduate student reading a BSc in International Relations and History. I am particularly interested in international politics, East Asian history as well as foreign policy. I have previously interned at various government Ministries and interned at a political risk consultancy dealing with US-China-ASEAN relations. Currently, I serve as the Deputy Editor of the Features section of the LSE’s student-run newspaper, the Beaver. 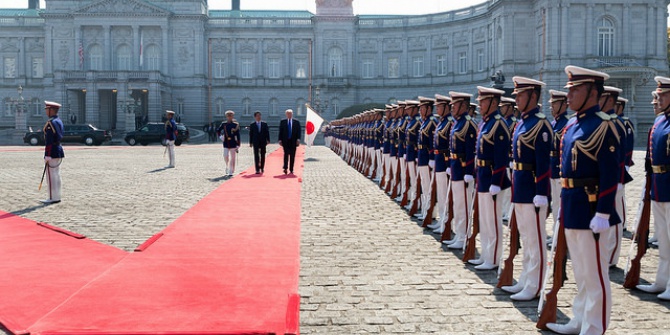