Women and men receive different punishments for their involvement in the same crime: prostitution.

Women and men receive different punishments for their involvement in the same crime: prostitution.

In a new study of nearly 23,000 people who had been arrested only once, and for prostitution, Rebecca Pfeffer finds significant disparities in how men and women had been treated. Men, who tend to be the buyers, were less likely to be arrested compared to women, and were also less likely to be given a jail sentence. The way in which prostitution laws are enforced, she writes, disproportionately harms women and raises questions about the concept of all being equal before the law.

There are gendered disparities in prostitution-related jail sentences.

Every prostitution exchange involves at least two people: a buyer and a seller. Research finds that buyers are almost always male. Sellers can include those with a variety of gender identities, but the majority of sellers are female. Yet, for participation in exactly the same crime: prostitution, men and women are punished differently. Our recent study of nearly 23,000 people who had been arrested only once and for prostitution, in Harris County, Texas, from 1977-2010 found significant gender disparities in the likelihood of receiving punishment and the severity of the punishment imposed.

From the beginning, gender disparities are evident. In our survey 55 percent of women, compared to 45 percent of men, were arrested for prostitution in the first place, showing that there is a disproportionate law enforcement focus on sellers of sex, rather than on those who buy.

The court-imposed punishments for prostitution included fines, probation, and/or jail sentences. Jail was the most frequently imposed sanction, and our study found that women were much more likely to receive a jail sentence: 82 percent of females arrested were given a jail sentence, while only 68 percent of the males were. Males were more likely than females to receive both fines and probation, though the use of probation was relatively rare for both males (25 percent) and females (7 percent). Similarly, 41 percent of men received a sentence including a fine, while only 16 percent of women did.

Consistent with prior research, we find that when it comes to prostitution enforcement, significantly more women are arrested than men. This is problematic because buyers (most often men) appear to outnumber sellers (most often women), yet women are disproportionately arrested. It is common for sellers to engage in multiple prostitution exchanges in one day with a number of different buyers.

It is easily understood that from an enforcement perspective, it is easier to catch a seller since they spend more of their time involved in prostitution. Yet, from a crime prevention standpoint, it is important to consider the role of the seller in these exchanges. Prostitution is a market-based system driven by the forces of supply and demand. Despite laws criminalizing the buying and selling of sex in all fifty US states, research finds that those laws focused on the supply of sex are the most frequently enforced while those criminalizing the demand for sex are the least enforced. Further, research finds that the sporadic enforcement of laws against the buying of sex results in a negligible expected probability of detection for buyers. Put simply, buyers are not deterred by the laws against buying sex since enforcement rarely targets them. This does nothing to disrupt the market for commercial sex. 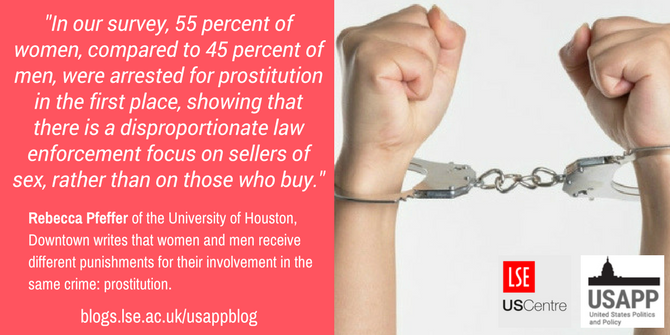 Photo by niu niu on Unsplash

There is an inherent power differential between buyers and sellers of sex. Buyers have the resources to purchase the body and time of sellers. Therefore, the consideration of the enforcement of buyers, who have more power in prostitution exchanges, is powerful when considering how to disrupt these exchanges.

Beyond being more likely to be arrested for prostitution, women are more likely to receive jail terms for prostitution than men. There are important collateral social consequences for those who receive a punishment which includes a jail sentence. These costs may include social stigmatization, disruption of families, displacement of children into the care of other relatives, and loss of legitimate employment.

While men were more likely to receive fines than women, the average fine for men and women was nearly the same: $345.57 for men and $329.50 for women. The implications of receiving such a fine are likely very different for buyers and sellers. Buyers had discretionary income to spend on purchasing sex in the first place, while sellers were likely involved in prostitution because of financial imperative. The imposition of a fine in this amount is likely more harmful to a seller than to a buyer and may even lead a seller to sell again (despite the risk of re-arrest) in order to pay the fine.

Beyond the specific gendered ramifications of these differential punishments, there are considerable general social implications to consider. We found that men receive slightly larger fines and longer probation terms than women, but women receive longer jail sentences than men. This demonstrates that there is a systematic, gendered inequality in the justice system for involvement in exactly the same criminal offense, which goes against the spirit of everyone being equal before the law.

For sellers arrested for prostitution, for which a traditional law enforcement response for a misdemeanor-level offense may be ineffective at best or socially debilitating at worst, alternative sanctions may be needed. Diversion programs that address the root cause of involvement in prostitution for sellers of sex may be more appropriate than the traditional punitive criminal justice response.

Finally, it seems prudent to conduct research on whether there are any correlations between specific types of punishment for prostitution and recidivism for both buyers and sellers.

Rebecca Pfeffer – University of Houston – Downtown
Dr. Pfeffer is an assistant professor of criminal justice at the University of Houston – Downtown. Her research focuses generally on the victimization of vulnerable populations, including victims with special needs and victims of human trafficking and hate crimes. Her current research focuses on public policies addressing prostitution, both in terms of the buying and selling of sex, and specifically investigates effective law enforcement response to the problem of prostitution.