Mergers have become an increasing frequent part of the American media landscape, and alongside this consolidation interest groups have sprung up to challenge them on the grounds of minority representation, In new work, Jason A. Smith and Randy Abreu take a close look at the effects on Latina/o representation of the 2011 merger between Comcast and NBC Universal. They write that while the memorandum of understandings signed by Comcast and Latina/o  organizations promised increased minority representation, this has not come to pass in the intervening years. Such voluntary agreements, they write, have no teeth and need to be superseded by greater federal oversight.

In early March, ahead of the 2018 Oscars, the National Hispanic Media Coalition staged a protest citing the lack of Latina/o representation among the nominees and the media landscape more broadly. The cultural struggles of media exclusion are well-worn, but a central part of these struggles is the role of media policy.

In 2011, a merger between Comcast and NBC Universal was approved by the Federal Communications Commission (FCC) on multiple conditions that upheld consumers’ rights. For Latina/os, these conditions meant the company would provide opportunities for communities of color and establish minority channels.

As media consolidation in the United States has become more common, so too have social movement groups that work to challenge these mergers. In the United States, the FCC is the governmental agency where most of the initial merger-related battles take place; Latina/os have been engaged in these battles for the last thirty years. As part of their struggles, they have had to adapt and work within policy spaces to advance the concerns of Latina/os over media representation and participation.

In recent work, we reflect on the time period in which Comcast sought approval of the merger, and demonstrate how the process left Latina/o communities with nothing more than broken promises. As the conditions of Comcast’s merger are set to expire this September, Senator Richard Blumenthal (D-CT) sent a letter to the Department of Justice’s Antitrust Division at the end of 2017 urging the agency to investigate the anti-consumer behavior of Comcast since its merger. If these conditions are set to potentially undergo further scrutiny, critical attention should be placed on memorandum of understandings (MOUs) and the role of racialization in the policy-making process.

When the Comcast/NBCU merger was approved by the FCC, promises were made to ensure that the merger would meet the agency’s public interest standard related to diversity in the media landscape. In a MOU with Latina/o organizations, Comcast promised to focus on increased visibility of Latina/o s in multiple areas such as corporate governance, workforce, procurement of third-party services, programming, and philanthropy. As approval of the merger was being sought at the FCC, these focus areas were consistently used by Comcast to make their case to the regulator. Certain Latina/o organizations even cited the MOU in their meetings with FCC officials, urging the agency to approve the merger. 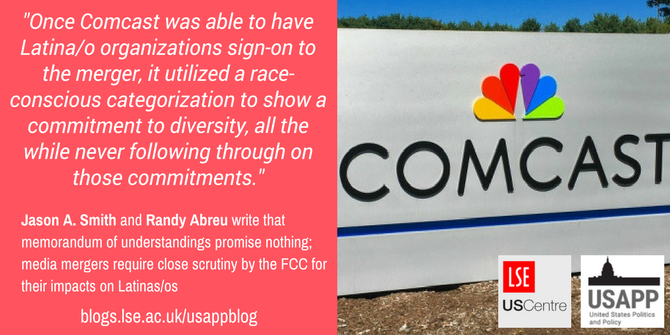 “Comcast” by Mike Mozart is licensed under CC BY  2.0

As MOUs are voluntary formal agreements between two or more parties, they do not hold any enforceable legislative power. “Voluntary” then, becomes the key measure of the agreements made between Comcast and Latina/o organizations. When the FCC approved the merger, some of the commissioners praised the voluntary commitments that were reached, however the agency did not adapt the language or essence of the MOU into its formal conditions. By failing to include the agreements set forth in the MOU as enforceable standards to meet scrutiny, the FCC fundamentally set up a scenario in which Comcast had no obligation to support diversifying the media landscape.

Briefly stated, racialization refers to a political process in which interest groups struggle for policy outcomes framed through racial categories. The MOU served as a conduit for racialization, as the overt labeling of and requests by Latina/os played a role in the FCC’s approval of the merger. For Comcast, the MOU reflected the economic interests of the company, utilizing the categorical label of “Latina/o” to demonstrate its focus on diversity. The company’s two Latina/o -channels were additionally framed as part of their media portfolios, leveraging content from their other holdings to be sold to Latina/o audiences – largely reflecting a recycling of content rather than producing new, Latina/o -led content.

Latina/o organizations were also constrained by the language and subject of the MOU. As it was framed under the economic interests of Comcast, Latina/o leaders adopted some of the same interests that benefited Comcast in the long-run. This power imbalance over the MOU being set on Comcast’s terms reflects how structural inequalities regarding race are perpetuated, in which communities of color are left with the short-end of the stick. Once Comcast was able to have Latina/o organizations sign-on to the merger, it utilized a race-conscious categorization to show a commitment to diversity, all the while never following through on those commitments.

In a 2016 report assessing the aftermath of the merger, the Center for the Study of Ethnicity and Race at Columbia University found that Comcast failed to incorporate Latina/os behind the camera, stereotyped portrayals increased in its film and television productions, and Latina/o leaders within the company were segregated and paid less.

Media representation and participation are increasingly becoming hot-button topics that demonstrate how policy is tied to our everyday culture. Policy scholars and practitioners in this field should critically take up the concept of racialization toward future debates regarding ownership – particularly when media mergers are on the table (as the AT&T/Time Warner merger currently is) and MOUs are used as tools to push legislative approval. If Comcast undergoes federal scrutiny when its conditions expire, then lawmakers should employ these perspectives when deciding what is valuable for its citizens.

Randy Abreu
Randy Abreu is an attorney and politician from The Bronx, New York. He is a clean energy and technology advocate who recently served in the Administration of President Barack Obama. He tweets @AbreuForNYC.