There is overwhelming evidence that the benefits of vaccinations outweigh their risks. But why do so many continue to be skeptical of their use? In new research, Mark Joslyn and Steven Sylvester find that education is an important predictor of trust in vaccine science, and that Democrats are more influenced by this effect than Republicans. They write that these differences may be down to Republicans’ tendency to distrust government and science.

The infant and childhood immunizations program is one of the most effective health interventions of the 20th century, and frequently cited as a significant factor for increases in life expectancy . Yet despite overwhelming scientific evidence showing the benefits of vaccines far outweigh the risks, and vaccines do not cause autism, skepticism persists. For example, in the 2016 American National Elections Study 12 percent of respondents felt the risks of vaccinations outweighed the benefits and 17 percent believed the risk and benefits were equal.

Our research finds that education is a key predictor of whether someone possess an accurate understanding of vaccine science.  The higher the level of education people attain the more likely they are to believe vaccines do not cause autism.  Studies show education strengthens people’s capacity to consider multiple sources of information, seek out and retain factual information and dispute questionable information.

According to a 2015 Gallup News Survey we analyzed in our study, nearly 64 percent of people with a bachelor’s or graduate degree reported accurate beliefs about vaccines and autism.  That figure dropped to 35 percent among those with only a high school degree or who did not graduate from high school.  We identified accurate beliefs from the survey question, “From what you have read or heard, do you personally think certain vaccines do – or do not – cause autism in children, or are you unsure?”   Responses “no – vaccines do not cause autism” were categorized as accurate.

The connection between vaccine science and party identification is less certain.  Prominent members of both Democrat and Republican parties are vaccine skeptics.  In addition, Democrat states granted the most exemptions from vaccinating kindergarteners yet Republicans are considerably less trustful of scientific recommendations.  In a 2016 survey, only 22 percent of Republicans replied, “definitely not true” to the statement, “vaccines have been shown to cause autism.” Thirty nine percent of Democrats responded “definitely not true”.

In the Gallup survey, 54 percent of Democrats and 50 percent of Republicans reported accurate beliefs.  While differences are minor, it appeared Democrats held a slight advantage in knowledge about vaccine science. 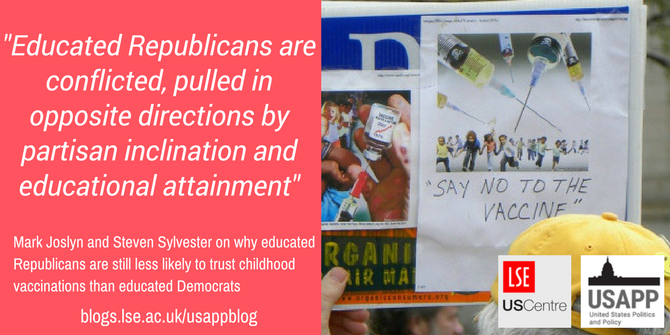 “Anti-vaccination conspiracy theorist at a Tea Party Express rally” by Fibonacci Blue is licensed under CC BY 2.0

More intriguing, party identification changed the relationship between someone’s level of education and his or her likelihood of possessing accurate beliefs.

Figure 1 – Beliefs about vaccinations by party and education 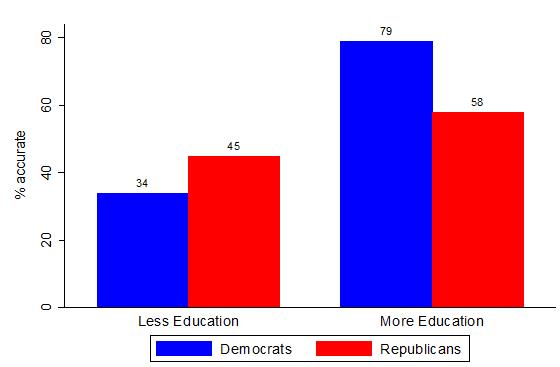 We were able to replicate these results in another national survey (CBS news) that included a similar question about vaccines and autism.  In addition, the associations between party, education, and accuracy appeared robust in advanced multivariate models.

Why are Democrats affected by education more than Republicans?

Let’s be clear, education increased accuracy about vaccines.   But, Democrats seemed to be more influenced by education than Republicans.   Why?  We theorized the answer concerns the nature of scientific evidence.  Vaccine science is consistent with Democrats’ support for science and government programs generally.  The inclination of Democrats to agree with vaccine science thus combines with education to produce accurate responses.

There is significant evidence that factual knowledge can influence a variety of policy preferences.  There is also accumulating studies that demonstrate the influence of political misinformation on people’ policy attitudes.  Our results from the CBS survey showed that accuracy about vaccines increased support for a requirement that parents vaccinate their children.  Accuracy also led to greater endorsement of policies that prohibit unvaccinated children from attending public schools.  As Figure 2 shows, support for both policies was about 20 percent higher among accurate respondents. 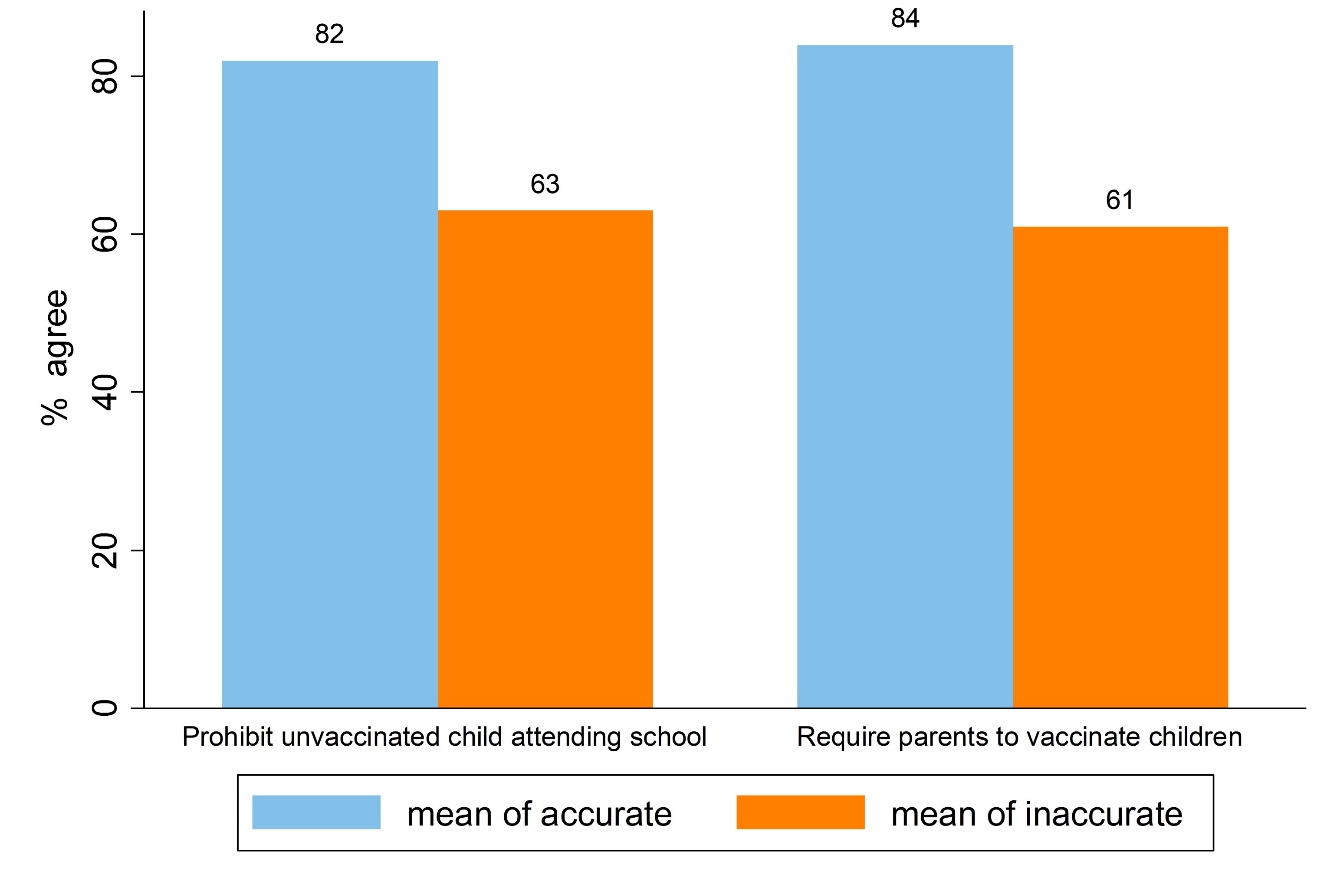 Recent outbreaks of measles in California and Minnesota are potent reminders of what the absence of accurate beliefs about vaccine science can do to communities and individuals.  Our results demonstrate that education improves accuracy, but in combination with partisanship that improvement is not equal.

An important implication for policy makers concerns the timing of public education campaigns.   More education may not be the answer.  Rather, targeting of pro-vaccine messages is likely more effective long before skepticism creeps in and partisanship develops.  The motivations of party members to process vaccine information in an identity-protective fashion must to be preempted.  This may be very difficult.  But once science is politicized, education may only reinforce partisan motivations.