Across the political spectrum in the United States, there are growing concerns regarding the effectiveness and utility of solitary confinement – a practice also referred to as restrictive housing. However, for a country that has grown reliant on the use of solitary confinement in its prisons, there are still more questions than answers about how to reduce its use while also ensuring institutional safety and security. Ryan M. Labrecque created a new tool for use by corrections staff to triage inmates by risk. He argues that this tool can be effective in reducing the use of restrictive housing and increasing prison safety by proactively targeting high-risk inmates for treatment services upon their entry into the prison system.

Restrictive housing—what some also refer to as solitary confinement or administrative segregation—involves the isolation of an inmate in a single-cell for the majority of the day with little access to services and interactions with other people. Correctional authorities often defend the use of this practice as necessary for ensuring safety and security within the prison system. Current estimates indicate that one in five prisoners in the United States has spent time in a restrictive housing setting during the previous year. The reliance on the practice at this level is perplexing: a review of the empirical literature shows that restrictive housing yields no meaningful improvements in inmate behavior or institutional safety. Furthermore, its use also raises serious ethical and legal concerns, with critics who argue that the practice causes serious psychological damage and represents a cruel and unusual form of punishment.

Most correctional scholars and policymakers agree that restrictive housing should be used less. Recently, several jurisdictions in the United States took steps to limit the amount of time that inmates spend in restrictive housing (e.g., placing time caps on segregation stays), and further to restrict who can be placed in these settings (e.g., adding exclusion provisions for juveniles and mentally ill). Although many view these initiatives as markers of success, much more can and should be done in reforming this correctional policy. There is a large body of offender rehabilitation literature that outlines specific principles for improving offender behavior. In general, this work suggests that correctional agencies achieve the best results by providing high-risk offenders with treatment interventions that target factors related to their criminal behavior (e.g., antisocial personality, cognitions, associates). It stands, therefore, that one way to improve safety in prison is to reform restrictive housing policies, and inmate management practices more generally, to adhere to these principles of effective intervention.

Most treatment services that inmates receive tend to occur about a year or two prior to one’s release date. These programs seek to help inmates transition from prison into the community, and research shows these interventions can lead to lower levels of unemployment and reoffending after release. Although encouraging, by focusing efforts on improving outcomes in the community, corrections officials seemingly miss the opportunity to influence inmate behavior while in custody. If the goal is to reduce the use of restrictive housing, correctional authorities should also incorporate earlier interventions that can improve inmate behavior in prison, and may reduce the need for such housing in the first place. Although one could argue that all inmates should participate in this type of programming, the reality is that the large number of ongoing prison admissions—coupled with the limited treatment resources often available—makes this strategy unlikely for the time being. The success of this preventative approach, therefore, hinges on the correctional agency’s ability to triage interventions toward the inmates at greatest risk for restrictive housing placement. This strategy requires that there is a risk assessment available that can predict which inmates are more likely to be sent to restrictive housing. 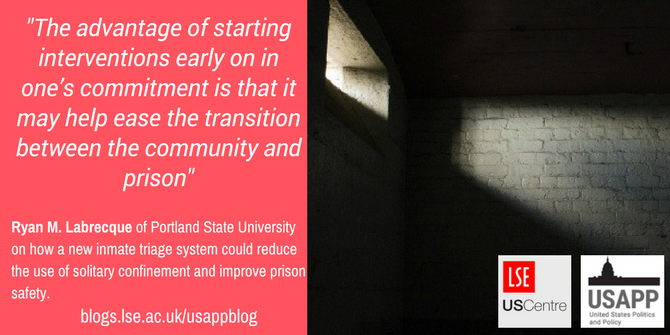 Paula Smith and I recently created one such tool in a large Midwestern state—the inmate Risk Assessment for Segregation Placement (RASP)—to take on this task. The RASP is designed to be easy to use and quick to administer; it is also non-proprietary and publically available. The RASP includes six items from information commonly collected by correctional staff during the initial prison admission process, with possible risk scores that range from 0 (lower risk) to 12 (higher risk). The RASP further categorizes inmates into one of three groups: low-, moderate-, and high-risk for placement in restrictive housing. Our evaluation found that 84 percent of the high-risk group was sent to restrictive housing during the observation period, which is much higher than the 60 percent of the moderate-risk group and 25 percent of the low-risk group. Furthermore, 90 percent of the high-risk group was also written up for violating the institutional rules during this period, which is significantly higher than the 60 percent of the moderate-risk group and the 23 percent of the low-risk group. Our study supports the use of the RASP as a valid predictor of placement in restrictive housing and engagement in institutional misconduct. More importantly, however, the high-risk inmates in our investigation represent less than 10 percent of all new admissions, which make it a very realistic possibility to provide this group with a short-term treatment intervention at the front-end of their prison stay.

The policy implications of our work are significant. Corrections officials could administer the RASP during the admission process to identify high-risk inmates. Authorities could then proactively target this group with early rehabilitative services. This front-end approach is not meant to be the sole source of treatment in prison. High-risk offenders have many needs and require much more treatment than any short-term intake program could possibly provide. The advantage of starting interventions early on in one’s commitment is that it may help ease the transition between the community and prison. It may also help provide the link between high-risk inmates and other important services in prison, such as education, employment, mental health counseling, and other treatment programs. The use of this strategy holds great promise for improving safety in prisons and reducing the need for restrictive housing. Currently, two state departments of corrections are implementing the RASP and a larger scale evaluation of the tool is forthcoming.

Ryan M. Labrecque — Portland State University
Ryan M. Labrecque is an Assistant Professor in the Department of Criminology and Criminal Justice at Portland State University. His research interests focus on offender classification and assessment, correctional rehabilitation, restrictive housing, program implementation and evaluation, and the transfer of knowledge to practitioners and policymakers.