Former mayors are not unknown in Congress and in governors’ mansions – but does running a big city act as a springboard for higher office? To answer this question, Katherine Levine Einstein, David M. Glick, Maxwell Palmer and Robert J. Pressel collected data from nearly 200 large US cities and interviewed 94 mayors. They find that mayors are not likely to seek higher office, and tend to have little interest in doing so – especially if they are women or black.

Does serving as the mayor of a big city provide a springboard to higher elected office? Several current politicians, including Senators Bernie Sanders, Cory Booker, Bob Corker, and Tim Kaine, served as mayors before seeking higher office, as did Governors Bill Haslam of Tennessee and John Hickenlooper of Colorado. Other mayors have attempted to use their position to seek higher office. Rudy Giuliani ran for President in 2008 after serving as Mayor of New York City; Los Angeles Mayor Eric Garcetti and New Orleans Mayor Mitch Landrieu are seen as potential presidential candidates in 2020. Given the prominence of mayors within their cities and regions, we might expect many big-city mayors to run for higher office. However, we find that relatively few do so.

Political scientists have long studied progressive ambition—the sequence of seeking election to increasingly powerful offices—among state legislators. This work has primarily focused on the choice to run for Congress, as well as on members of Congress pursuing Senate seats.  We expand on this existing research with two different approaches to studying mayoral ambition. We examine the extent to which mayors exhibit progressive ambition, and how distinctive personal and local characteristics affect their career decisions.

First, we collected historical data on the mayors of 196 cities across the country. This set of cities comprises all state capitals, all cities with populations greater than 150,000, and, where not already included, the most populous city in each state. For each city, we gathered data on all those who served as mayor between 1992 and 2015. We gathered personal characteristics and complete electoral histories, as well as city-level demographic and institutional factors.

Second, we asked 94 US mayors from cities with more than 75,000 people questions about progressive ambition as part of a larger and representative survey of mayors.  We asked these mayors about their interest in other political positions, as well as work outside of government. We also asked whether they had been seriously recruited to run for higher office. 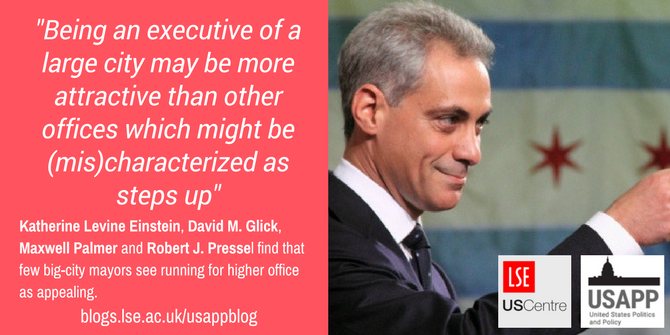 “Rahm Emanuel, Pointing, With Chicago Flag in Background” by Daniel X. O’Neil is licensed under CC BY 2.0

On balance, we find that mayors are unlikely to seek higher office, and that most do not even express interest in doing so.  Of the 695 mayors in our historical study, only 90 later ran for higher office (some multiple times), and only five percent of the total sample were ever elected to those offices. For comparison, previous studies have estimated that about forty percent of state legislators run for, or express interest in, higher office.  Within this subset of mayors, there is significant variation of the specific offices sought.  The most commonly sought office is governor, followed by the US House and then other statewide offices, such as lieutenant governor.

We find that mayors are more likely to run in cities with “strong mayor” systems where they serve as a more traditional executive, compared to mayors in “council manager” systems, who serve as the head of the city council and delegate power to a city manager. We also find small differences in the likelihood of running based on race. Generally, black mayors are about nine percentage points less likely than their white counterparts to run. Mayors from cities with higher black populations are somewhat less likely to seek higher office, while those with higher Hispanic populations are somewhat more likely.

Within our survey, most mayors are similarly ambivalent about their post-city hall political careers.  We asked mayors to rate a series of positions on a 5-point scale ranging from very unappealing to very appealing. Most mayors rate further government service as not particularly appealing, with variance based on the prestige of a position.  As Figure 1 illustrates, by a large margin, the mayors in our sample appear most enthusiastic about non-governmental work. 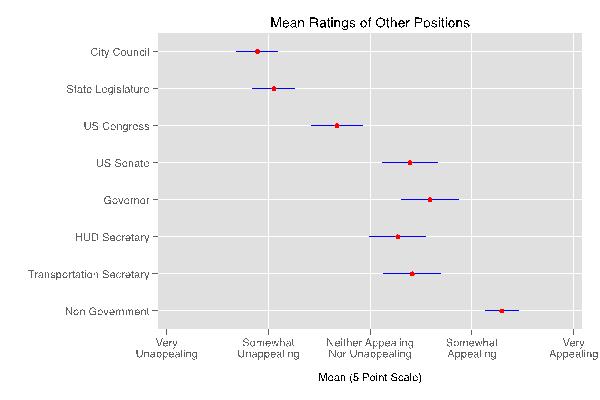 We also find interesting differences in progressive ambition across the mayors in our survey based on sex.  As Figure 2 shows, female mayors are twenty to thirty percentage points less likely to view a higher office as appealing than male mayors.  Interestingly, we find little gender differentiation in recruiting—male and female mayors are equally likely to report being recruited to run.  Institutional factors, such as city size or mayoral powers, have little effect. 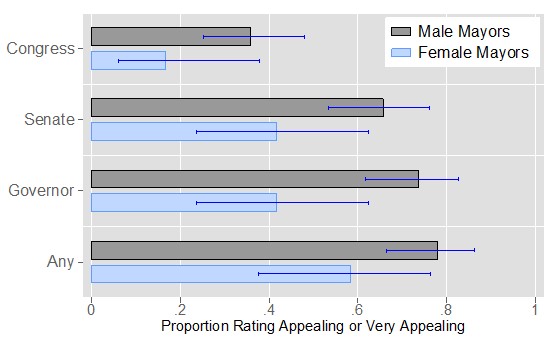 Why are mayors so much less likely to display an ambition for higher office than their counterparts in the state legislature?  Qualitative evidence from our survey may provide an explanation.  Several mayors cited distaste for legislative work, highlighting a comparative lack of efficacy, congressional dysfunction and partisanship, and frequent elections and fundraising.  After serving as a big-city executive, many mayors may not be interested in starting at the bottom of a hierarchical institution as a freshman legislator.

Additionally, serving as a big-city mayor may be a more appealing job than many other elected offices. Mayors Rahm Emanuel of Chicago and Tom Barrett of Milwaukee are both ambitious politicians who, after serving in the US House of Representatives, opted to become mayors. Being an executive of a large city may be more attractive than other offices which might be (mis)characterized as steps up. As the mayor of a western city told us, cities “are where you actually get work done.” Until views of state and federal government become more positive, many mayors who could be high-quality candidates will eschew higher office.

Robert J. Pressel – Massachusetts Institute of Technology
Robert J. Pressel is a senior research support associate at the Massachusetts Institute of Technology. He received his dual BA/MA in Political Science from Boston University in 2016. His research interests include political parties and primaries, elite behavior, and state and local politics.