For decades, rural communities in the US have sought to attract industrial development via tax and zoning incentives and other subsidies. But what happens in the decades which follow after a large company establishes itself? Sudeshna Ghosh and Carla Chifos tracked the effects of Toyota’s manufacturing plant on rural counties in Kentucky over three decades. They find that most Toyota-related development occurred in urban rather than rural areas. Rural counties, they write, need to prepare for the positive and negative effects of attracting new large-scale industries.

Since the mid-20th century, small towns and rural communities have increasingly become attractive for the location, relocation, and/or expansion of large-scale manufacturing facilities. With the availability of inexpensive land and lenient zoning and development regulations, such communities offer lucrative locations for large-scale industries employing thousands of workers. Rural communities seek short-term economic benefits, such as more jobs and an enlarged tax base, which can transform their declining or stagnant agricultural base. As a result, economic development policies which aim to attract large-scale industries to rural communities that include incentives in the form of land, tax breaks, and job training, have gained popularity in the US.

While the economic growth impacts of such industrial locations have been widely studied, their associated social and environmental impacts in the longer term are rarely investigated despite their implications for the sustainability of rural small towns. In many cases, such communities are not prepared to address the physical transformations that result from the spontaneous growth of housing, infrastructure, amenities, and other services needed to meet the direct and indirect demands of a large-scale industrial facility. But if growth and change can be planned for, land use (LU) transformations can be carried out in a long-term sustainable manner, reducing environmental issues and social inequities, and increasing long term economic benefits.

The trend of incentive-driven large-scale industrial siting in rural communities can be traced back to the 1930s. However, as Figure 1 shows, a renewed burst began in the 1980s and has continued, with many automobile manufacturing industries relocating in the small towns of the Mid-Western and Southern states. These locations became particularly popular for foreign automobile manufacturers, such as Japanese, Korean and German, expanding their production base in the US to capture the North American auto-market. 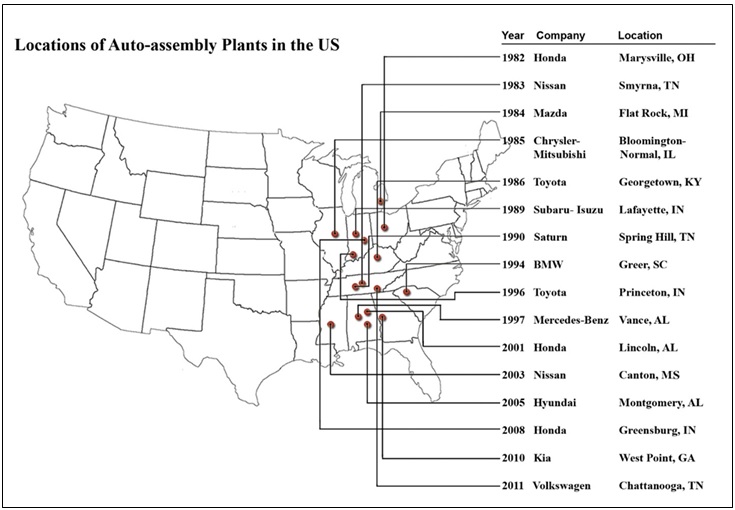 Each company has its own culture for how its facilities will interact with its surrounding landscapes and communities. Japanese auto-industries, which achieve higher manufacturing efficiency with their technological and team-work based management innovations also emphasize on life-long job security and quality-of-life for their employees, resulting in more corporate investment in local communities to build amenities, infrastructure and services. This was one reason we chose a Toyota plant in Georgetown, Kentucky (Figure 2) to see how LU changes occurred in the region over a period of 25 years. 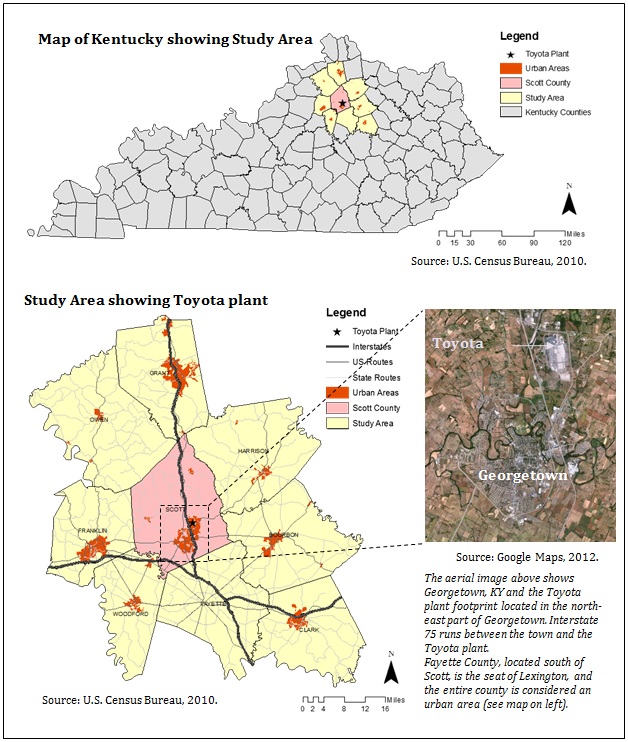 How Georgetown, Kentucky and the surrounding region were influenced by the Toyota Plant

Georgetown is located within rural Scott County, Kentucky, and is in the middle of a region which traditionally depended on thoroughbred horse-farms, tobacco and other agricultural activities. The region has witnessed massive transformation since the siting of the Toyota Motor Manufacturing plant there in the early 1980s. With a $147 million State incentive package and an additional $800 million investment, the facility began operation in 1988 employing 3,000 workers and producing 200,000 vehicles per year. Over the following three decades, Toyota’s operations catalyzed significant growth around Georgetown; the town grew from a population of 10,972 in 1980 (pre-Toyota) to 33,440 in 2016, and takes pride in being the home to the Toyota plant that employs more than 7,000 workers from a broader Central Kentucky region and now produces about half a million vehicles annually.

Our objective was to assess the regional LU changes that can be attributed to the presence of the Toyota plant in Georgetown. We extracted the actual LU configurations before Toyota in 1982 and 1985, and developed models to simulate the likely trajectory of the LU change for 1989, 1992, 1998 and 2006 assuming a scenario without Toyota. We then compared this scenario with actual LU configurations after Toyota set up its factory in 1985. In both scenarios, we measured change among the following land use types: large-scale industrial, commercial and office areas (LICO), high density residential areas with some mixed uses (HDR), single family residential areas (SFR), water bodies, rural lands (RL), and roads (RD). 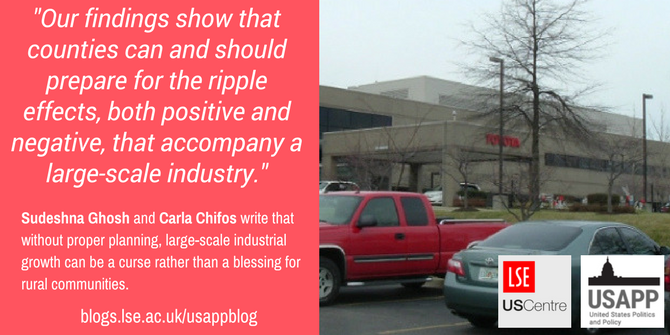 Credit: Censusdata at the English Wikipedia [GFDL or CC-BY-SA-3.0], via Wikimedia Commons

Land use changes in rural areas that are along major interstate highways and are near to urban areas have occurred all over the US since 1980 for many reasons, including urban sprawl, a renewed interested in living in small towns, shopping and tourism hubs at interstate interchanges, and shifts away from agricultural livelihoods.  And certainly, any and all of these may have contributed to the LU changes of Scott and its contiguous counties.  However, we found evidence that allows us to explain what could have been caused by the Toyota plant.

Amount of LU change: Our models suggested a few interesting trends in LU change that can be attributed to Toyota. The large-scale industrial, commercial and office areas category (LICO), which is mostly employment generating areas, witnessed a modest increase of nearly 8,500 acres, but most importantly the majority of this change happened within the first ten years. Our residential categories witnessed significant growth of nearly 38,000 acres; however, the majority of this happened after 1998. About 47,700 acres of rural lands were lost to urban uses in the process, implying small changes among urban uses converting to denser urban uses.

Time-lag in types of LU changes: A majority of new LICO developments, specifically industrial developments, occurred right before and shortly after the Toyota plant was established, while new large-scale retail and commercial developments continued to grow modestly over time. As Figure 3 shows, the residential LU, HDR and SFR categories, grew modestly in the short-run and only witnessed exponential growth after about 13 years. This was more significant for single-family residential and sub-division developments. This implies that the housing market took off once real estate developers and residents were confident about the stability and longevity of local economic growth. 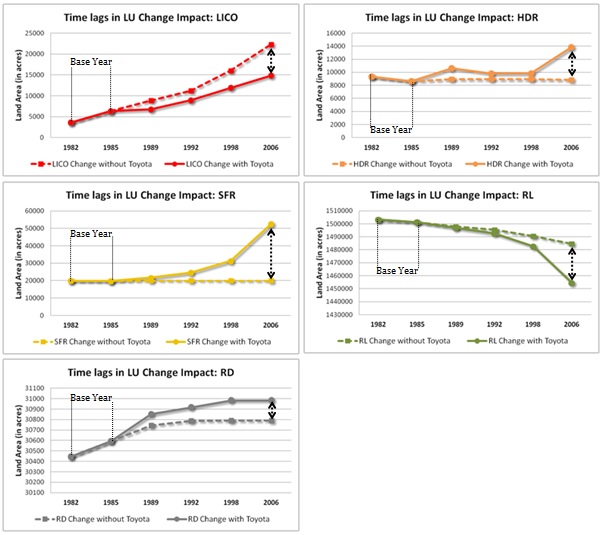 Location of LU change (Figure 4): In terms of the location of land use change, our comparison of predicted and actual models suggests that new LICO, HDR and SFR developments would have concentrated towards the Lexington-Fayette urban area, located within 20 miles of Georgetown, if Toyota had not located in Georgetown. As a result of Toyota, Georgetown witnessed significant urbanization of rural lands along with the fast-growing Lexington-Fayette urban area. However, the other nearby small towns and rural areas still continue to grow very slowly. 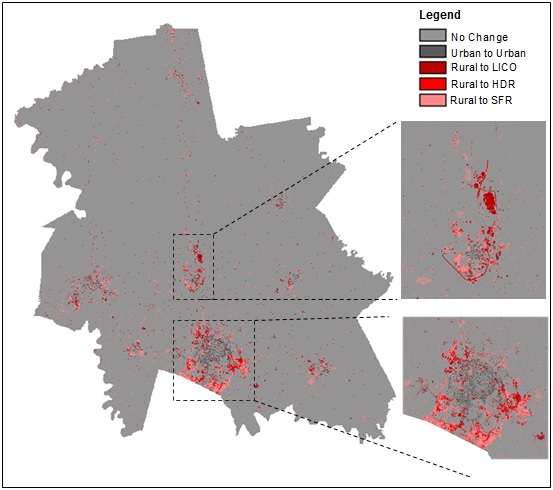 The stories of large-scale industries siting in rural communities haunt many planners; often, local economies are devastated when these employers leave, meaning the loss of major employment and tax bases. What remains are left with abandoned buildings, unusable land, and a failure of local retail and housing. Our findings show that counties can and should prepare for the ripple effects, both positive and negative, that accompany a large-scale industry. Counties that can be prepared for the coming growth can have a means to direct it to where it will be more beneficial, and can harness it to meet other objectives beyond simply the attraction and retention of the industry.

Local development policies: Most economic development policies are geared to attract investments, often at a large cost to the host community. However, our research indicates that the growth that occurs due to these types of investments, often will gravitate toward the more urban or developed areas, often leaving the host community bearing the burden of a manufacturing facility (including traffic, environmental impacts, and increased demand for housing, services, and infrastructure) and not really reaping the benefits of induced growth (higher residential and commercial tax base, higher quality-of-life, or overall higher incomes). State and local economic development policies could be designed to also add incentives to attract the induced growth nearer to the host community.  In other words, not just focus on catching the big fish, but using the big fish as the bait to attract both supporting and new small-scale economic activities in the community.

Local and regional planning: While the local planning for the locations of expected growth of housing, services for this new population, retail and commercial to support the growing population and increases in incomes, and the supporting economic and service activities for the industry is logical, it is not always done. And often local planning isn’t enough, as the impacts are regional and require regional cooperation.  Counties would benefit from putting resources into long-term comprehensive planning, and even consider land banking before the investment arrives to give the county more control over enforcing its LU vision. Even though our study shows a lag in the residential, retail, and support activities materializing, planning for these at the same time as planning for the location of the new industry will help prevent speculation and development “of convenience” instead of reason.

Environmental Sustainability: Manufacturing activities, increased commuting traffic, increased transportation of goods in and out of the facility, and expansion of land guzzling sub-divisions all, if not well planned, can cause loss of productive farmland, interference in water systems, and other ecological disruptions.  Rural counties have more ecologically intact tracts of land as well as more land available for development.  If this land is inventoried and rated for its ecological and agricultural productivity and a large-scale green-oriented land use plan is created, which highlights land suitability for nature, agriculture, and both low and high density development, a pattern for a more sustainable region can be created.  The idea is not to stop or slow growth, but to direct it to the locations and landscapes that are best for each type of use.