By giving greater relief to the highest earners, the charitable deduction disadvantages charities which protect the most vulnerable

By giving greater relief to the highest earners, the charitable deduction disadvantages charities which protect the most vulnerable

As part of its $1.5 trillion tax cut last year Congress doubled the standard deduction that taxpayers are eligible to take. Many US charities are worried that this will decrease their incomes by reducing the number of people who itemize their deductions. Kelly L. Russell writes that charities are right to be worried about this change, but also argues that this concern masks the darker side of the charitable deduction: it tends to benefit the richest taxpayers the most, who in turn tend to support elite institutions such as foundations and universities, rather than charities which support the poor.

By the end of this month, the Internal Revenue Service will have received about 140 million individual tax returns. Many of those who have filed this year will have hoped to see greater tax relief than they have years past. The tax legislation passed by Congress in December 2017 promised to lower the tax burden for a large swath of American households. One way it does this is by doubling the standard deduction—the baseline deduction in taxable income every taxpayer is eligible to take. Taxpayers are celebrating the change, but charitable organizations are decidedly less enthusiastic about it.

This means we might see a dip in charitable giving. Charities have not hesitated to register their displeasure about this. As the tax legislation began to take form last fall, charities began to express their concerns that a diminished itemizer class would strip them of their ability to meet basic needs. In a statement to New York Times columnist Ann Carns, Feeding America executive Diana Aviv explained how a potential decline in charitable giving would “devastate [their] ability to provide food assistance;” Orvin Kimbrough of the United Way of Greater St. Louis voiced his concerns in similarly stark terms: “This is about people’s lives.” 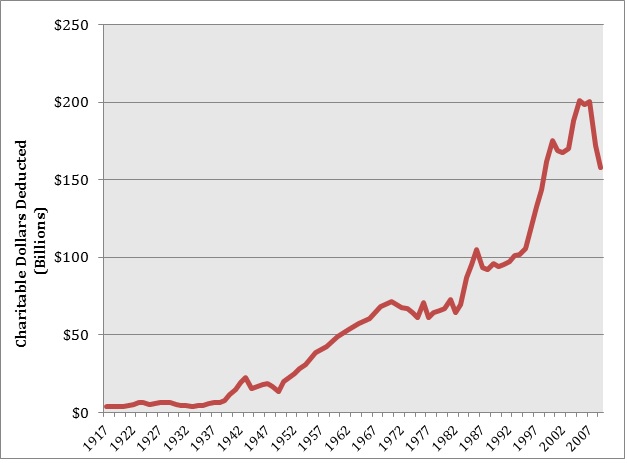 On the face of it, charities’ support of a tax deduction that incentivizes charitable giving makes perfect sense. But charities’ ardent defenses of the policy have masked its distributive effects—and particularly the outsized benefits it bestows on elites and elite organizations. In fact, elite taxpayers reap the greatest subsidies from the charitable deduction without having to raise their voice in defense of the policy at all.

The charitable deduction was originally created to incentivize elite giving during World War I, when the federal income tax applied only to elites and tax rates had spiked from less than 10 percent to over 70 percent to fund the war. Over time, the structure of the deduction has remained the same, but marginal income tax rates have plummeted and the size and scope of the charitable sector has expanded considerably. By the late twentieth century, peak marginal income tax rates had begun to fall—from over 90 percent in the 1950s to 70 percent in the ‘70s to an all-time low of 28 percent in the Reagan era. Meanwhile, charitable organizations had emerged as a core component of the nation’s welfare apparatus. As the charitable sector has become larger and more legitimate, charities’ mobilization in defense of the deduction has only increased. And because charities are the deduction’s main constituency, they’ve played a major role in shaping the narrative around the policy.

Their narrative rests on the claim that the charitable deduction is a broad social benefit central to the provision of fundamental societal needs. Over the years, charitable organizations have drawn upon different frames to illustrate the importance of the policy, but they have never wavered in their defense of it as a cornerstone social protection. During World War II, charitable organizations promoted the charitable deduction as a reward for those who supported cherished social institutions—especially churches, colleges, and universities, which many saw as central to the American way of life. By the latter half of the twentieth century, and especially during 1980s era of rising anti-state sentiment, charities had come to cast their work as a necessary counterbalance to the public sector, and the charitable deduction came to be seen as an engine for the (much-desired) private provision of public goods. And today, as nonprofit social service provision has become more accepted and visible, charitable organizations have come to describe the deduction as a sanction for their efforts to meet public needs that the government has failed to or chosen not to address. Through it all, they have heralded the deduction as way of helping protect the poor. 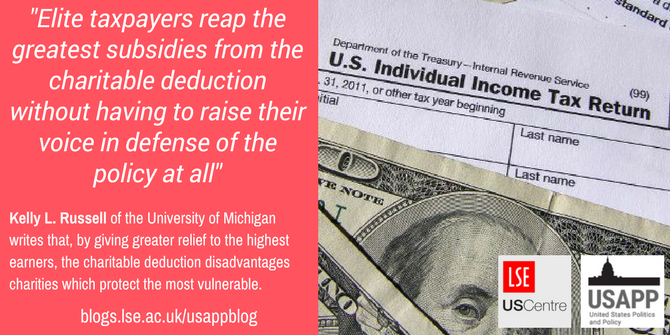 “Personal Income Taxes Ver3” by Chris Potter/ccPixs.com is licensed under CC BY 2.0

The new tax law, and especially the doubling of the standard deduction, may indeed decrease charitable giving as fewer taxpayers itemize than in years past, but it probably won’t do much to change the dynamics described here. Elites will continue to enjoy outsized benefits from the policy and will continue to bestow these benefits on the organizations they care about, the majority of which do comparatively little to support the poor. Meanwhile, charities’ efforts to protect the deduction have insulated it from reform—or even critique.