The media industry is unique in its ability to spread information that may influence the democratic process. There is ample evidence that news coverage influences voting and policy-making, and this issue has become even more prominent after the controversy over the role of ‘fake news’ in the 2016 US presidential election.

A powerful defence against fake news is real news. Voters are less likely to be affected by false and skewed reports if they receive unbiased political information from a diverse set of reliable sources. But how many of us actually do? Do some of us access a lot of high-quality news while others are information-poor?

It is crucial to distinguish between media production and consumption. In Western democracies, the truth is out there. A number of sources produce high-quality political information and make it available on the internet at zero or low cost. But is this information actually consumed? In other words, where do people get their news?

Our study analyses detailed online survey data from the Reuters Institute on where people get their news in 36 countries. The sample includes 21 European countries, six Asian countries, the five ‘Anglo offshoots’ and four Latin American countries.

To verify the credibility of the online survey method, where possible we compare our results with other news consumption datasets using different methodologies, such as face-to-face or phone surveys. In the two countries where data is available to permit such a comparison – the United States and the UK– we find highly similar results across surveys.

It is surprisingly difficult to obtain useful evidence in this area. Almost all existing news consumption datasets are platform-centric. This means that they only cover one particular platform, such as television ratings, newspaper circulation information or any number of internet usage surveys.

Data like these provide a highly incomplete picture of news consumption, as the following example illustrates. Suppose we learn from one dataset that 50 per cent of the population get their news from television and we learn from another dataset that 50 per cent read a newspaper. If we cannot link individuals across these two datasets, this information is consistent with a situation where every citizen has one source of information or with a totally lopsided situation where half of the population is completely uninformed.

Our research instead exploits person-centric datasets. For a random sample of citizens, we aim to learn about all the news sources they use, including traditional platforms like newspapers and television as well as every form of new media – online versions of old platforms, pure internet sources, news aggregators and social media such as Facebook.

Our analysis of these data highlights three global patterns: (1) a link between socio-economic inequality and information inequality; (2) high levels of concentration in media power; and (3) dominant rankings by television companies. Our research also highlights international differences in the role of public service broadcasting.

This pattern is reflected at the aggregate level, such that countries with high income inequality also demonstrate high information inequality. The positive correlation between these two kinds of inequality is particularly evident in the two countries where the debate on news manipulation is most salient – namely, the United States in reference to the Trump election; and the UK with respect to the Brexit vote.

Second, the presence of large swathes of the population with highly concentrated news consumption means that the news organisations that cater to them are potentially highly influential. One way to measure the ‘media power’ of a specific news source is to compute its attention share, which in its simplest form is defined as the share of citizens that get news from that source divided by the total number of sources they use. By design, a news source with a large audience of individuals who tend not to use many other sources will have a higher attention share.

Table 1 displays the media power of the 10 news organisations with the largest attention shares in both the United States and the UK. A news organisation is defined as a set of jointly owned news sources. By this measure, Rupert Murdoch is the most powerful US news owner, because Fox News both has a large viewership and its viewers are information-poor: they access a smaller number of sources than users of most other sources. 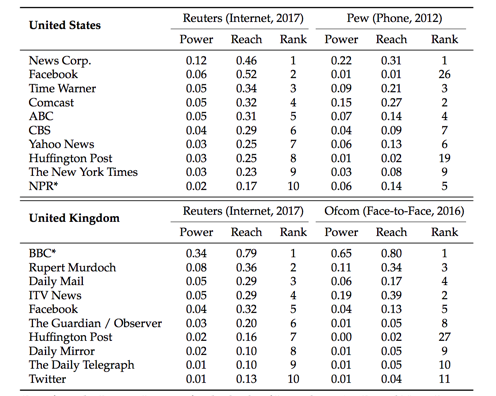 Notes: Power is defined as the maximal ability of a media organisation to swing an election, as defined in Section 2 of the paper. Reach is the share of the population that reports getting news from each source. Source: Data from the Reuters Institute for the Study of Journalism 2017 Digital News Report, the Pew Research Center 2012 Media Consumption Survey, and the 2016 Ofcom News Consumption Survey.

Another rough measure of the media power of a news organisation is its ability to swing x per cent of the votes in a national election if y per cent of its users are completely naive and will believe anything it says. According to our analysis, the presence of even a relatively small minority of naive voters could be sufficient for those media organisations to swing close election outcomes.

Our data cannot tell us whether media companies actually exercise their power to manipulate the democratic process, but media regulators around the world should certainly be concerned by the possibility.

Finally, given the continued importance of television, what is the role of direct public news provision? Of the 36 countries in our sample, 27 have a large public service broadcaster ranked as one of the top three most powerful sources. In Germany, Italy, the UK and several other countries, the most powerful news organisation is government-controlled. Do public service broadcasters reduce information inequality and are they independent from political influence by the government?

Unfortunately, the data indicate that public broadcasters do not particularly cater to the information-poor. People who watch state television are, on average, wealthier and more educated than people who use the largest commercial news provider. More positively, we find that most powerful public broadcasters tend to be politically independent, although Italy’s RAI appears to be a major exception.

In conclusion, our evidence indicates that information inequality plays an important role in determining the vulnerability of certain segments of voters to news manipulation. In turn, this makes a certain set of large news organisations particularly powerful.

Andrea Prat – Columbia Business School
Andrea Prat is the Richard Paul Richman Professor of Business at Columbia Business School and Professor of Economics at the Department of Economics, Columbia University. After receiving his PhD in Economics from Stanford University in 1997, he taught at Tilburg University and the London School of Economics. He joined Columbia in 2012. Professor Prat’s work focuses on organisational economics and political economy. His current research in organisational economics explores – through theoretical modelling, field experiments, and data analysis – issues such as incentive provision, corporate leadership, employee motivation, and organisational language. Professor Prat is a principal investigator of the Executive Time Use Project. His current research in political economy attempts to define and measure the influence of the media industry on the democratic process.

May 5th, 2018|Andrea Prat, Elections and party politics across the US, Patrick Kennedy|0 Comments
Previous post Next post