The Trump administration’s “America First” policy and sanctions on Russia and Venezuela have significant unintended consequences in the Caribbean, especially for the bauxite industries of Jamaica and Guyana, writes David Jessop.

The problem with the use of trade sanctions is that the innocent get hurt. This is particularly so when one economically powerful nation acts against another and regulations are written in such a way that they have an extraterritorial effect on third nations and their citizens. 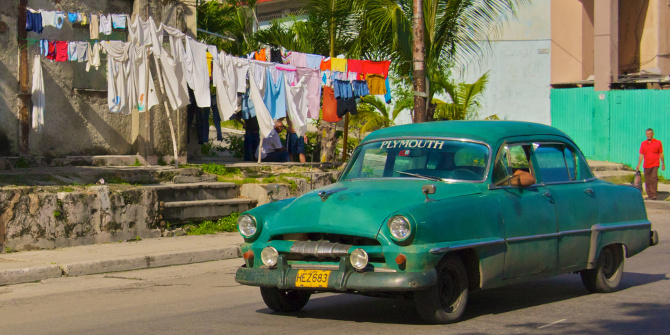 The effects of the US embargo on Cuba are nowhere clearer than on the country’s roads (Ed Yourdon, CC BY-NC-SA 2.0)

The best-known example is of course the decades-old and now multifaceted US embargo on Cuba. Enshrined in multiple pieces of US legislation it makes not just transactions that directly touch US interests subject to severe penalties, but also extends the risk to companies and individuals acting quite legally under their own country’s laws.

The intention was and still is to create uncertainty and to chill international commerce, causing banks and others to de-risk or cut off credit if, in their commercial view, their failure to do so might jeopardise their wider interests and operations in the US.

For the Caribbean the issue of sanctions is likely to become particularly acute if:

US sanctions on Rusal of concern to Guyana and Jamaica

Nothing demonstrates better the potential for collateral economic damage to the Caribbean than the uncertain effects that recent US sanctions on the Russian aluminium giant Rusal and its owner Oleg Deripaska are having on bauxite operations in Jamaica and Guyana.

In Guyana Rusal owns 90% of the Berbice-based Aroaima Bauxite Company of Guyana Inc, producing and shipping about 1.5m tonnes annually to the Rusal owned Nikolaev refinery in the Ukraine.

In Jamaica, Rusal’s ninety-three per cent owned WINDALCO operations produce about 1.95m tonnes of bauxite annually at its Ewarton refinery, which is processed into higher value alumina before shipment to Russia and other overseas markets.

Irrespective of the case that the US has made internationally about the “malign activities” of Kremlin linked entities and individuals, the future of Rusal’s bauxite and alumina operations in both CARICOM nations is potentially now under threat, leaving governments and thousands of workers deeply concerned about the possible economic and social impact.

Their unease follows a Trump Administration decision taken in early April to impose a range of sanctions on the global operations of twelve Russian companies and their owners. This was coupled with a warning that not only would US entities be “generally prohibited” from dealings with the persons and firms concerned, but that companies outside the United States could also face sanctions for “knowingly facilitating significant transactions for, or on behalf of,” the sanctioned entities.

This uncertain wording led companies, exchanges and banks globally to declare force majeure, withdrawing from their contractual obligations and resigning directorships, creating unpredictable consequences for payments to suppliers, while opening up the possibility of future de-risking decisions.

In Guyana, the government initially expressed uncertainty. However, it now appears a little more sanguine after an extension by the US of the compliance period.

Commenting last week to workers in Guyana, the country’s Minister of Natural Resources, Raphael Trotman, was quoted as saying that “there appears to be room for manoeuvre”. He went on to note that following statements by the US Secretary of the Treasury “to the effect that the US was more interested in sanctioning the owner than the company and its workers and US allies and partners who have been indirectly affected”, the compliance period had been extended from 5 June to 23 October 2018. 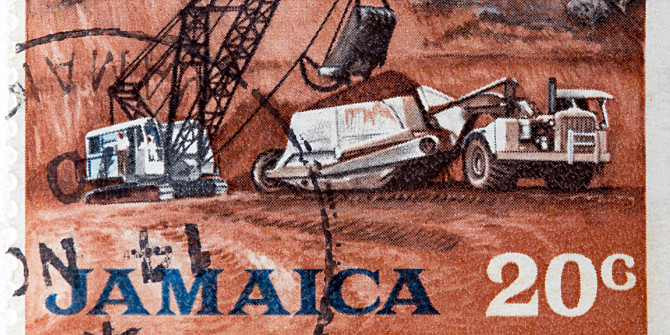 The bauxite industry has been crucial to the Jamaican economy for decades (Jamaica Post, 1977)

The Jamaica government, however, appears to be rather more concerned, with the Minister of Transport and Mining, Robert Montague, recently telling Parliament that he was actively seeking information and was lobbying US officials on the likely impact of the US decision on WINDALCO’s operations.

In an indication of the seriousness of the issue, the minister noted that despite the US making clear that “it is not targeting the hardworking people who depend on Rusal and its subsidiaries”, the government was developing a wide range of contingency plans. These he said would ensure the continuity of the company’s operations in Jamaica, which earn approximately US$164m per annum (27% of the industry’s annual export earnings), employ 1,200 people directly, and provide a significant proportion of the country’s dairy and beef production.

While governments, industry workers, and suppliers are all hoping that the issue can be resolved by the end of 2018, the concern is whether Mr Deripaska can remove himself from his complex international web of business interests in such a way that Rusal operations can return to normal.

The repercussions of sanctions on Venezuela for the Caribbean

Unfortunately, unease about the unintended extraterritorial effect of US trade policy does not end there. Most believe the US will introduce new sanctions on Venezuelan oil after presidential elections are held on 20 May 2018.

Such actions will undoubtedly cause new problems for those Caribbean nations that still depend on Venezuela for their energy supply, but more significantly this could threaten the social stability of Trinidad, Guyana, and the Eastern Caribbean if sanctions result in an exodus of Venezuelans seeking respite.

Already the US is offering support to those nations impacted by the worsening refugee crisis as citizens flee food shortages, hyperinflation, violence, corruption, and uncertainty. Washington also made clear at the bilateral and regional levels at the recent Summit of the Americas summit that part of its regional strategy is to continue support for programmes aimed at the rapid development of power generation from renewable energy sources.

Beyond this, there is a danger that the Trump administration may introduce further tariffs on Chinese goods. Though the precise impact is hard to calculate, this could have implications for a number of major Chinese investments in the region, not least the 2016 purchase by JISCO of the Alpart refinery in Jamaica and its decision to invest US$3bn in alumina production, downstream manufacturing activities, and a related economic zone.

Trade sanctions, if extraterritorial in effect, juxtapose economic globalisation with the rights of individual states to pursue bilateral economic and political relationships with whosoever they choose. Whether one agrees with US trade policy or not, Washington’s “America First” approach has unintended economic consequences for the Caribbean, and these outcomes will require mitigation.