Punishing young offenders can often ensure that they have a long relationship with the criminal justice system. But more and more authorities have chosen diversion policies such as civil citation in order to reduce the likelihood of future offending. In new research, Melissa Nadel, George Pesta, Thomas Blomberg, William Bales, and Mark Greenwald look at Florida’s civil citation program, finding that while there was little evidence of diversion being applied to those who would otherwise have received no sanction, most counties did not use the program to any meaningful extent. However, amongst those that did, juvenile arrests dropped significantly.

As juvenile crime rates have steadily dropped within the United States, a number of jurisdictions have embraced alternatives to traditional punitive sanctions for juvenile offenders, such as diversion. The implementation of these programs and policies has been associated with positive outcomes for juveniles. One important example of these types of programs is diversion through civil citation.

The Role of Diversion in the Juvenile Justice System

Diversion strategies first gained popularity during the 1960s, largely in response to the 1967 President’s Commission on Law Enforcement. These programs are intended as less punitive alternatives to typical punishments, literally “diverting” juveniles away from the justice system. While diversion programs are typically varied in design, they share three primary goals: (1) reducing the number of juveniles in the justice system and/or how far they penetrate into the system; (2) reducing the likelihood the juveniles will engage in future offending; and (3) reducing the strain on justice system resources by focusing on higher-risk offenders.

Although there is evidence that diversion programs can be effective, one key component to their success that is often overlooked is how they are implemented. If any program or policy is not implemented as intended, then the chance that it will be successful is reduced. A common problem that can occur during implementation is applying diversion services to an unintended population, namely, juveniles that would not have received the sanction in the first place. This unintended consequences is called net widening.

Net widening occurs when a program brings more people into the justice system rather than fewer. Diversion is intended as an alternative to traditional sanctions, rather than a supplement. However, often times the program is not given to the offender that would have received the more severe sanction, such as detention, and is instead given to lower-risk offenders that normally would have been sent home. This practice can have several negative consequences. Diversion is intended to reduce the number of juveniles in the justice system; net widening does the opposite. This trend, in turn, increases strain on already limited justice system resources. Finally, diversion, like any social program or policy, is unlikely to be effective when not used with its intended target population, and in some cases, it can actually increase future delinquency. 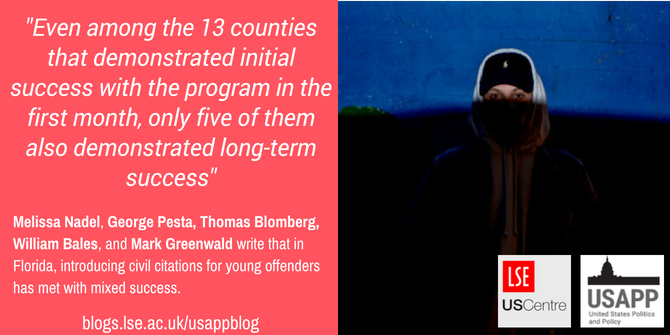 Photo by Ilya Schulte on Unsplash

Civil Citation is a diversion program that is gaining popularity in the US. First implemented in a number of counties in Florida, a statewide initiative in 2011 encouraged the adoption of the program throughout the state. This program is unique in that the diversion occurs at the earliest possible stage of the juvenile justice process—police contact. If a first-time juvenile offender commits an eligible misdemeanor offense, the responding law enforcement officer has three choices: give the juveniles a verbal warning and send them home, arrest them, or give them a civil citation. For juveniles given a civil citation, if they successfully complete their program (which varies by county, but often involves community service), they will not be subject to an arrest, therefore avoiding the consequences associated with an official arrest record. When the program is implemented correctly, juveniles that would have been arrested receive a civil citation instead. However, if juveniles that normally would have been sent home are being given civil citations, then net widening is occurring. In our study, our goal was to determine if civil citation in Florida’s counties was being used with the intended population, and to identify those county characteristics that affected the program’s successful implementation.

The Use of Civil Citation across Florida’s Counties

Using interrupted time series analysis, we found minimal evidence of net widening across Florida’s counties. As Figure 1 shows, in the first month after implementing civil citation, seven counties showed signs of net widening, while thirteen counties demonstrated successful implementation of the program. When examining the results of the introduction of civil citation, only one of Florida’s 67 counties had evidence of net widening, while nine counties demonstrated its successful long-term implementation. 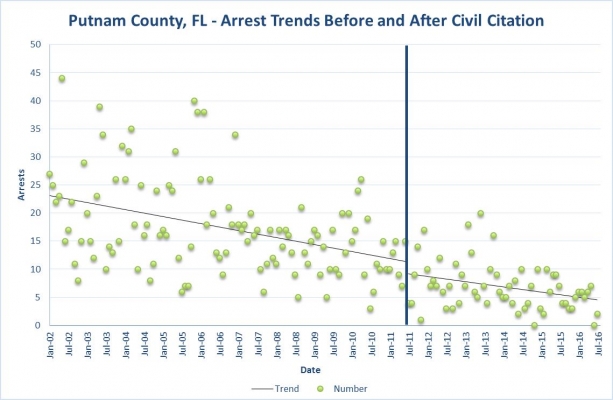 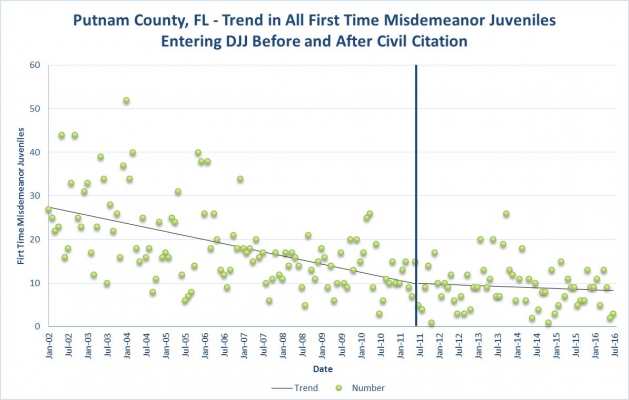 Note: After the implementation of civil citation in July 2011 in Putnam County, FL, arrests initially dropped, and then continued on their previous trend. The total number of juveniles entering the system was dropping prior to civil citation, however it stopped dropping after civil citation. These figures show an initial success of the program, followed by long-term net widening.

As proper implementation is often key to a program’s success, we next examined what it was about a county which made them more likely to both use the civil citation program and implement it successfully in the long-term. A number of county characteristics were significantly associated with both outcomes, including higher crime rates, positive economic indicators, racial and ethnic diversity, and urbanization. In addition, counties that implemented civil citation prior to the 2011 state initiative, and therefore were likely more invested in the program’s success, were more likely to both use and successfully implement the program.

Civil citation works best where it is actually needed

The results of our study show that civil citation has generally been successful in avoiding the pitfall of net widening. However, what our findings also demonstrate is that the program is not being used to any meaningful extent in the majority of Florida’s counties. Most counties did not experience any significant changes in their arrest numbers after the implementation of the program. Even among the 13 counties that demonstrated initial success with the program in the first month, only five of them also demonstrated long-term success, suggesting a drop off effect. Civil citation, and other programs like it, might benefit from the occasional “booster shot” through occasional trainings or conferences on the use and success of the program. However, the program was successful in reducing arrests across the nine counties that correctly implemented civil citation in the long term.

In addition, counties with a greater crime problem and more economic resources were more likely to not only use civil citation, but also use it as intended. These findings suggest that policies and programs that are perceived as responsive to the functional needs and related circumstances of the jurisdiction implementing them are more likely to overcome impediments to successful program implementation.

Melissa Nadel – Florida State University
Melissa Nadel is a doctoral candidate at Florida State University’s College of Criminology and Criminal Justice. Her research focuses on policy evaluation, juvenile justice, sentencing, and corrections, and has been published in journals such as Journal of Research in Crime and Delinquency and American Journal of Criminal Justice.

George Pesta – Florida State University
George Pesta is the director of the Center for Criminology and Public Policy Research in the College of Criminology and Criminal Justice at Florida State University (FSU). For the past 20 years, his research and professional experience has primarily focused upon juvenile justice and corrections. His publications have focused upon correctional education, schools and delinquency, and the effectiveness of juvenile justice programs.

Mark Greenwald – Florida State University
Mark Greenwald is a doctoral candidate at Florida State University’s College of Criminology and Criminal Justice. He also serves as the director of Research and Data Integrity at the Florida Department of Juvenile Justice, where he conducts research and evaluations on Florida juvenile justice processing, programming, practices, and policies.