No-one likes to be stuck in traffic – but what are the larger effects of delays due to congestion beyond just being late for work? Using data from Los Angeles, Yuting Hou examines how these sorts of delays influence house prices. She finds that peak-period congestion delays are linked to lower house prices because they make jobs less accessible. The negative effects of these delays are most felt in middle-income neighborhoods compared to low and high income areas.

Traffic congestion has been and continues to be a major problem in US cities. Peak-hour road congestion increases households’ travel costs and travel time, especially for daily work-related commutes. But far less is actually known about the economic impacts of traffic congestion beyond those that affect the transport system. In a new study, I examined whether households would be willing to pay more to avoid locations with higher congestion delays and less accessible job opportunities. If they were willing, which income group would pay more for better accessibility to avoid congestion delays?

Researchers have extensively studied the role of commuting costs and job access in determining how prices are distributed within cities. Some studies have identified that residential location patterns differ among households with different incomes because their time costs of commuting and demand for different sized houses are also different, while congestion will reinforce the importance of commuting costs in people’s decisions about where to live. Other studies evaluating the economic benefits of transportation investment have also found positive effects for accessibility and the associated travel time savings on housing values. However, negative congestion effects on housing markets are not often addressed, possibly because the two offsetting effects are highly correlated and are hard to distinguish from each other.

My study delves into this issue using the single-family housing market in Los Angele County as an example (see Figure 1). Los Angeles is an excellent choice of study area because of the widespread sense that its residents understand congestion. I examine whether or not that knowledge is reflected in their willingness to pay for houses. I study this using a “hedonic price model” that looks at housing prices as a function of a variety of determinants, including housing size and age, accessibility and congestion levels in different locations, transaction periods and other neighborhood-level characteristics. I estimated each characteristic with an “implicit (marginal) price” that specifies how house prices change with a per unit change of the characteristic. I then introduce a random component into the model so that I can determine how accessibility and congestion effects vary across neighborhoods of different income levels. 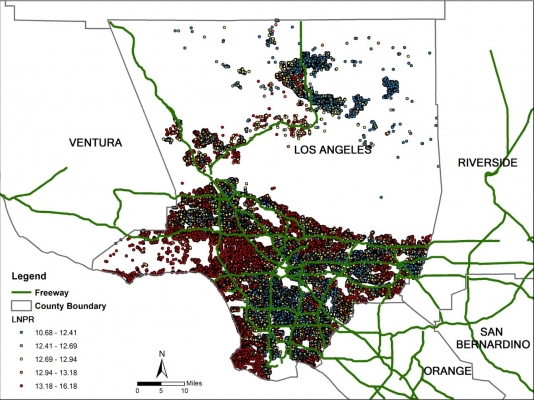 To identify the effects of congestion on house prices, I modelled travel time during the congested morning peak period and the free-flowing night period (Figure 2(a) and 2(b)). I then used regression analysis to determine if congestion really does matter to house prices. 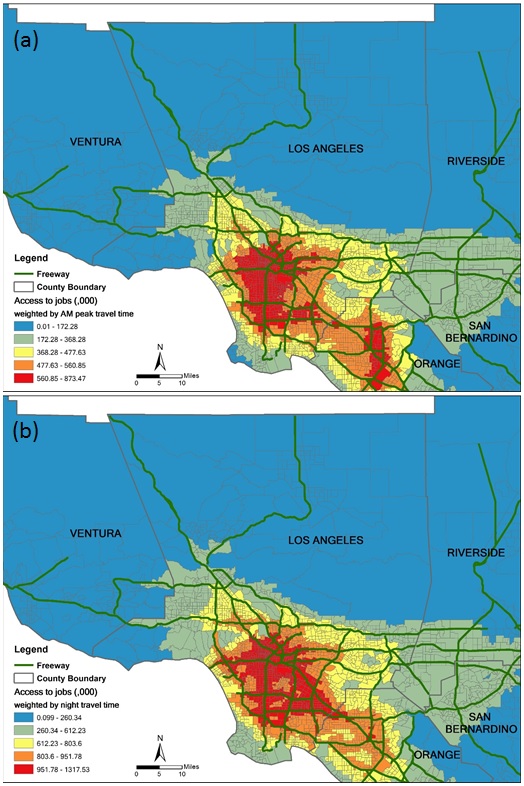 My analysis shows that the ease of job accessibility has a small but significant effect on housing prices, and locations that are more accessible during peak congestion periods are linked to higher effects on house prices: an increase of 1,000 more accessible job opportunities because of reduced travel time during these periods is associated with an 0.08 percent increase in house prices. On the other hand, greater job accessibility during when traffic is free flowing at night only adds a 0.04 percent premium to house prices. These findings imply that peak-period congestion does negatively impact housing prices by causing a “loss” of job accessibility. 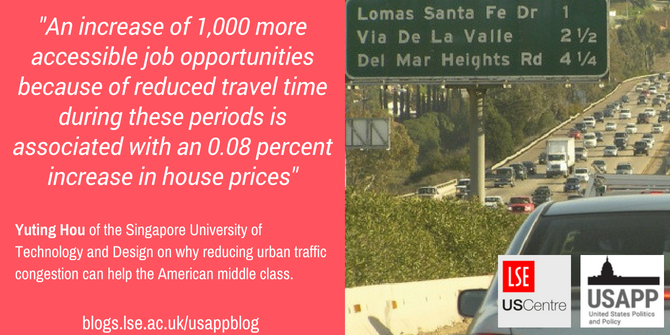 “traffic jam” by Tomi Knuutila is licensed under CC BY NC 2.0. 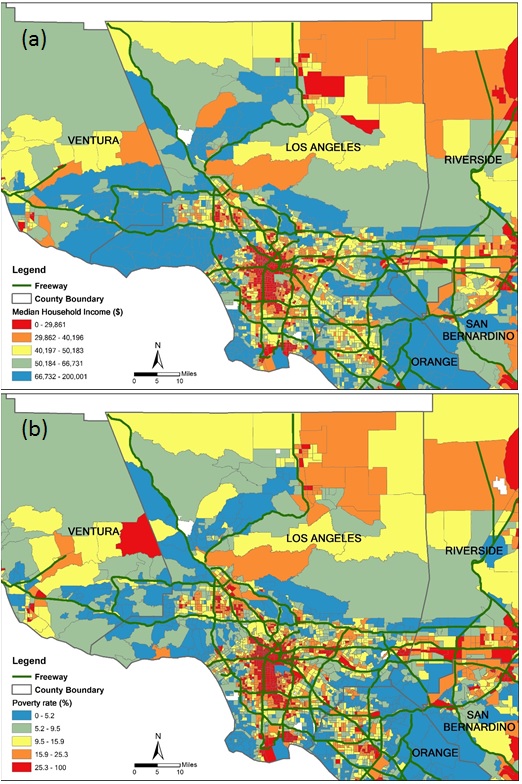 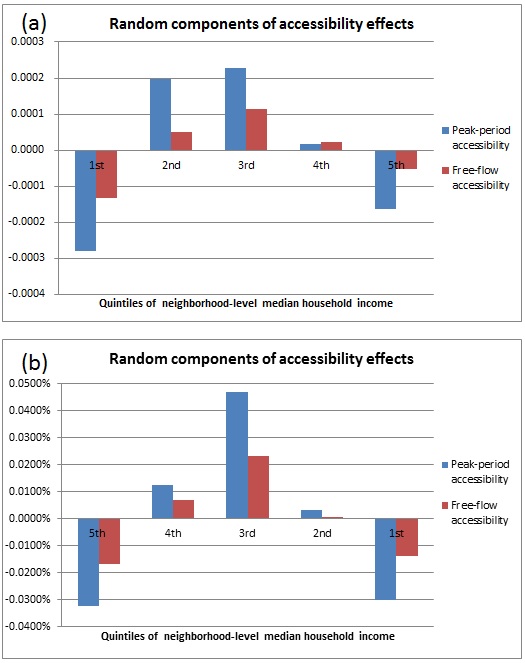 Why traffic congestion might be more important for the middle class

I propose two explanations for the smaller price effects of accessibility in the lowest-income neighbourhoods. First, most of those neighborhoods are in a central location that has a natural locational advantage of job accessibility. Second, the poorest home buyers may face a much narrower choice of residential locations, compared with other income groups, and are more likely to be constrained in places preserving most of the oldest housing stocks affordable to them, such as the central area of Los Angeles. The smaller estimated accessibility premium for the highest-income group, on the other hand, may be explained by the smaller share of commuting time/costs in the richest households’ budgets.

Moreover, the estimated effect of free-flow accessibility at night-time on house prices also varies across income clusters, and their pattern of variation follows a similar trend. Thus, it can be inferred that congestion delays will cause housing values to be lower mostly in middle-income neighborhoods and least in the lowest- and highest-income neighborhoods

My work sheds light on the potential benefits of strategies to reduce congestion. For example, improving access to job opportunities at the regional level by reducing congestion levels at those routes heavily used for regional-wide commuting trips may increase housing price at locations connected by those routes. Given the different values each income group places on job access and congestion delays, we may infer that places concentrated with middle-income households will experience the largest housing value increases from accessibility improvements and congestion mitigation.

My Los Angeles-based findings Los Angeles may also be generalized to other typical US metropolitan areas that are auto-oriented with similar pattern of income distribution. However, for many other metropolitan areas (e.g. New York, Boston, London, and Tokyo) where public transit takes an important role in relieving congestion, the effects of road congestion on housing market can be changed. Moreover, for those cities where the rich place more value on commuting costs and outbid the poor for the most job-accessible central locations, we may expect the higher-income groups to gain most from regional-wide job access improvements and congestion relief. It is encouraging to find more evidence on how traffic congestion impacts housing markets in cities of different travel profile and location pattern by income.

Yuting Hou – Lee Kuan Yew Centre for Innovative Cities, Singapore University of Technology and Design
Dr Yuting Hou is interested in research on evolutions of metropolitan spatial structure, transportation and economic development, land use and accessibility, and spatial analysis. Her current research involves examination of polycentric urban form and its evolutions, the relationships between accessibility and commuting equity, and the application of real-time data in transportation system analysis and city growth.