The election of Donald Trump in 2016 has reignited debates over immigration and race in America. In new research, Micah Gell-Redman, Neil Visalvanich, Charles Crabtree, and Christopher Fariss examine how state legislators respond to minority and immigrant constituents by sending emails to more than 5,000 elected officials in 42 states. They find that Black and Hispanic senders were less likely to receive responses compared to whites, and were especially less likely from Republican legislators. Asians, they write, were even less likely to receive responses, but this was regardless of whether the legislator was a Republican or Democrat.

Last year, the Supreme Court of the United States considered Evenwell v. Abbott, a case in which the plaintiffs argued that people who were ineligible to vote, such as persons under the age of 18, disenfranchised felons, and non-citizens, should not be counted when considering how to draw up Congressional districts.  The Supreme Court ruled against the plaintiffs, but largely left the question about who should be counted for representation unanswered, leaving the issue up to the states.  Immigrants, though, have become a lobbying force in their own right, demanding representation despite their inability to participate through voting.

Consider the case of Deferred Action for Childhood Arrivals (DACA), a legacy executive order of the Obama Administration that offers limited protections, including work and travel permits, to undocumented immigrants brought to the United States as children. When a tenuous agreement on securing legal status for these so-called “Dreamers” was reached between President Trump, House Minority Leader Nancy Pelosi, and Senate Minority Leader Chuck Schumer, the dissatisfaction was audible from across Trump’s far-right base, but in addition, many Dreamers themselves chastised Democratic leadership for compromising what, in there eyes, was too much.

Currently, a deal on “Dreamers” between both parties in the Congress and the White House is dead, however a minority of Republicans are threatening to defy their party’s leadership and force a vote on a DACA bill. The cross-partisan conflict on DACA illustrates how dealing with the increasing racial and ethnic diversity of America remains a critical question for both major political parties.  An understudied part of this major political conundrum is how our elected officials respond to an increasingly politically active immigrant constituency.  In order to examine how parties respond to an increasingly diverse electorate, we conducted a study which examined how legislators responded to minority and immigrant constituents. 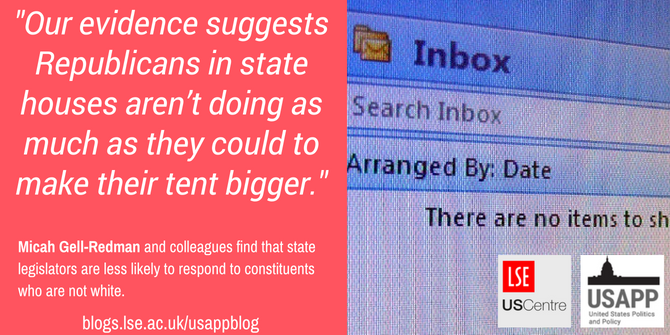 “Inbox Zero” by Dean Shareski is licensed under CC BY NC 2.0

Specifically, we sent emails from hypothetical constituents to the offices of 5,087 state legislators across 42 states. These emails contained basic requests for legislative services. The emails were largely identical, but we randomly varied a few elements to test how legislators treat minority groups. The primary goal of the experiment was to see how representatives responded to immigrant constituents, so we randomly assigned some messages to signal important immigrant characteristics, including whether the sender was born in the US.

These immigrant traits turned out to have little effect on whether or not legislators responded. What wound up being most important was the race/ethnicity of the hypothetical constituent, which we signaled through the name of the email sender. 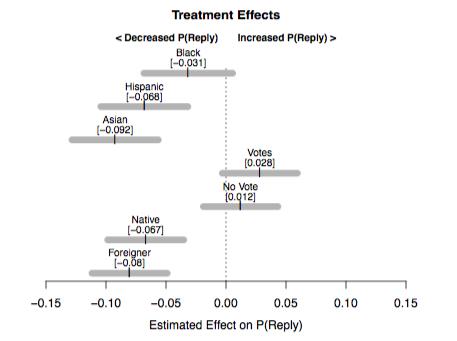 Our first finding, that minority senders were less likely to receive responses, may seem unsurprising. But we also saw a different magnitude of bias across our racial/ethnic identities. The probability of receiving a reply was 3 percentage points lower for blacks, 7 points lower for Hispanics, and 9 points lower for Asians (all compared to our white alias).

Things get even more interesting when we consider the party of the legislator receiving the email. Republican legislators responded to the Latino alias at a much lower rate than the white alias, while Democrats responded to these two groups at close to the same rate. On the other hand, the Asian alias received fewer responses from all legislators, regardless of party. 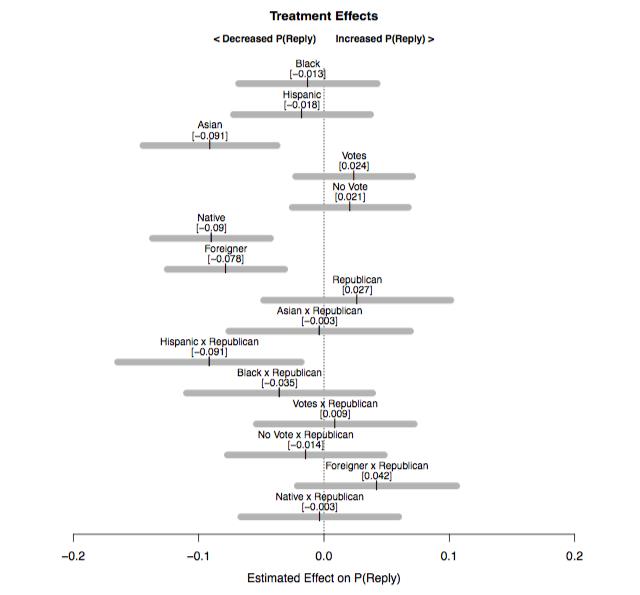 Our finding that Republicans were less responsive to Latinos could be a sign of simple racial/ethnic bias, but it might also indicate statistical discrimination. In other words, Republicans may see a Latino name and equate it with a Democratic constituent, not worth their time. In either case, our evidence suggests Republicans in state houses aren’t doing as much as they could to make their tent bigger.

On the other hand, the fact that Asian constituents were discriminated against by legislators of both parties shows how racial bias is an issue that is not exclusive to the Republican Party.  The failure of both parties to engage with this important, growing constituency could explain political ambivalence within this group and could have consequences for voter turnout.

Ultimately, as America continues to diversify, both major American parties will need to find new ways to engage with these groups, or risk alienating major chunks of a growing electorate.

Micah Gell-Redman – University of Georgia
Micah Gell-Redman is Assistant Professor in the departments of International Affairs and Health Policy & Management at the University of Georgia. His core research interest is on the impact of discrimination on governance. He has carried out or is currently implementing experimental studies of discrimination in the U.S., Mexico, Guatemala, and Korea.

Neil Visalvanich – Durham University
Neil Visalvanich is an Assistant Professor in the School of Government and International Affairs at Durham University. Neil focuses on studying politics in America, and is particularly interested in the politics of campaigns and elections, as well as the influence of racial and ethnic diversity on political institutions, mass political behavior, and public opinion.