Compared to his immediate predecessors, President Donald Trump’s administration is mired in scandal, with his former employees facing court cases and Trump’s charitable foundation now subject to a lawsuit over alleged misuse of funds. Peter Finn and Robert Ledger look to past presidential scandals to help predict what the endgame of the current ones may be. They write that scandals such as Richard Nixon’s Watergate and Ronald Reagan’s Iran-Contra can eventually paralyze an administration, and divert attention away from policy-making.

On June 15th, Paul Manafort, Donald Trump’s former Campaign Manager, was taken into custody for violating parole conditions. Manafort, it is alleged, attempted to influence witnesses in upcoming court cases against him. The previous day, meanwhile, a lawsuit was filed against the Donald J Trump Charitable Foundation. This lawsuit alleges that foundation funds were, among other mis-dealings, used to buy a portrait of Trump and to settle a lawsuit against one of his golf clubs.

Together, these cases join the long list of legal proceedings against Trump and those connected to him in some way. At least some of these proceedings may have been little more than an annoyance had they occurred in isolation. Jointly, however, their combined weight is likely to act as an ever increasing drag on the ability of the Trump administration to govern and compound the effect of other factors such as the investigation by Special Prosecutor Robert Mueller.

Manafort’s detention stems from charges laid out in indictments filed by Mueller, who was appointed to investigate alleged links between the Trump Campaign and Russia. Mueller alleges that Manafort engaged in tax evasion and failed to register foreign political work. Manafort faces two court-cases: one for charges related to alleged financial transgressions in July and another in September for supposedly lying about ‘foreign lobbying’ and engaging in money laundering.

Rescinding Manafort’s bail, Judge Amy Jackson noted that, by continually trying to contact former business associates, Manafort had attempted to interfere with ‘the administration of justice’. Manafort has pledged to fight both cases. The big question now is whether Manafort will agree a plea deal that would see him, like his former assistant Robert Gates, testify against Trump? Interestingly, Trump himself remains broadly supportive, tweeting that the treatment of Manafort was ‘very unfair’.

The Trump Foundation lawsuit was lodged by the Attorney General of New York State, Barbara Underwood, against the foundation, Trump himself and three of his children. Underwood seeks $2.8 million in restitution. Regardless of the legitimacy of Underwood’s allegations, the fact that Trump himself has pledged to fight the lawsuit indicates that at least part of his time, surely one of the most precious commodities for any head of state, will be taken up doing so.

Other legal proceedings include a lawsuit filed by the Democratic Party which alleges that Trump ‘gleefully welcomed Russia’s help’ during his election campaign, whilst adult film-star Stormy Daniels has filed two cases related to a non-disclosure agreement stemming from an alleged affair she had with Trump. There is also a range of US government investigations, with the the Mueller investigation being the most significant: all with the potential to sap political capital, time and resources further.

The Trump Presidency is clearly a break from the past, but it is useful nevertheless to examine some of the more recent precedents. Indeed, scandals and related investigations and legal cases have impacted upon American Presidents in different ways, but virtually all culminate in some degree of paralysis, and some in a more hawkish foreign policy. Watergate overshadowed the Nixon administration between 1972-1974 but initially the President continued to pursue his agenda, particularly in foreign policy. Later, as the investigations intensified and Nixon felt obliged to sack his most trusted advisors, the administration effectively ground to a halt. There is, nonetheless, one Nixonian principle that seems to have been internalised by the current President and his advisors. Nixon told David Frost in 1977 during their well-known series of interviews: “Well, when the president does it, that means it is not illegal.” 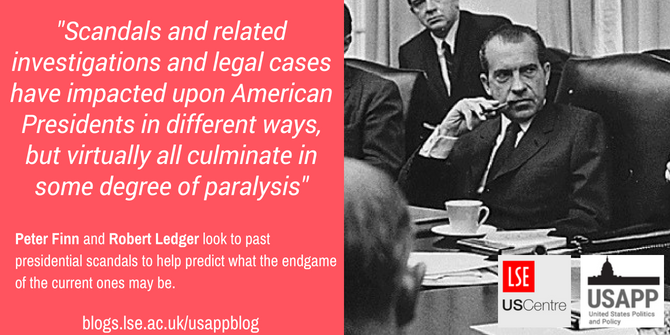 Likewise, the Iran-Contra Scandal took its toll on the final two years of Ronald Reagan’s Presidency. This scandal, unlike Watergate, did not force the President out of office, despite (as with Nixon) a Democratic majority in Congress. Consistent stonewalling and denials from the Oval Office succeeded where it had otherwise failed under Nixon.

Bill Clinton was under huge pressure in 1998 and 1999 during the Monica Lewinsky scandal. The 42nd president was criticised at the time for pursuing a more belligerent foreign policy as pressure mounted domestically. In August 1998, in the aftermath of the US Embassy terror attacks in Kenya and Tanzania, Clinton ordered the bombing of Al-Qaeda targets in Sudan and Afghanistan. Later that year Clinton bombed Iraq as part of Operation Desert Fox, a result of Saddam Hussein’s failure to disarm and implement UN Security Council resolutions. Critics lambasted Clinton for manufacturing national security issues in order to distract public opinion from the Lewinsky saga, invoking the comedy film, Wag the Dog, which fictionally imagines a similar strategy. Some contemporary commentators have already accused Donald Trump of following in these Presidential footsteps.

Clinton was ultimately impeached by a Republican dominated House of Representatives following an investigation by Independent Counsel Kenneth Starr. Although he was acquitted by the Senate, five Republican Senators also voted against party lines for acquittal.

What can these examples tell us about the Mueller investigation and the current incumbent of the White House? It seems unlikely that Congressmen or Senators would deviate from their inherent partisanship in the current political climate, indicating that Trump will probably survive whatever happens during the current congress.

On the other hand, the midterms now take on added significance for the balance of power in Washington. If Democrats take control of one or both chambers of Congress this November then the calculus will change, for both parties. Democrats will have more influence on House committees and could increase the pressure on the President, whereas Republicans may start eyeing their own electoral survival. Both Clinton and Reagan were popular, despite their respective scandals. Clinton’s approval rating never dipped below 50 percent in 1998 and 1999, while Reagan’s hovered around 50 percent in his final two years. Nixon’s approval rating, however, fell to 24 percent in 1974 and Trump’s have never been strong, although they have improved recently. As scandals mount, these are the considerations that may peel Republican support away from Trump.

The President’s growing legal woes may also, perversely, consolidate his core support. Trump’s populist tactics are to lambast so-called elites and the establishment in conspiratorial terms. It is proving relatively straightforward for Trump to malign the Mueller investigation, and the various other legal challenges, with this narrative. The approach may even be working. Recent polls show that a majority of Americans now think that the Mueller probe is ‘politically motivated’ or even a ‘witch hunt’.

Nevertheless, the legal quagmire into which Trump, his family and his associates seem to be sinking take attention away from the administration’s policy-making. Perhaps the most damning criticism of the current administration is incompetence. A lack of attention to detail, important posts lacking appointees (for instance in the State Department) and poor judgement – as well as press statements and Tweets that deal primarily with these legal issues rather than actual policy-making – will surely exacerbate the problem.

The Trump administration has a full in-box, including but not confined to the midterm elections, the eyebrow-raising Korea policy, events in the Middle East, a self-inflicted trade war, not to mention the Mueller investigation, all of which will be more difficult to deal with alongside a growing list of legal cases.

Peter Finn – Kingston University
Peter Finn is a multi-award-winning lecturer in Politics and PhD candidate at Kingston University. His research is focused on conceptualising the ways that the US and the UK attempt to embed impunity for violations of international law into their national security operations. His main case study is US led detention operations during the Iraq War. He has, among other places, been featured in The Guardian, The Conversation, Open Democracy and Critical Studies on Terrorism.

Robert Ledger – Schiller University
Robert Ledger has a PhD in political science from Queen Mary University of London. He has worked for the European Stability Initiative, a think-tank in Brussels, lectured at several universities in London and currently lives in Frankfurt am Main. He is a Visiting Researcher in the History Seminar at Goethe University and also teaches at Schiller University Heidelberg and the Frankfurt School of Finance & Management. He is the author of Neoliberal Thought and Thatcherism: ‘A Transition From Here to There?’