Conventional wisdom suggests that bad weather benefits the Republican Party because it lowers turnout in general, but particularly among the Democrats. In new research, Yusaku Horiuchi and Woo Chang Kang argue that the difference in turnout caused by rain is not enough to explain the GOP’s advantage. They find that poor weather actually makes it more likely that people will vote for a Republican over a Democrat: on rainy Election Days at least 1 percent of voting age adults changed their votes from a Democratic presidential candidate to the Republican.

Before elections, the media often comments on Election Day weather and its potential effects on an election’s outcome. In the US, a common belief is that bad weather benefits the Republican Party because it lowers turnout in general, but particularly among older and poorer voters who are mostly Democrats. As a result, in elections, the relative share of the Republican Party compared to the Democratic Party increases when it rains.

In 2006, a seminal work from Gomez, Hansford and Krause examined the effect of Election Day weather in the over 3,000 US counties for 14 US presidential elections (1948 -2000) and showed that rain reduces voter participation and increases the Republican’s two party share.

But in our new research, we critically reexamine this conventional wisdom. Specifically, we break down the Republican advantage into two parts: “differential turnout” and “vote shift” – the advantage deriving from the larger percentage of abstention among Democratic supporters than Republican supporters and/or the advantage deriving from a certain percentage of voters changing their preference as to which party they vote for. Then we analyze the same data used by Gomez, Hansford and Krause, focusing on how rainfall would change the share of the Republican Party and the Democratic Party among the total eligible voters rather than the relative share of each party in two-party votes. 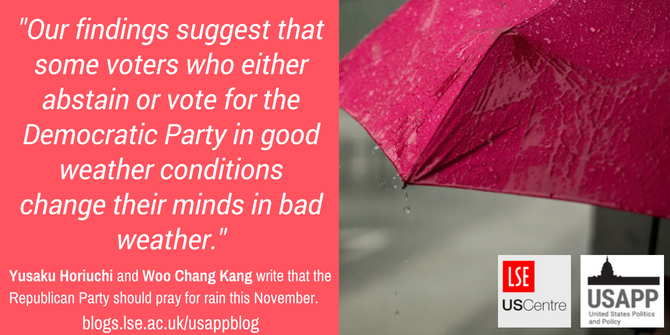 Photo by Erik Witsoe on Unsplash

Figure 1 summarizes our findings. Each black dot shows the predicted average change in the abstention rate, the Democratic Party’s vote share, the Republican Party’s vote share and the overall Republican advantage associated with about 1-inch change in rainfall. Each vertical line around the dot represents its 95 percent confidence interval. 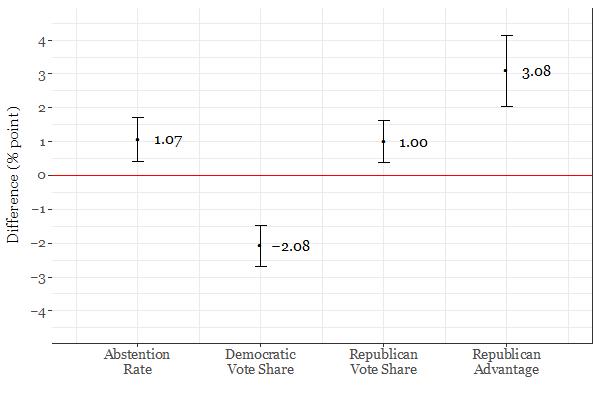 Our findings suggest that some voters who either abstain or vote for the Democratic Party in good weather conditions change their minds in bad weather. How can we explain such apparently odd voting behavior?

Previous research shows that weather conditions affect societal phenomena and activities, such as crime, homicide, suicide, and good behaviors and as well as economic decisions on stock investment, local trading and consumer spending. Research by Simonshon, for example, suggests that prospective students visiting the campus on a cloudier day are more likely to enroll in academically more demanding universities. If weather conditions affect important decisions in individual life, it is not unreasonable to consider a possibility that weather conditions would affect their partisan preference.

A key underlying rationale is that weather conditions, such as humidity, sunlight, and temperature, affect ones’ moods, which in turn affects risk attitudes. As risk attitudes and people’s preferred choices are closely related, bad weather may change not only individuals’ decisions to go to the polls but also their party preference.

In political science, recent work by Bassi and Williams present experimental evidence for this connection between weather and voter preference through the mood-risk channel. In their experiment, bad weather has negative effects on respondents’ mood and decreases their risk tolerance, which increases the likelihood that they vote in favor of a less-risky candidate. Similarly, work by Kam and Simas shows that conservatives and Republicans are more risk-averse than liberals and Democrats.

We did not directly investigate the possibility that weather conditions affect vote choice. Our study using aggregated data only allows us to estimate the downstream effects of rainfall on electoral outcomes. Individual-level data analysis is expected to provide insight into the investigation of the causal mechanism, which we leave for future research.

Woo Chang Kang – Australian National University
Woo Chang Kang is a lecturer at the School of Politics and International Relations, Australian National University. He received his Ph.D. in politics from New York University. His research specializations include pork barrel politics, voter behaviors, and public opinion with particular attention to East Asia and the United States. His work appears in Electoral Studies, Conflict Management and Peace Science, Journal of East Asian Studies, among others.