Last week Supreme Court Associate Justice, Anthony Kennedy announced that he would be retiring following more than 30 years on the bench. Lauren C. Bell writes that, while Kennedy has been a moderate voice on the Supreme Court for nearly 15 years, he has now chosen to be replaced by a Republican President and a Republican-controlled Senate. Whoever follows Kennedy, she argues, is likely to be young and conservative, and will galvanize partisans on both sides of the aisle as they move through confirmation ahead of the November midterm elections.

After a year of speculation that Anthony Kennedy would retire from the US Supreme Court, the Associate Justice made it official on June 26, 2018.  His resignation was quickly celebrated by politicians and pundits anxious to shift the Court rightward.  It was just as quickly lamented as a seismic—and even cataclysmic—change by those at the other end of the political spectrum.

Kennedy’s retirement hands President Donald Trump his second Supreme Court appointment in as many years and has broad and deep implications not only for the Court, but also for the upcoming congressional midterm elections.

When President Reagan nominated Kennedy in 1987, it was in the midst of a concerted and effective effort to bend the courts in a conservative arc.  But Kennedy was not Reagan’s first choice—he was Reagan’s third nominee for the post after both Robert Bork and Douglas Ginsburg were disqualified.  Kennedy was more moderate than either Bork or Ginsburg and was ideologically closer to Sandra Day O’Connor than to conservative icon Antonin Scalia.

As Figure 1 shows, over his 30-year tenure, Kennedy (shown in light blue) cast conservative votes in more than half the cases decided each term.  But starting in 2005, when Justice Sandra Day O’Connor retired, Justice Kennedy became the deciding vote in close cases—so frequently, in fact, that Time Magazine called him “The Decider” in a 2012 profile.   Kennedy has said that he “loathes” the term “swing vote” and that the “cases swing, I don’t.”  But my review of the Supreme Court Database demonstrates that in cases decided by a 5-4 vote between 2005 and 2016, Kennedy was in the majority in nearly 90 percent of conservative five-vote blocs, and also in an astounding 71 percent of liberal decisions decided by a single vote.

Kennedy disappointed conservatives over the years by siding with the liberal bloc on cases involving abortion rights, the death penalty, gay marriage, and affirmative action.  In April 2005, several right-leaning commentators called for him to be impeached.  Already, organizations opposed to the precedents that resulted from Kennedy’s more liberal votes have begun campaigning to make sure that the next Supreme Court justice will vote to overturn them. 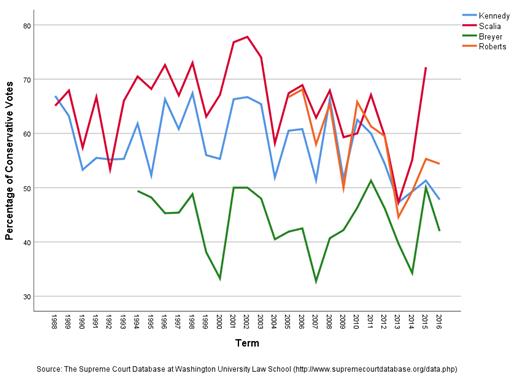 And yet: even as Kennedy’s legacy is undoubtedly one of measured, centrist jurisprudence, he has made the choice to be replaced by a Republican President and Republican-controlled Senate.

The particular political environment surrounding the upcoming confirmation battle will make for an interesting summer.  A Supreme Court vacancy is always important, but Kennedy’s announcement comes at an inflection point in American politics.  It is just four months until a congressional midterm election that may result in a change in party control of one or both houses of Congress.  The sitting president’s approval ratings have been underwater for virtually the entirety of his presidency, and negative reaction to Trump’s immigration, trade, and foreign policies have deepened public and congressional wariness of the President’s agenda.

Trump released a list of prospective Supreme Court nominees during his 2016 campaign, and affirmed that he would name Kennedy’s replacement from that list.  It is likely that the nominee will be young and very conservative. 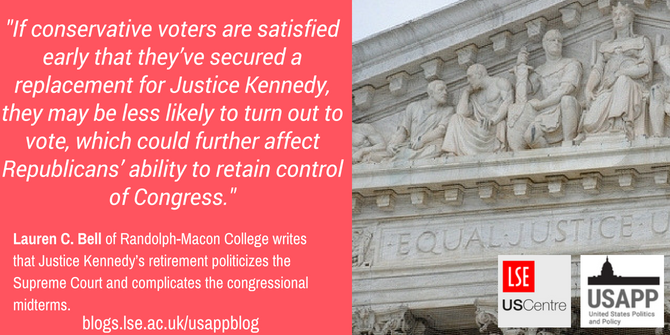 “Equal Justice Under Law” by Adam Fagen is licensed under CC BY NC SA 2.0

Whoever the nominee is, he or she is certain to galvanize partisans on both sides and shape the course of the upcoming midterm campaigns.  Senate Majority Leader Mitch McConnell has already indicated that the Senate will confirm the President’s nominee this Fall.   Democrats have limited options for preventing confirmation in light of the weakened filibuster for Supreme Court nominees, but have already begun to try to gin up public opposition to a confirmation vote prior to the start of the next Congress—when they hope to have captured a Senate majority.  And their efforts are complicated by the potential defection of three moderate senators running for reelection in pro-Trump states.

But it would be a mistake to presume an easy confirmation for Trump’s nominee.  Senator John McCain is absent from the Senate as he battles cancer.  Republican Senators Susan Collins and Lisa Murkowski have signaled their opposition to any nominee that opposes abortion rights.  Senator Jeff Flake, who is not seeking reelection, has indicated that he will block Trump’s judicial nominees until the Senate votes on whether to restrict Trump’s ability to impose tariffs, although he made that threat prior to Kennedy’s announcement.  Retiring senators Bob Corker and Orrin Hatch, both of whom have had their disagreements with Trump, may surprise the pundits and complicate the confirmation process.  And Republican Dean Heller’s difficult reelection adds complexity to efforts to hold the Senate Republican Conference together.

How much wrangling will be needed to secure confirmation votes isn’t the only unknown.  Kennedy’s resignation is effective July 31, 2018; his retirement date means that the Court will be shorthanded until his replacement is confirmed, and any case argued before a new justice is seated will be decided without input from him or her.  So there is good reason for McConnell to aim for confirmation by the end of September.

But early voting for the November midterms will begin in some states as early as mid-September, which further complicates the decision calculus for McConnell.  If conservative voters are satisfied early that they’ve secured a replacement for Justice Kennedy, they may be less likely to turn out to vote, which could further affect Republicans’ ability to retain control of Congress.

And outside the Senate, interest groups will be waging a campaign on both sides of the nomination that will ratchet up the noise around Senate confirmation to a level beyond anything we’ve seen before.

A Loss for the Court

As the politicking and punditry ramps up, July 31 is likely to pass with scant recognition outside legal circles of the ending of an era in Supreme Court history.  Inside the Supreme Court, Kennedy is deeply respected for his kindness, even-handedness and colleagueship.  Over the course of 30 years, he was often tapped by his brethren to represent the Court in hearings in front of Congress, where he quietly but firmly defended the judicial branch’s co-equal status and institutional autonomy.

Justice Kennedy’s legacy and impact on the Court—one of independence, institutional respect, compassion, and kindness—stands in clear contrast to the looming battle to replace him.

Lauren C. Bell – Randolph-Macon College
Lauren C. Bell is Professor of Political Science and Dean of Academic Affairs at Randolph-Macon College in Ashland, Virginia.  She is the author of Filibustering in the US Senate (Cambria Press: 2011) and Warring Factions: Interest Groups, Money, and the New Politics of Senate Confirmation (The Ohio State University Press: 2002), and co-author of Slingshot: The Defeat of Eric Cantor (CQ Press 2015).  She served as a United States Supreme Court Fellow during the 2006-07 academic year, and was an American Political Science Association Congressional Fellow on the US Senate Committee on the Judiciary from November 1997 until August 1998.