On Election Day 2016, 40 percent of American women voted for Donald Trump, despite his well-known history of sexual misconduct. In new research, Mark Setzler and Alixandra B. Yanus examine the attitudes of Trump’s women voters to try to understand more about why so many voted for the now-President. They find that the attitudes of Trump’s women voters were no different than men’s: even more than partisanship, both groups were influenced by sexism and racial resentment.

The conventional interpretation of the 2016 US presidential election is that Donald Trump defeated Hillary Clinton because of his decisive support among white, working-class, evangelical males—especially those without college degrees. However, 40 percent of American women cast ballots for the Republican candidate on Election Day, despite his well-documented history of sexual misconduct and demeaning comments about female opponents in both the primary and general elections. Understanding what motivated so many women to support Trump—whether it be their partisanship, demographic characteristics, or attitudes shared with his male supporters—can shed light not only on the role of gender gaps in political behavior, but also the potential future of the Republican Party and American politics more broadly.

Data from the 2016 American National Election Study (ANES) can help us to untangle the causal mechanisms behind women’s support for Trump. As has been widely documented, his voters were disproportionately male and more Republican, white, and evangelical than individuals supporting other candidates. Trump’s voters also were more likely to hold authoritarian, racist, and sexist attitudes than individuals who cast ballots for other candidates. Figure 1 below illustrates the distribution of these characteristics by gender and whether or not voters supported Trump in 2016. It is obvious that the attributes and attitudes of Trump’s female voters differed little from their male counterparts, especially when compared to voters who supported other candidates. 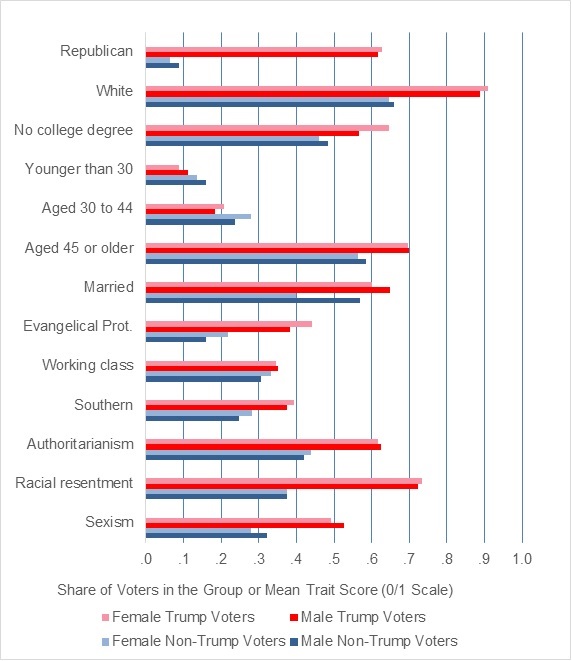 Determining the extent to which the motivations of Trump’s female and male supporters may also be similar requires multivariate analyses. Figure 2 below summarizes several key findings from our analyses that included all of the factors listed in the figure above. Figure 2 only reports results related to those characteristics that made women and men at least ten percent more or less likely to have voted for Trump. Unsurprisingly, self-identified Republicans were considerably more likely than other voters to support Trump, but there is no evidence of a gender gap in partisan influence. Despite the prevailing narrative about Trump’s electoral base being dominated by older, working-class, not college-educated men, none of these demographic indicators explain much about the motivations behind vote choice after we account for voters’ underlying attitudes. While race is significant for both men and women, after controlling for other factors including racial resentment and sexism, the remaining 14 percentage point difference between white and non-white women’s support for Trump is smaller than we might expect, given the overall race gap in American politics. 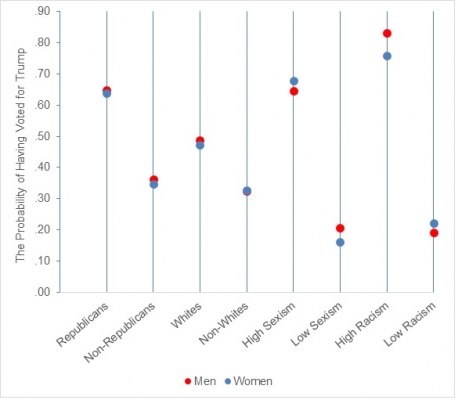 Beliefs linked to racism and sexism were the key determinants for whether or not many voters supported Trump, and they were just as powerful in shaping women’s vote choices as they were for men. Females with the highest levels of racial resentment were more than four times as likely (68 versus 16 percent) to support Trump than those with the lowest levels of racial animosity. Among women, those with the highest levels of sexism were 54 percentage points (76 versus 22 percent) more likely to support Trump than those who expressed no sexist attitudes.

Moreover, there is no evidence to suggest that Trump’s female supporters voted for him primarily because of partisanship rather than prejudice. Controlling for the other factors’ influence, possessing the levels of sexism and racism typical of female Trump voters increased the probability that a woman would vote for him by 37 percentage points when compared to women with sexism and racism scores typical among women who did not vote for Trump. By comparison, being a female Republican increased the probability that a woman voted for Trump by 29 points. 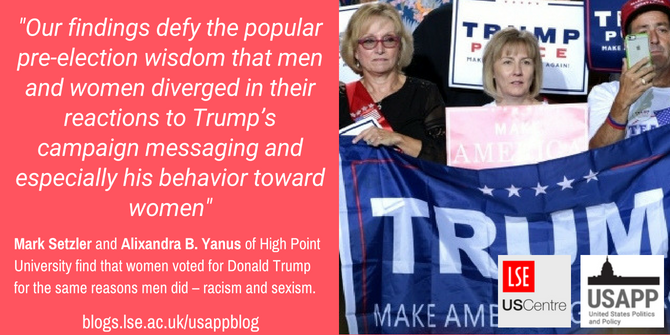 “Donald Trump supporters” by Gage Skidmore is licensed under CC BY SA 2.0

As a whole, our findings defy the popular pre-election wisdom that men and women diverged in their reactions to Trump’s campaign messaging and especially his behavior toward women. Instead, women and men who supported Trump were strikingly similar with respect to the role of prejudice in determining their vote choice.

Trump’s victory, therefore, provides important insights into the limits of the gender gap for explaining the attitudes and political behavior of American women. Although the gap in the 2016 presidential election was the largest in American history, it was only modestly greater than in 2012. The election’s outcome underscores the fact that women—despite Trump’s anti-feminist rhetoric and actions—were and are a critical element of both the Republicans’ and Democrats’ electoral coalitions. Contrary to the picture often painted by modern media accounts, women are not a monolithic liberal voting bloc. Moreover, women are not immune from the influence of sexist and racially resentful attitudes. Our findings, in fact, suggest that many American women share their male counterparts’ fears of how “outsider” groups may be altering the political landscape, an attitude observers too often attribute exclusively to angry white men.

Mark Setzler – High Point University
Mark Setzler is professor of political science at High Point University in High Point, North Carolina. His research focuses on the under-representation of political minorities in both new and established democracies. His recent scholarship on gender includes articles in Politics & Gender, Religion and Politics, and PS: Political Science and Politics.

Alixandra B. Yanus – High Point University
Alixandra B. Yanus is associate professor of political science at High Point University in High Point, North Carolina. Her research explores the relationship between political context and the representation of women in the United States. Her published work appears in journals such as PS: Political Science and Politics, Politics, Groups & Identities, and Social Science Quarterly.

August 3rd, 2018|Alixandra B. Yanus, Elections and party politics across the US, Mark Setzler|2 Comments
Previous post Next post