Since 2010, the Supreme Court has handed down a number of landmark decisions which have dramatically increased gay rights in the US. But these decisions have often led to a backlash. Using national survey data, Michael A. Zilis finds that the Supreme Court’s decisions actually undermined its legitimacy in the eyes of those who dislike gays, despite the Court’s fundamental mission to protect the rights of vulnerable groups.

Over the last decade, the US Supreme Court has dramatically aided the cause of gay rights.  In 2013, the Court struck down portions of the federal Defense of Marriage Act, a law that had restricted the interpretation of marriage so that it applied only to opposite-sex unions.  Two years later, the Court invalidated bans on same-sex marriage throughout the US.  Speaking of same sex couples in Obergefell v. Hodges (2015), the majority wrote, “They ask for equal dignity in the eyes of the law.  The Constitution grants them that right.”

In issuing these decisions, the Court was performing a fundamental task, using the Constitution as a basis for protecting the rights of vulnerable groups.  Yet not all citizens welcomed the rulings.  Limited backlash against the Court bubbled up.  In Kentucky, a county clerk refused to issue marriage licenses to same sex couples.  The Court may have been especially concerned by challenges to its legitimacy, or the recognition of its rightful authority to resolve legal controversies.  Because the institution lacks the power to enforce its rulings, it depends on other actors to ensure they are carried out.

Decisions like those involving same sex marriage are an important place to look when it comes to threats to Supreme Court legitimacy.  This is because citizens tend to have quite strong and powerful attitudes towards important social groups in the political sphere.  Though all citizens may not follow politics closely, many have clear feelings towards groups such as gays, immigrants, Evangelicals, Muslims, and labor unions, among others.  Consider, for example, the recent same sex marriage rulings, which provide an indication of the Court’s support for gay rights.  Even if citizens only follow politics intermittently, with a bit of information they may gather that the Court ruled in favor of a group about which they have strong feelings.  Group antipathy, then, may take on a critical role in shaping evaluations of the institution itself.

To study this idea regarding attitudes towards the Supreme Court, I used data from the American Panel Survey during 2012 and 2013.  During this time frame, the Court issued landmark rulings dealing with gay rights (US v. Windsor, Hollingsworth v. Perry) and immigration policy (Arizona v. US).  Survey respondents answered a number of questions regarding their feelings towards gays and immigrants as well as their support for the Court as an institution.  For example, they evaluated whether the Court is “too mixed up in politics,” whether justices “should be removed,” and even whether we should “do away with the Court.”  These are key measures of institutional legitimacy, getting at the basic authority and design of the institution.  Using this data, it becomes clear that some citizens lost faith in the Supreme Court after its rulings. 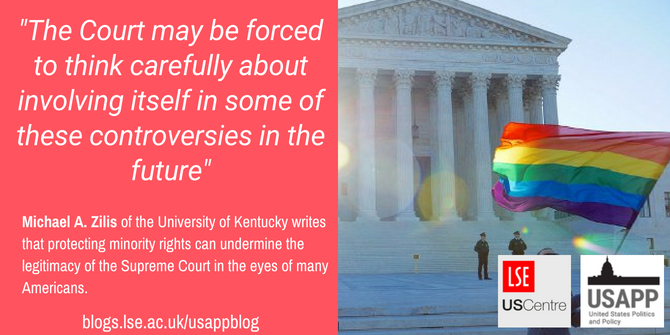 Some of the most notable declines in legitimacy were found among those with negative attitudes towards the groups involved in the Court’s high-profile rulings.  Individuals with antipathy towards gays saw the Court as less legitimate after Windsor and Hollingsworth, and those with negative views about immigrants did the same following Arizona.  On the other hand, the Court did not see a bump in support from respondents that viewed gays and immigrants in positive terms, possibly due to the stronger resonance of negative attitudes in shaping assessments.  Figures 1 and 2 depict the link between group antipathy and institutional legitimacy from May 2012 to July 2013.  On the vertical axis, the figures show changes in legitimacy on a -1 to 1 scale, with values below 0 indicating a loss in support for the Court.  As the figures show, the Court’s standing suffered among individuals who expressed high levels of dislike for gays and immigrants. 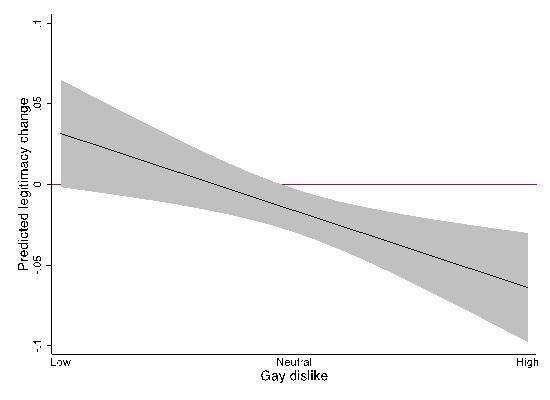 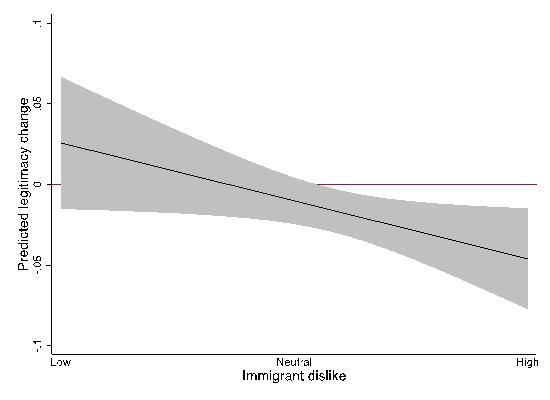 Note: The figures show lines that represent the change in the Court’s legitimacy for survey respondents from 2012 to 2013 (shaded areas show 95% confidence intervals).  The horizontal axis is the level of dislike that respondents have towards gays (Figure 1) and immigrants (Figure 2) based on responses to multiple questions about these groups.

Of course, the Supreme Court released other important rulings during this time. These rulings, in addition to many other ingredients, may shape how citizens view the institution.  But negative attitudes towards gays and immigrants appear to exert an effect independent of other factors.  For example, the results presented above come from a regression model that controls for demographic traits, ideological considerations, and support for democratic values like the rule of law, among other factors.  Even after accounting for these considerations, negative attitudes towards social groups influence the way citizens view the Court.

There are a number of implications that are worthy of attention.  Happily for the Court, the declines in legitimacy highlighted here are far from fatal.  Even as the institution faces continued criticism, many citizens still view it as worthy of basic support.  Certainly, very few Americans advocate the most drastic steps, such as eliminating the Court entirely.  Yet a limited loss of legitimacy is not innocuous either, potentially opening the door to further political resistance and even outright defiance.  In addition, cases involving prominent minority groups tend to attract quite a bit of popular attention, and as a result the Court may be forced to think carefully about involving itself in some of these controversies in the future.  This is particularly true when backlash to rulings can bring about negative institutional consequences, even if among only a segment of the population.  Ultimately, the vulnerability of the Court that my research highlights suggests a paradox: Although the institution is tasked with protecting minority rights, Americans with strong negative attitudes towards minority groups may, on occasion, penalize the Court for doing just that.

Michael A. Zilis – University of Kentucky
Michael A. Zilis is Assistant Professor in the Department of Political Science at the University of Kentucky. His research focuses on politicized resistance to the US Supreme Court from both behavioral and institutional perspectives. His work has been published or is forthcoming at Political Research Quarterly, Legislative Studies Quarterly, Social Science Quarterly, Journal of Law and Courts, Washington University Journal of Law & Policy, and Elon Law Review. His book, The Limits of Legitimacy (University of Michigan Press), explores media coverage and public support for high profile rulings of the Supreme Court and was named an Exemplary Law Book of 2015.