To tackle the opioid crisis, the US should look to Switzerland’s successes with substitution therapy

To tackle the opioid crisis, the US should look to Switzerland’s successes with substitution therapy

The US is facing an opioid crisis at a colossal scale. But Switzerland has been there before. Christian Schneider looks back to the policy innovations introduced to tackle the European nation’s opioid crisis in the 1990s. By implementing substitution therapy, heroin-assisted treatment and harm reduction measures, he writes, the US may be able to begin to get a grip not only on the health consequences of this crisis but also on the illegal supply of opioids.

American cities are increasingly considering measures to address the extraordinary costs of the current opioid crisis in the US that go beyond what is to be found in the traditional drug policy toolbox. Plans to allow safe injection facilities in some cities are likely to be the starting point for more drug policy innovation at the local level. While the current American opioid crisis is unique in many ways it might be worth drawing on some of the overlooked lessons and policy innovations that were used to tackle Switzerland’s 1990s heroin epidemic.

At the beginning of the 1990s, Switzerland was a paradise for heroin traffickers. It is estimated that the incidence of heroin use peaked in 1990 at 0.73 per 1000 inhabitants –higher than in other European countries for which comparable figures exist. Zurich, Switzerland’s largest city with 350,000 inhabitants at the time had between 6,000 and 8,000 problematic heroin users – or 1.7 to 2.2 percent of its population. Purity of and prices for street heroin were high and availability was nearly unrestricted. In every major Swiss city areas existed where drug dealing and consumption were virtually tolerated by authorities. According to interviews with consumers and police informants, heroin trafficking in Switzerland meant high profits for organized crime groups. Almost thirty years later, the Swiss heroin market looks very different. Infamous open-air drug markets such as Zurich’s Needle Park are long gone. Prices and purity are low and, according to a recent study, heroin trafficking seems not to be a particularly lucrative business anymore. Today, heroin is almost a niche market in Switzerland.

The Swiss heroin market did not transform gradually over the following three decades. Declining numbers of heroin users might have played a role in some of the changes. But price and arrest data as well as key informant interviews suggest that the market shifted within a few years starting around the mid-1990s and has remained largely stable since. It seems likely that the reforms of Swiss drug policy taking place from 1990 onwards – which included expanding access to substitution therapy, heroin-assisted treatment and harm reduction measures – have played an important role in transforming the heroin market in Switzerland. Measures to lower the threshold for substitution therapy included the prescription of substitution products by general practitioners, take-home doses for several days or more for participants with stable consumption patterns, no requirement of abstinence from street heroin or other illicit drugs, no compulsory drug-testing for participants and open-ended therapy without explicit abstinence-oriented therapy goals. 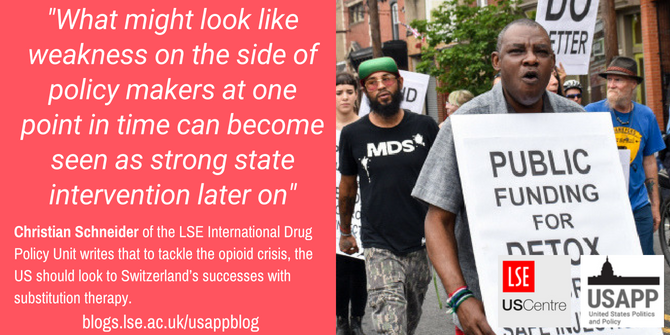 “Philly March against evictions of homeless encampments” by Joe Piette is licensed under CC BY NC SA 2.0

At the time and, indeed until today, the exact mechanisms of the interaction between the illegal heroin market and the legal, state-sponsored market for opioid substitution products remained underexplored. It is more than plausible to assume that low-threshold substitution therapy deprived the illicit market for heroin of millions of Swiss Francs in turnover each day, making heroin trafficking much less lucrative than it could be if substitution treatment did not exist or would only be available to a smaller group of consumers. Further, it is plausible, that the adjustments in price, purity and organization of supply observed on the Swiss heroin market in the past decades were at least partially caused by the presence of low-threshold opioid substitution therapy. Street heroin, injected or inhaled, and orally consumed, pharmaceutical methadone, buprenorphine or morphine are not perfect substitutes and consumers might have a desire to consume one or the other depending on set and setting. However, for many Swiss consumers their main opioid of choice has become methadone or another substitution product.

Hence, the case can be made that the major transformation Switzerland’s markets for opioids have experienced might not have been from a highly dynamic, lucrative illicit market to a stable one, but from a market dominated by illicit entrepreneurs offering one product to one dominated by a state-sponsored alternative. Low-threshold opioid substitution therapy was not primarily introduced to change the economics of the Swiss heroin market. Opioid substitution therapy was a public health intervention, offering heroin consumers alternatives to high-risk consuming behaviors. Its impact on the Swiss market was most likely an unintended but welcome consequence of policy change. The state entered and shaped the illicit market by allowing low-threshold, nearly unconditional and almost free access to a viable substitute to a product it (and society more broadly) deemed dangerous and damaging.

In any other market, state intervention at this scale should be considered problematic. In the heroin market, however, such an intervention might not only be justifiable but also efficient. Obviously, opioid substitution treatment is costly and, through the Swiss health insurance system, made the majority of society pay for the addiction of a few for almost three decades now. But it is very likely that the societal costs of the existence of a highly lucrative heroin market with several trafficking groups competing for market shares and police forces trying to keep them in check would be even more expensive.

No matter what measures US cities will take to rein in the current opioid crisis, the Swiss experience holds three lessons for them. The first is that policies can have unintended consequence. Measures to improve the health of drug consumers can also have an impact on supply. Second, what might look like weakness on the side of policy makers at one point in time– in the Swiss case the dismissal of abstinence-based treatment in favor of long-term opioid substitution treatment – can become seen as strong state intervention later on. Third, before starting any policy experiment, finding measures to accurately understand the market is essential. If the Swiss had done so thirty years ago, they would be in much better position today to understand what large-scale, low-threshold opioid substitution treatment had done to Switzerland’s heroin market.

Christian Schneider – LSE International Drug Policy Unit Research Associate
Christian Schneider is a Swiss-based illicit drug market and drug policy analyst. He holds a PhD from the University of Zurich and his research interests focus on how states address the challenges of transnational illicit flows, with an emphasis on how these flows are measured and monitored, how government agencies adapt to them and why states create international frameworks to solve the problems created by them. . He also serves as a member of the International Police Advisory Group of the Law Enforcement and HIV Network (LEAHN). He is currently working as an organized crime analyst at the Swiss Federal Office of Police. This article does not represent the official views of the Federal Office of Police.