Conventional mortgages are not backed or issued by the government and typically have fixed interest rates and terms. These mortgages are generally ideal for borrowers with good or excellent credit.  However, those without excellent credit may not qualify for optimal interest rates. Federal Housing Administration-insured mortgages, on the other hand, are backed by the Federal Housing Administration in the event of borrower default. These mortgages are meant to benefit those with lower income, credit scores, and down payments. However, on the downside, they come with large upfront and annual premiums in order to finance the government-backed mortgage insurance.

My analysis of mortgage denial rates by race between 2009 and 2015 reveals that there is approximately a 24 percentage point gap between African Americans and whites in the conventional mortgage market and a 10 percentage point gap in the Federal Housing Administration-insured market (shown in Figure 1 below). Thus, there is a much greater disparity in denial rates between African Americans and whites in the conventional market. This may intuitively make sense since these loans are meant to benefit individuals who would have a difficult time qualifying for prime conventional loans. 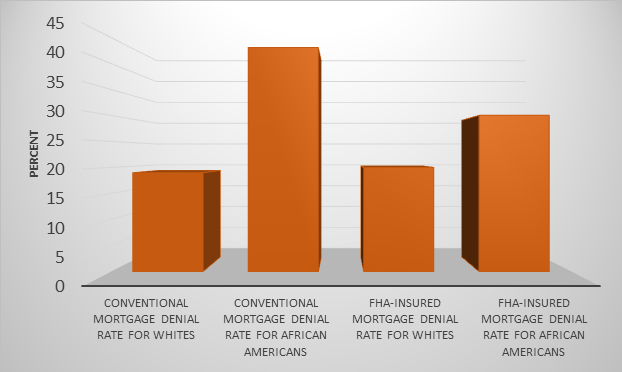 As it turns out, research shows there is a link between racial prejudice and racial denial gaps among home mortgage applicants, and these links are particularly strong in the conventional mortgage market (shown in Figure 2 below). This is especially true for the first mortgages taken out when a home is purchased and mortgages written by depository lenders. Conversely, these links are not particularly strong in the Federal Housing Administration-insured mortgage market. This may be because greater government oversight of the Federal Housing Administration-insured market makes it more costly for lenders to discriminate for fear of fair lending litigation. Further, because these mortgages generally have more-standardized terms than conventional mortgages, it may be easier for the government to uncover evidence of discrimination at the bank level in the Federal Housing Administration-insured market. 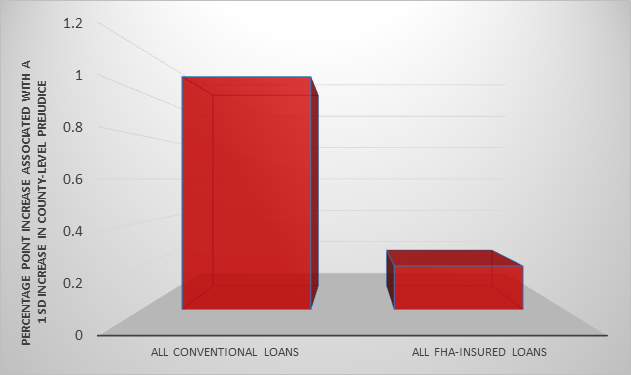 So how exactly does one measure the amount of racial prejudice present in a local area? Many researchers have looked to the General Social Survey, which gathers data in an attempt to monitor changes in attitudes, behaviors, and attributes in American society. In additional to questions related to many other topics of special interest, the General Social Survey also asks many questions focused on racial attitudes toward African Americans.

For example, questions such as “If your party nominated a black for President, would you vote for him if he were qualified for the job?”, “Do you agree that a homeowner should be able to decide for himself whom to sell his house to, even if he prefers not to sell to blacks?”, “Do you think there should be laws against marriages between blacks and whites?” and “Do you agree blacks shouldn’t push themselves where they’re not wanted?” have been mainstays in the survey over the years. The responses to questions such as these can be aggregated at the national, regional, state, or local levels, and aggregation at the local level can provide a lot of information about the extent of racial prejudice in the local area. 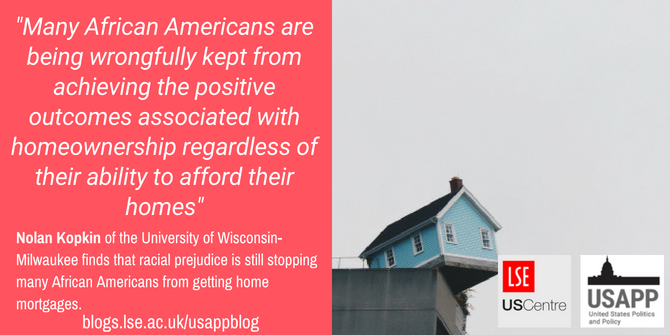 Aggregating the relative amount of racial prejudice against African Americans by whites at the regional level produces information reflecting conventionally held beliefs about the distribution of racial prejudice in the United States (shown in Figure 3 below). For instance, the East South Central region consisting of the states of Alabama, Mississippi, Kentucky, and Tennessee is shown by far to be the most racially prejudiced against African Americans. The rest of the South containing the South Atlantic and West South Central states also ranks incredibly high based on this metric. On the other end of the spectrum, the West containing the Pacific and Mountain states exhibits a particularly low amount of racial prejudice based on this metric. 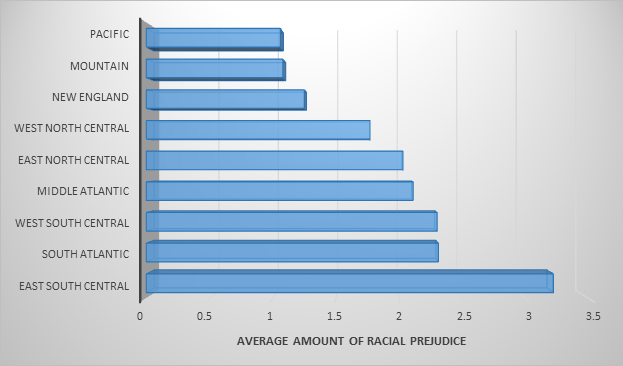 Aggregating the relative amount of racial prejudice against African Americans by whites at the local level – among counties – produces the estimates of the relationship described earlier between racial denial gaps for home mortgage applicants and local area-level racial prejudice. These estimates account for other observable characteristics of the borrower, too, such as gender and income. But because the publically available data on mortgage lending does not contain other borrower characteristics that banks take account of in the lending decision, they are accounted for instead using estimated county-level gaps in wealth, creditworthiness, education, and employment between all African Americans and all whites living in each area.

Racism hurts African Americans’ chances of getting a mortgage

The evidence suggests that racial prejudice is having an adverse impact on the ability of African Americans to obtain home mortgages. Therefore, many African Americans are being wrongfully kept from achieving the positive outcomes associated with homeownership regardless of their ability to afford their homes. Such behavior by lenders has negative implications for wealth creation, income tax benefits, and emotional satisfaction for African Americans.

Nolan Kopkin – University of Wisconsin-Milwaukee
Nolan Kopkin is an Assistant Professor in the Department of African and African Diaspora Studies at the University of Wisconsin-Milwaukee. He received his PhD in Economics at Cornell University and studies demographic differences in wages, education, self-employment, and access to credit markets, and discrimination in and out of the labor market, among other topics. He has published economic studies in academic journals such as Applied Economics, Journal of Sports Economics, Review of Black Political Economy, and Urban Studies, among others.