Every year, hundreds of thousands of Americans apply for green cards and citizenship for their non-American spouses. And while gender and race-based discrimination is a thing of the past in US immigration policy, new research from Gina Marie Longo reveals that gender inequality is alive and well in the forums where petitioners seek immigration advice. Studying over 2 million online conversations about immigration, she finds that the advice given is often gendered and racialized depending on petitioners’ race and gender, and on their spouse’s country of origin.

Because foreign nationals who marry US citizens have a fast-track to permanent residency (i.e. “green-cards) and US citizenship, immigration officials worry that undesirable immigrants will try to obtain immigration papers by duping love-sick Americans into marriage. US consulates often warn American citizens in such relationships to beware of red flags, particularly those involved with nationals from countries considered high risks for marriage fraud. Red flags or indicators of potential marriage fraud include large age differences, short courtships before marriage and requests for money. Lawmakers also require that petitioning couples submit evidence that their relationships are “valid and subsisting” (i.e. for love) and not fraudulent (i.e. for immigration papers).

These written warnings and requirements are gender- and race- neutral, but the historical foundations of US citizenship and immigration policies are not. Originally, US laws tied women’s citizenship to their husbands, impressing upon them their roles as mothers and wives. Native-born women citizens lost their citizenship status if they married foreign nationals, and they could not make immigration petitions for foreign-born husbands. However, men who were citizens had no such restrictions. Men and women from certain racial groups were barred from coming to the US on the basis of sexual immorality, and laws regulated white women from racially mixing with men of color.

Today, women have citizenship rights autonomous from their husbands, and may petition US immigration on behalf of foreign spouses; ultimately, conferring their citizenship status to their partners. Racially-biased immigration laws have been replaced with a preference system, prioritizing petitions of immigrants with US family ties regardless of gender or race.

How do people talk about immigration on online self-help websites?

The ambiguity surrounding the meaning of immigration’s policies leads men and women petitioners to seek advice from legal experts and from other petitioners about the potential obstacles to their petitions’ success. Given the gendered legacy of US citizenship, how do US men and women petitioners interpret these neutrally-worded policies about red flags indicating potential marriage fraud and legitimate marriages for immigration?

To answer this question, I conducted a study of a large, US immigration self-help website consisting of over 2.2 million conversations where over 113,000+ US citizen petitioners are exchanging such advice.  I compared conversations threads between members of two “high-fraud risk” regional sub-forums, the Middle East/North Africa forum (MENA) where mainly white, US women are petitioning for MENA-region husbands and the Belarus/Russia/Ukraine forum (BRU), populated by white US men petitioning for BRU-region wives.  I found that both men and women petitioners give meaning to the generic relationship criteria and warnings of US immigration policy by drawing on gendered and racialized understandings of the idealized image of the white, middle class “all-American family,” where women as mothers and caretakers, are subsumed under their husbands, and men as breadwinners head the household.  This creates a set of sexual and gender double standard surrounding men and women’s sexual agency, fertility, and desirability to determine which red flags will concern immigration officials and for whom, and places a disproportionate amount of relationships scrutiny and suspicion on US women petitioners’ relationships.  I argue that when citizens use ideological understandings about gender and family themselves to give each other petitioning advice and evaluate the legitimacy of peers’ relationships for immigration, they uphold gendered citizenship inequalities that are no longer explicitly named in the law.

Across the two regional forums, short courtships are not uncommon, but only raise red flags for citizen women. Both men and women petitioners see men who seek relationships abroad as sexual agents, whereas women who pursue such relationships are seen as desperate fools and even potential victims.  Thus, women posting on the MENA-forum view their peers’ relationships as inherently suspicious. They discourage women that they see as “moving too fast” from petitioning, lest they are used by predatory foreign men for “green-cards.”  Conversely, men posting in the BRU-forum were unconcerned about being defrauded for green-cards, taking for granted their control of the relationship. To them, pursuing foreign women abroad and bestowing citizenship status unto their chosen mate falls in the bounds of normal expectations of masculinity. This bolsters their relationships’ legitimacy.

In both forums, the “age difference” red-flag is only problematic when US citizen women are the older partners.  MENA-forum women tied age difference to women’s reproductive potential.  Childbearing signals “real” relationships because it aligns with expectations of family. Women and their husbands should want babies.  Because older women petitioners are considered menopausal, peers see them as “desperate for love” and vulnerable to scams, since they have nothing to offer younger, MENA-men except their citizenship status.   In the BRU-forum, age difference did not matter. The gendered expectation is that men “marry down” whether in age or socio-economic status. For older men petitioners, age difference demonstrates their virility, since their sexuality is not tied to their reproductive capacity. BRU-forum members often reported that US immigration officials did not care about age differences. Even 30-year differences were considered “normal” and unproblematic. 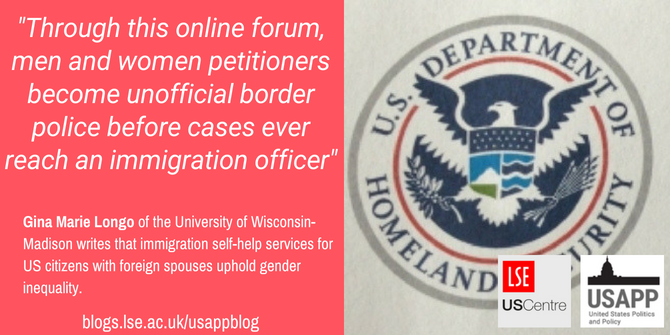 “Green card!” by Jude Matsalla is licensed under CC BY NC 2.0

New members in both forums also asked successful petitioners if sending money was considered a serious red flag. Yet again, only women petitioners considered this a negative. Women sending money to their partners abroad could not make the case that their relationships are genuine, because it casted doubts on the foreign partners’ breadwinning potential.  Conversely, BRU-forum members saw sending money to BRU-wives as proof of their abilities as providers, making their relationships appear more genuine.  Only when a BRU-woman failed to respond to financial support with gratitude, subservience, and sexual availability did men petitioners question the integrity of their peer’s relationship.

Together, these sexual and gender double standards create different access to relationship legitimacy criteria for men and women petitioners.  The burden of proving that relationships are “real” falls disproportionately on women, and has more negative effects on women citizens’ ability to exercise choices than on men citizens’.  Men petitioners can pursue various sexual partners, however real the risk of fraud, whereas women with the same intentions are considered desperate fools, incapable of controlling their emotions or the border. Consequently, US women petitioners’ relationships appear more suspect and in need of policing.

Although my study cannot tell us how immigration officials actually determine marriage fraud, as petitioners share their own experiences with immigration and frame advice based on them, they reveal the process of micro-implementation of policy by everyday citizens. Rather than neutrally interpreting policy to expand opportunities for more equitable forms of citizenship, women petitioners play an active role in upholding gendered citizenship by perpetuating the idea that women need protection and casting doubt on their peers’ abilities to responsibly select partners for migration.  Men citizens are able to deflect suspicion on their relationships and uphold their citizenship power through their interpretations of policy.

In 2016 alone, nearly sixty percent of the 1.1 million “green cards” issued were to US citizens’ foreign family members, with foreign spouses and fiancé(e)s being issued the most. While American men and women, through tourism and the internet, have more freedom to find romance abroad, the specter of gendered forms of citizenship implicitly remains in the US spousal reunification process. Through this online forum, men and women petitioners become unofficial border police before cases ever reach an immigration officer.  This makes state intervention or explicit policies unnecessary to uphold gender inequalities in petitioning process.