For now, hormonal contraception is available only to women. But to what extent to men help to manage this contraceptive method alongside their partners? In new research, Ann Fefferman and Ushma D. Upadhyay find that despite literature which suggests men can often be absent or coercive in contraceptive management, they are often active partners in this area, even while facing difficult circumstances which can constrain their choices.

It may seem intuitive that women tend to take care of hormonal contraception.  It is crucial that women have the freedom to choose a contraceptive method, use that method, and manage side effects in a way that works best for them. Women have a wide range of methods to choose from, including the pill, patch, vaginal ring, implant, and intrauterine device. These methods allow people to ditch the condom and enjoy increased sexual pleasure and spontaneity with lower chances of having an unintended pregnancy.

But research has yet to explore the possibility that men might have the potential to be involved in managing these methods with women. In other words, does the fact that these contraceptive methods affect women’s bodies mean that men don’t see a role for themselves in pregnancy prevention?   No. In our research, we find that some men do see themselves as partners in contraceptive use and management. Our work focuses on young low-income American men and women of color and the ways they work together to manage contraception without restricting women’s choices.

Through in-depth interviews with 40 men and women 15 to 24, we find examples of men helping with contraception, such as coming to appointments with their partners, discussing risk of pregnancy with partners, helping to choose a method, and reminding partners to take pills or to remove the vaginal ring. Often men initiated their own engagement; other times women partners suggested ways they wanted men to take part in contraception.  In either case, men strived to be helpful and caring partners, contrary to much of the existing literature depicting men as absent or coercive.

We also note how men and women worked together to prevent pregnancy despite the different circumstances constraining their choices, such as immigration laws, gang membership, neighborhood violence, and poverty. In this way, our research adds to current literature working against the stereotypes often applied to young low-income men of color when people talk about unintended pregnancy in the United States, such as the assumption that young men are uninterested or unconcerned in matters of reproductive health, family planning, and/or childcare, Contrary to these stereotypes, the men in our research did care about their partners and their ability to manage the risk of unintended pregnancy. 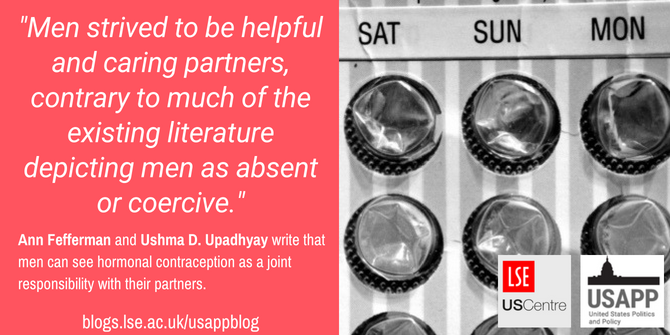 “ritual” by Monik Markus is licensed under CC BY 2.0

While our research shows these positive examples of how young men can work within or against difficult circumstances to support women with contraception, we also show how they aren’t as “feminist”, or “egalitarian”, as they might think. Even though the men in our study were really involved in choosing and using contraception, they still thought women were ultimately the ones responsible for contraception and its effective use. Men were just helpers; much like many men may “help” in the kitchen or “help” with taking care of the kids. Men used language that seemed equitable, saying that they were not responsible for contraception because they did not want to undermine women’s ability to make choices about their own bodies. Even women we interviewed agreed with these ideas.

Some may argue there is nothing wrong with this. Men were trying to be helpful, and there is clearly merit to this perspective. Certainly the men in our study showed a genuine effort to maintain a supportive, non-coercive role in women’s lives and in their mutual goals to prevent unintended pregnancy. Indeed, this may provide a strong burst of hope in America’s Trumpian era in which women increasingly fear facing major restrictions in basic access to safe reproductive health care. Our study does not intend to dismiss men’s efforts, nor in any way frown on their benevolent intentions.

Our work ultimately points to the intersectional tensions that men face in striving to be progressive, supportive partners. It questions how gender functions in contraceptive management and tries to envision what a more ideal and equitable division of responsibility might look like in the day-to-day lives of men and women who aim to prevent pregnancy together.

Ann M. Fefferman – University of California
Ann M. Fefferman, MA is a PhD candidate in Sociology at the University of California, Irvine. Her research interests focus broadly on gender, masculinities, reproductive health, the family, and inequalities. Currently, she is working on her dissertation, which investigates and compares masculinities in different stages of reproduction, with a focus on contraceptive management, pregnancy intentions, and abortion decision-making. In particular, she intends to further her studies in medical sociology.

Ushma D. Upadhyay- University of California
Ushma D. Upadhyay, PhD, MPH is an Associate Professor of Obstetrics, Gynecology, and Reproductive Sciences at the University of California, San Francisco and Director of Research for the University of California Global Health Institute’s Center of Expertise in Women’s Health, Gender, and Empowerment. She holds a National Institutes of Health Career Development Award to study gender-based power among young men and women and its effect on contraceptive use. Her current research focuses on the development and validation of the Sexual Health and Reproductive Empowerment for Young Adults (SHREYA) Scale.