The Trump administration  is considering measures to restrict Chinese citizens from performing sensitive research at American universities and research institutions. The boycott appears to  be motivated by fears that Chinese researchers may be carrying out espionage activities and handing over sensitive US discoveries to the Chinese government.

The exact details of the restrictions  are still under discussion but they would probably affect graduate students, postdoctoral researchers and employees of high-tech companies in the United States on temporary visas. Roughly 300,000 researchers every year could fall victim to these measures.

While the overall effects of such a boycott are hard to foresee, there are lessons from history that can inform policy-makers about the possible detrimental long-run effects for scientific progress and technological innovation. In a recent study, we explore the repercussions of a boycott against scientists that arose as a result of the First World War.

As that conflict began, the world split into the Allied camp (the UK, France, later the United States and several smaller countries) and the Central camp (Germany, Austria-Hungary, the Ottoman Empire and Bulgaria). The involvement of scientists in the development of chemical weapons, and the extremely nationalistic stance taken by many in support of their homeland pitted the opposing scientific camps against each other.

Immediately after the end of the  war, Allied scientists enforced a boycott against Central scientists, which separated scientists from opposing camps until  the mid-1920s. Our study finds that the increased barriers to international scientific co-operation during the boycott led to a decline in the number of papers published by scientists on either side.

Affected scientists also produced fewer scientific breakthroughs, measured by the introduction of novel words in paper titles and by nominations for a Nobel prize, and fewer of their scientific discoveries found application in patents. These results show that barriers to international scientific co-operation not only slow down the production of basic science, but that they also harm the application of science in the development of new technologies.

The importance of frontier knowledge for the generation of ideas

The creation of ideas is crucial for scientific progress, technological innovation and economic development. One of the major inputs in the creation of new ideas is existing knowledge, something described most famously by Isaac Newton in his 1675 letter to Robert Hooke, where he wrote:  ‘If I have seen further, it is by standing on the shoulders of giants.’

This quotation not only emphasises that scientists build on existing knowledge to produce new ideas, but also that knowledge produced by scientific ‘giants’ – that is, frontier research – is particularly important. Access to existing knowledge not only fuels basic scientific progress, but it is also key for the development of new technologies.

Scientific articles that cite frontier research are more likely to become a ‘hit’ – that is, to end up in the top 1 per cent of the long-run citation distribution. But while citing the research frontier is correlated with writing hit papers, it is not clear whether access to the research frontier has a causal effect on the production of high-quality ideas.

The correlation could be motivated by networks of highly productive scientists, who mostly cite each other’s research, such as the physicists who advanced the quantum revolution in the 1920s  and 1930s. Because of this and other endogeneity concerns, researchers have not been able to isolate empirically the causal effect of frontier knowledge on the creation of ideas.

To overcome these challenges, we study the dramatic decline in international scientific cooperation that occurred during the First World War and the early post-war years. Allied scientists were suddenly cut off from their peers in Central countries, in particular from Germany, a country whose scientists had received more than 40 per cent  of Nobel prizes in physics and chemistry  in the pre-war period. Similarly, Central scientists were cut off from their peers in Allied countries; in particular from the UK (20 per cent of Nobel prizes), France (15 per cent of Nobel prizes) and the United States, the rising scientific superpower. 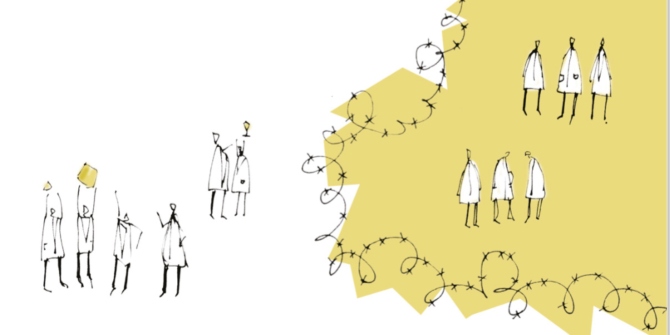 This schism in the scientific world persisted during the post-war years because Allied scientists organised a boycott against Central scientists to punish them for their involvement in the war effort. The boycott was strongest in the first years after the war and lasted until 1926. We document that the delivery of international journals was severely delayed, and that international conferences were cancelled or only involved scientists from one of the warring camps (see Box 1).

We show that the First World War and  the ensuing boycott against Central scientists severely interrupted international scientific cooperation. After the conflict began, papers cited relatively less research from outside the camp, compared with research from home. Similarly, papers  cited less research from foreign countries inside the camp, but this decline was markedly smaller. Importantly, the decline in international citations did not only affect average quality research but also research at the scientific frontier.

Figure 1 – Central scientists at the Solvay Conferences in Physics 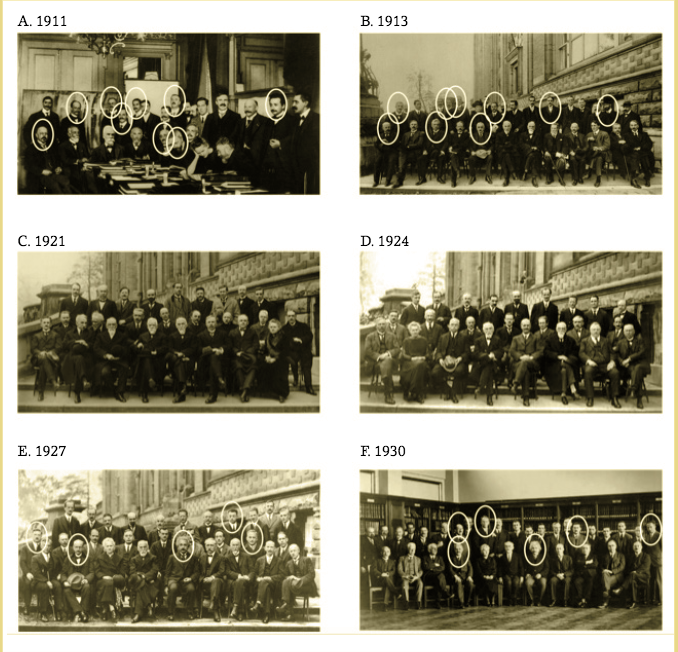 We also investigate whether the collapse in international scientific cooperation affected the direction of research in the opposing scientific camps. Using the machine-learning technique known as Latent Semantic Analysis, we document that the similarity to papers from outside the camp fell sharply after the onset of the First World War and then slowly recovered during the 1920s.

In the second part of our study, we show that reduced international scientific cooperation led to a decline in the production of basic science and its application in new technology.

The interruption of international knowledge flows led to stark declines in the production of research deemed worthy of a Nobel prize nomination. Furthermore, scientists introduced fewer novel scientific concepts, as measured by the introduction of novel scientific words – for example, magnetron and electroencephalogram.

Scientific fields that were suddenly cut off from the research frontier produced fewer scientific concepts that were used in patents. Thus reductions in the output of basic science also had a negative effect on the development of new technologies.

Access to the knowledge frontier needs to be interpreted in a broad sense: not only physical access to journal articles, conferences and research seminars; but also discerning the thin, ever-advancing and truly path-breaking edge of the frontier from the millions of scientific papers published every year.

Science policy should be geared towards the facilitation of access and capitalising on the potential catalytic effects of frontier research in enhancing scientific progress. Providing open access to journals may partly achieve this goal. But discerning what constitutes frontier research requires skills that are hard to develop without guidance from leading scientists working at the forefront of scientific endeavour.

Personal contacts are particularly useful because face-to-face interactions are a superior way of transmitting ideas. High-quality doctoral programmes at universities where frontier research proliferates can therefore help to put young scientists on the most promising career paths. Even more established scientists can profit from short- and long- term visits at centres of science, and from attending high-quality conferences and research seminars.

Alessandro Iaria – University of Bristol
Alessandro Iaria is a lecturer in economics at the University of Bristol. He is an applied econometrician doing research on two main topics. First, methodological aspects of structural econometrics, as typically applied to industrial economics. Alessandro has been investigating several issues that commonly arise in the estimation of discrete choice models. Second, economics of science and innovation. Alessandro has been studying the path-breaking developments of the natural sciences in the 20th century and their impact on technological progress.

Carlo Schwarz – University  of Warwick
Carlo Schwarz is a doctoral student of the ESRC Centre for Competitive Advantage in the Global Economy (CAGE) at the University of Warwick. His research interests are in applied microeconomics, political economy and text analysis/machine learning.

Fabian Waldinger – LSE Management/CEP
Fabian Waldinger is associate professor of management at LSE’s department of management and a research associate at LSE’s Centre for Economic Performance’s labour markets programme. He obtained his PhD in the economics department at LSE in 2008 and worked in the economics department at the University of Warwick. He has held visiting positions at MIT Sloan School of Management, Harvard University, and the University of California at Berkeley. Fabian uses quasi-experiments to understand questions at the intersection of economics of innovation, economic history, and labour economics. In particular, he combines the collection of large data sets, often historical sources, with the use of modern micro-econometric techniques, to understand the driving forces of scientific productivity and the production and allocation of talent.