At the Supreme Court, women are more likely to be successful if they conform to stereotypes about their gender

At the Supreme Court, women are more likely to be successful if they conform to stereotypes about their gender

There are relatively few women among the attorneys arguing at the Supreme Court, despite the fact that nearly 40 percent of all practicing attorneys are women. Given that overt discrimination is widely discouraged, could implicit biases against women be a cause of this poor representation? In new research, Shane A. Gleason, Jennifer J. Jones, & Jessica Rae McBean examine the language used in documents attorneys file with the Supreme Court, finding that compliance with gender norms is linked to greater success for both men and women at the Court. They also find that the Supreme Court only enforces these gender norms when an opinion is written by a male justice.

In 1873 the Supreme Court upheld a state law which prohibited women from practicing law in Bradwell v. Illinois (1873). Explaining his reasoning, Justice Joseph P. Bradley argued, “[t]he natural and proper timidity and delicacy which belongs to the female sex evidently unfits it for many of the occupations of civil life.” Today, Bradwell is discredited and women make up nearly half of all recent law school graduates and nearly 40 percent of all practicing attorneys. However, women cluster near the bottom of the pyramid and few argue at the Supreme Court. This has consequences for how effective women can be at the highest court in the nation.

At the Supreme Court women make up less than 15 percent of all attorneys. On balance, they are less experienced and less successful than their male counterparts, even when statistically accounting for other predictors of attorney success. While we should expect more experienced attorneys to fare better, it is concerning if women are less successful simply because they are women. However, in an age where overt discrimination is widely and strongly condemned, bias toward women tends to manifest in more subtle and implicit ways. This of course raises concerns that women cannot stand on equal footing with their male counterparts at a Court deciding matters of grave national importance.

Implicit biases often reflect underlying assumptions and expectations about the characteristics and behaviors of a particular group of people. The norms of behavior we expect men and women to follow often reflect gender stereotypes, and one of the most enduring stereotypes about men and women concerns emotional expression. Men are expected to suppress outward expressions of emotions, while women are expected to outwardly express emotion. Compliance with gender norms shapes social perceptions and can have profound consequences. Thus, it is important to consider how gender norms shape perceptions at the Court.

While gender norms are present in everything from the way people dress to who holds the door for whom, we focus on language since language is ultimately at the heart of an attorney’s job. Gender norms in language dictate that men should be forceful and argumentative whereas women should be conciliatory and interpersonally warm. This expectation poses few problems for male attorneys; the norm of a good attorney aligns with the norm of a good man. But it creates problems for women since the norm of a good woman and a good attorney are at odds. In fact, the Court explicitly instructs women to avoid facts and emotion and instead focus on arguing legal theory. 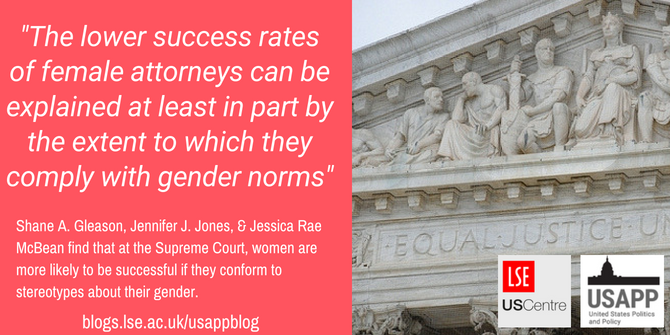 “Equal Justice Under Law” by Adam Fagen is licensed under CC BY NC SA 2.0

When women are in the minority, as they are at the Supreme Court, they tend to adopt the behaviors and practices of men to downplay their gender. It is therefore important to understand how the communication styles of female attorneys are affected by long-standing, masculine norms of communication at the Court. With so few women at the Court, their violation of gender norms is pronounced and readily noted by the justices. Since gender norms are enforced by decision-makers in a variety of social and political contexts, we suspect this might be part of the reason women are less successful than men at the Court.

Using software which extracts the level of emotional language found in legal documents attorneys file with the Court, we measure the extent to which male and female attorneys comply with gender norms. That is to say, we measure whether or not women argue “like women.” We then use this measure in a statistical model covering the 2010-2013 terms of the Supreme Court. We find female attorneys are more successful when they use language consistent with female gender norms. For their part, men are more successful when their language meshes with male gender norms.

We do find an important caveat, gender norms are only enforced by the Court when the Court’s opinion is written by a male justice. When the opinion is written by a female justice, gender norms play no role in shaping the success of attorneys. This underscores former President Obama and others’ appeals to make the judiciary more diverse so that it might open the legal process up to historically underrepresented groups. This process may be driven by the justice’s personal experiences; a recent study found that many female judges experienced a great deal of discrimination early in their judicial careers and thus may be sympathetic to the difficult balancing act of professional expectations which female attorneys face.

Our findings raise concerns about how truly blind justice is and how fully women can participate in the legal profession. Particularly in an era where President Trump is appointing the least diverse group of federal judges in a generation, the future composition of the bench may color the success of female attorneys for years to come.