This year’s midterm election cycle has seen an unprecedented number of women candidates running for Congress. But will this mean that 2018 will be a new “Year of the Woman”? Using a nationally diverse sample, Lindsey Cormack and Kristyn Karl find that –contradicting previous research – both women and men prefer female politicians, perceiving them to be more competent, intelligent, compassionate and sincere compared to their male counterparts. Specifically, Democratic men assess women politicians significantly more favorably than male politicians and are driving the effect among all men.

The last “Year of the Woman” was 1992 when women ran for (and won) dramatically increased representation in the US House and Senate. But the so-called “pink wave” in 2018 is poised to be even larger. This cycle, we’ve already seen a 67 percent jump in the number of women candidates running for the House and Senate compared to two years ago. In politics, women continue to be underrepresented at all levels of elected office. Yet the current primary season has given pundits and practitioners reason to suspect that times are changing.

Women like Alexandria Ocasio-Cortez and Ayanna Pressley have unseated established, incumbent men. And women of color have won elections in places where power has typically been held by white men, even when district demographics seem ripe to stifle voter enthusiasm.

Some urge caution in evaluating these elections as evidence of a sea change. Indeed, the “pink wave” is also very blue, as Democrats make up a large share of women candidates this cycle (as they have historically). But instead of attributing success to individual candidates or district conditions, we find evidence that the public may simply be ready for women to lead. At least that’s what our new experiment suggests.

How do we know that public attitudes towards women in politics are changing? In June 2018, we fielded a randomized survey experiment on a nationally diverse sample of more than 1,400 US citizens aged 18 and over. Using images of comparable, nondescript female and male politicians, we measured how voters reacted to different combinations of politician gender, policy domain, and emotional appeal.

Prior research has established that citizens associate female politicians with policy issues like education and social welfare programs and associate men with issues like defense policy and crime. Based on recent research, we anticipated that women who spoke about masculine issues would be considered less favorable, less competent, and be penalized in comparison to men who also spoke on defense policy. 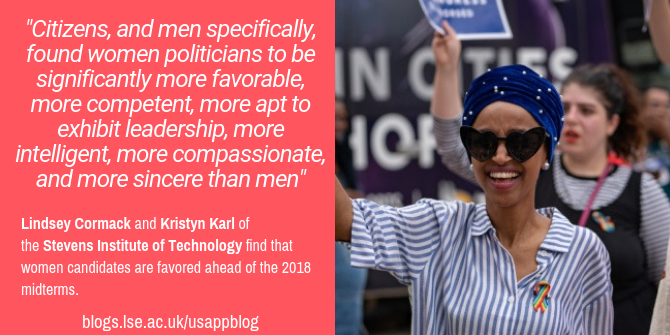 We also anticipated that men who spoke about traditionally feminine issues like education would not face the same degree of voter penalties. In other words, women (but not men) would face a penalty for violating gender norms.

In the end, our expectation was wrong; a simple finding persisted in each comparison and across multiple types of evaluation: people preferred female politicians. We found clear and consistent evidence that citizens’ assessments of the politicians’ general favorability, competence, leadership, intelligence, compassion, and sincerity (on a scale of 1-4, with 4 as most favorable) nearly always had the woman scoring significantly higher than the man.

Figure 1 below displays the averages (with 95 percent confidence intervals) for each evaluation according the gender of the candidate; we’ve zoomed into the 2-3 part of the scale as that’s where mean assessments are located. As is shown, across all six evaluations, women politicians are rated significantly higher than male politicians.

Figure 1 – Assessments by Politician Gender among All Respondents 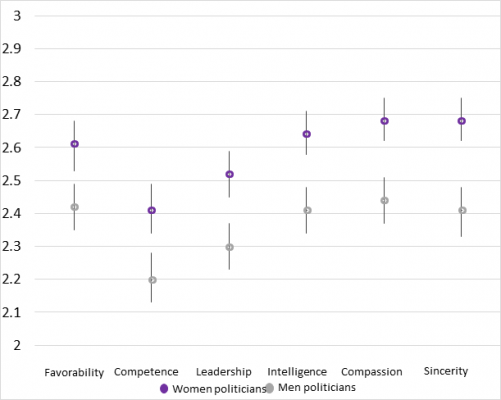 Importantly, our research shows that it is men, who repeatedly rate women politicians significantly higher. The same pattern did not emerge for women respondents (not shown). This result is surprising.

Figure 2 – Assessments by Politician Gender Among Male Respondents Only 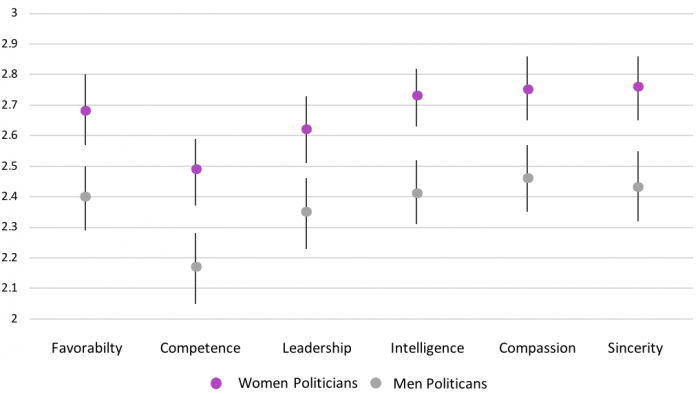 To be clear, the people who took our survey randomly saw either a man or a women politician. This makes the comparisons above relatively straight forward. Yet, differences in assessment of the politicians persist even when accounting for attitudes and demographics that are known to influence politician assessments, such as respondent age, educational attainment, issue topic, and emotional tone.

The excitement around more women running for office is not a one-sided, female-driven phenomenon. On the whole, citizens, and men specifically, found women politicians to be significantly more favorable, more competent, more apt to exhibit leadership, more intelligent, more compassionate, and more sincere than men.

What does this mean for November 6th? Our findings lend additional support to the conclusions drawn by simply counting the empirical wins and losses of men and women tracked by FiveThirtyEight over the primary season. They also offer a finer look into why PEW survey results indicate a majority of people think it’s a good thing for women to run for office.  And despite evidence of growth in the gender gap, our results suggest Democratic men might hold unique power in the voting booth.

If women are broadly considered more competent, intelligent, compassionate, sincere, and exhibit stronger leadership and have higher overall favorability (when all else is equal), it’s easy to see why those qualities would benefit our woefully frustrating political status quo.

Lindsey Cormack – Stevens Institute of Technology
Lindsey Cormack is an assistant professor of Political Science and Director of the Diplomacy Lab at Stevens Institute of Technology in Hoboken, New Jersey.  She recently authored the book, Congress and US Veterans: From the GI Bill to the VA Crisis which investigates the empirical differences between legislative efforts on behalf of veterans and lip service paid to veterans issues by members of the US Congress. She runs the digital database of all official Congress-to-constituent e-newsletters at www.dcinbox.com.

Kristyn Karl – Stevens Institute of Technology
Kristyn Karl is an assistant professor of Political Science at Stevens Institute of Technology in Hoboken, NJ. She is the Co-Principal Investigator of Reinventing Civil Defense, a project funded by the Carnegie Corporation of New York that seeks to develop and evaluate new tools for communicating with the public about nuclear risk. Her research focuses in the areas of political psychology and decision-making, communications and the media, and group attitudes.