The Great Recession which followed the 2008 financial crash saw massive increases in the number of homes being foreclosed and trillions wiped from homeowners’ equity. But the impact of the recession was not uniform across the country in all places. In new research, Timothy F. Welch, Steven R. Gehrke and Steven Farber look at the effects of access to public transport on house prices during the Great Recession. They find that houses less than a mile from stations in Atlanta, Baltimore or Portland all kept their value to a greater degree than those located farther away from stations.They suggest that this may be down to lower transport-related costs, better local economic conditions and greater access to employment opportunities.

The Great Recession was a disaster for homeowners. By 2012, US households had lost more than $7 trillion in home equity compared to early 2016; between 2007 and more than four million homes were subject to foreclosure. But not all housing markets were impacted equally by the worst downturn in 70 years and not all homeowners suffered in the same way. Studies suggest that the impact and rate of recovery varied across the nation.

Factors related to the condition of housing stock and the quality of nearby schools likely played important roles during the recovery. The role of built environment factors such as local access to fixed rail public transit, on the other hand, have been long theorized to impact housing value, but are less clearly understood in the context of a housing market crisis. There is little data which shows whether the market value of residences in areas which have good aspect to public transit depreciated at a slower rate prior to, exhibited greater stability during, and recovered at a faster rate after the Great Recession than similar types of housing with poorer access to public transit.

In our research, we constructed a housing price resilience index which we developed from a repeat sales analysis of all recorded single- and multifamily housing sales from 2002-13 in three American cities: Atlanta, Georgia; Baltimore, Maryland; and Portland, Oregon. Multiple recorded housing sales during the study period for a set of four submarkets defined as being located within distances of a quarter-mile, half-mile, one mile, and greater than one mile from a rail station were analyzed to measure the resiliency effects of fixed rail transit access on housing property values.

Atlanta, Baltimore, and Portland have grown under unique environmental and policy contexts, which have produced differing transit services and areas of coverage. With no natural boundaries, Atlanta routinely ranks amongst the most sprawling of US metropolitan areas. The region is served by 38 heavy rail stations spanning 48 miles of rail lines. Baltimore is the most compact and oldest of these three cities, but has suffered economic decline for several decades. Baltimore has 14 heavy rail stations on nearly 15 miles of track in addition to 33 light rail stations along about 29 miles of rail. Portland falls between Baltimore and Atlanta in terms of density, but has enforced an urban growth boundary for nearly four decades to help preserve it from urban sprawl conditions akin to Atlanta. Portland has a system of four light rail lines that serve 87 stations and span just under 54 miles.

Figure 1– Rail Station Proximity for Repeated Housing Sales Locations from 2002 to 2013 for Atlanta, Baltimore, and Portland

Using standardized scores of the repeat sales value for specific locations, we built a resilience index (R-Index), as a measure of house price stability. The index showed us how wildly prices in a certain type of area, in this case the level of transit access in a major American city, fluctuated from the rest of the city’s housing market. An index value closer to zero indicates that house prices tended to follow the city’s entire housing market deal from year to year. Values over one indicate the area outperformed the rest of the city’s  housing market, while values less than zero indicate house prices dropped at a rate faster than the market.

The R-Index for single- and multifamily housing in the three cities is shown in Figure 2 below. The x-axis, representing transaction year, should be looked at with three major broad market phases in mind: pre-recession (2002-06), recession (2006-11), and recovery (2011-13). As shown by our index, and market-based responses to changes in access to rail transit stations, the demand for single- and multifamily housing fluctuated significantly over this period. Compared to the entire market, housing in areas with better transit recovered value faster when compared to the entire market as shown by the general upward trend in R-Index after 2012.

Each city displayed unique patterns of housing price resilience across housing types and areas with different levels of access to transit. In Atlanta, nearly each transit area retained its value better during the recession than housing units with poor fixed-rail transit access. While no transit area reached its pre-recession housing values, multifamily units located between one-half and one mile from the nearest station nearly climbed back to 2002 values.

In Baltimore, single- and multifamily units in areas that were over one-half of a mile from a station appreciated faster and retained more value from 2002 to 2013. Properties within the quarter- to half-mile range had a lower level of price in stability, with market prices below those units in non-transit markets that ended slightly lower than pre-recession levels.

In Portland, single-family units located between one-half and one mile of a station were the only transit area to experience higher repeat sales values. In 2013, the R-Index for this submarket and those single-family housing units located within one-quarter of a mile from a rail station outperformed the non-transit area. Multifamily units located between one-quarter and one mile of a station retained their value better during the recession and continue to sell for higher values than multifamily housing units in other submarkets.

Housing sales values were more resilient for properties that had easy access to rail transit during the recent housing crisis. Throughout the downturn, properties located between one-quarter and one mile from a station, generally retained consistently higher sale prices compared to properties located over a mile from a rail station. In the 12-year study period, our repeat sales indices revealed that single- and multifamily homes located in non-transit submarkets consistently experienced falling values.

A number of factors likely contributed to the housing price trends we observed. Being near to a transit station may mean that homeowners don’t need to own a car, or at least their need for to use one for all of their travel. This subsequent reduction in transportation costs might permit prospective homebuyers to spend money they save on buying a car and costs like maintenance hip towards purchasing a similar home closer to a rail station. Lower monthly transportation costs associated with living near a station may also have reduced the travel-related budget of homeowners facing economic hardship. By reducing the cost burden of transportation, some households may have been able to better meet monthly housing costs and keep their home out of foreclosure.

The appeal of housing with access to fixed-rail transit combined with the investment effects of transit station locations and nearby employment opportunities may provide a healthier economic market in these places when compared to locations that aren’t close to transit station. While we did not explicitly account for these in our study’s design, a mixture of these and other factors are likely to have provided greater housing price resilience throughout the recent American housing crisis. Our findings show that rail transit access has made the housing market more resilient in Atlanta, Baltimore, and Portland.

Timothy F. Welch – Georgia Institute of Technology
Dr. Welch is an Assistant Professor of City and Regional Planning at the Georgia Institute of Technology. An expert in the field of transportation & land use policy, planning & forecasting and freight, he holds graduate degrees in law and urban planning. Welch is widely published, with a recent focus on issues related to transportation behavior, connectivity, equity and environment.

Steven Farber – University of Toronto Scarborough
Steven Farber is a transportation geographer and spatial analyst. His research investigates the social and economic outcomes of transportation and land use decision making in urban areas.  He is currently working on projects related to the distributional aspects of transit accessibility, personal mobility, and participation in the activities of daily life. 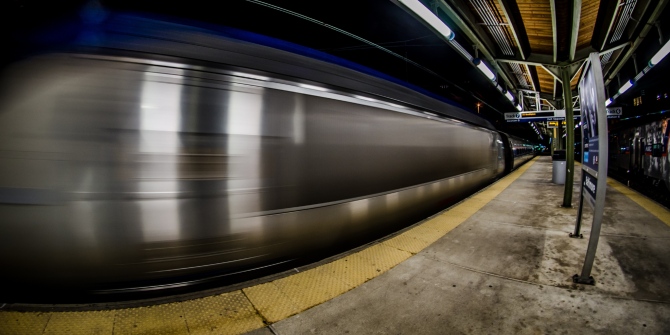