Has the legalization of cannabis in some parts of North America been a success? While some suggest that the jury is still out on that question, Daniel Bear argues that the drug’s legalization has largely been a good thing. Citing increasing tax revenues which have been allocated to health and education programs as well as falling violent crime in states which have legalized the drug, he writes that our judgments about cannabis should focus on these positive benefits rather than on the potential for negative impacts that have yet to –and may never – occur.

Recently on this blog, Wayne Hall wrote on the effects of legalized cannabis in North America, arguing that the, ‘jury is still out’ on whether legalization of cannabis has been a good thing. Hall’s analysis focused on issues of youth consumption, dependence, and the potential substitution of alcohol for cannabis. These are his areas of specialization and his assertions have no factual errors as far as I can tell. However, examining the issues not covered by Hall provides a more complete view of legalized cannabis in North America. When we take Hall’s assertion and incorporate the impact on crime rates, decrease in drug arrests, and other impacts the situation looks very different.

A Small Disagreement of Interpretation

A key element of Hall’s was the impact of legalization on youth consumption rates, and ensuing issues of cognitive development and dependence. But even he acknowledges that no increases in youth consumption have been observed. The only concerning statistic in this area is a reduction in how harmful young people perceived cannabis to be. In previous interviews Hall has stated that, “The perception that cannabis is a safe drug is a mistaken reaction to a past history of exaggeration of its health risks”. I can attest that as a child in the 80’s a DARE officer told me that heroin and cannabis were equally deadly and equally addictive.

Looking at the study Hall cites, the numbers seem to indicate that we are seeing young people more accurately identify the level of risk associated with cannabis consumption, and only a small percentage believe cannabis is harmless. The scare tactics of DARE did little to reduce drug consumption, and so perhaps more realistic assessments of cannabis’ harm, paired with better drug education, will help young people informed choices about whether or not to use drugs. While I don’t want to encourage young people to consume cannabis, I’d rather they be smart than scared.

The regulation of cannabis provides a new funding stream in the form of tax revenue and business revenue; money that would have gone to the black market. Colorado collected more than $247 million in cannabis tax revenue in 2017 from $1.5 billion in total sales. That money is not flowing to illegal growers, smugglers, and dealers who operate outside the law and often have to resort to violence if wronged in a transaction. The tax revenue has meant that each year $40 million more goes towards building new schools in Colorado, $6 million more goes to adding health professionals in to schools, and there are additional millions for mental health care, drug education, addiction support and other worthwhile programs. Colorado police services were recently allocated $21 million help them divert individuals with addiction and other mental health issues away from the criminal justice system. Low-level cannabis arrests make up a large percentage of most police services’ drugs work, and legalization means that officers can be redirected to more pressing community concerns. 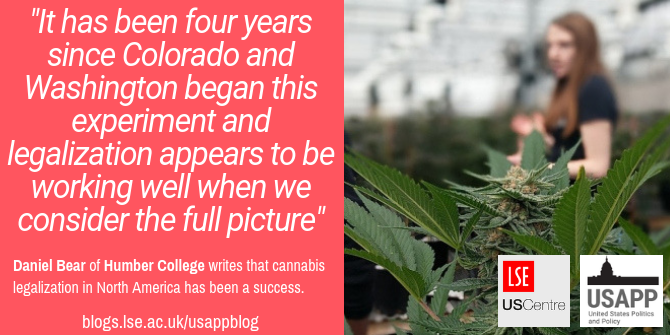 New research shows that there have been massive drops in the arrest rate for cannabis possession in the year following legalization in Colorado and Washington. These reductions were six times greater than the average reduction in the arrest rate in the decade preceding legalization. In 2004, UK-based research identified that a typical cannabis possession arrest takes five hours of an officer’s time, and the significant reduction in hours by police officers may be part of the reason why clearance rates for other types of crimes also improved after legalization.

Not only do drug arrests fall after legalization, but other crime numbers improve as well. Violent crime fell by 10 percent in Washington State after legalization. Research has also identified that crime rates in neighborhoods with retail cannabis stores see a localized drop crime rates due, in part, to the disruption of illicit drug markets.

Goldstein’s tripartite model may help explain this. Writing in 1985, Paul Goldstein found  that many of the deaths related to drug violence happened due to the prohibitionist system used to regulate drugs. What he called the ‘systemic model’ included violence perpetrated by gangs competing for territory and distribution pathways. When the market operates within the law the courts become the battlegrounds, not neighborhood street corners.

There may even be a benefit to housing prices, with retail cannabis laws leading to an estimated 6 percent increase in the value of homes by increasing demand in states that have legalized cannabis. While there has been some concern about illegal growing operations in Colorado that export their cannabis to other states, these are not part of the legal system and are the result of overly lax regulation that should not be a problem in Canada or other jurisdictions.

Hall is right to point out the potential impact of early cannabis use on developing brains, but the story of cannabis legalization is far broader than that. We can pursue effective, harm reduction focused drugs education to dissuade young people from problematic cannabis use as we simultaneously generate revenue to improve their educational experience and make their communities safer. Saying that the jury is still out on cannabis legalization makes it sound like we’re waiting for something to go wrong. But it has been four years since Colorado and Washington began this experiment and legalization appears to be working well when we consider the full picture.

The benefits of legalization are being felt far beyond the population that consumes cannabis. Legalization is creating economic opportunities, improved educational opportunities, and ending the unwarranted criminalization of tens of thousands of citizens each year for possession a drug that is arguably less harmful to the population than alcohol or tobacco. Legalization comes with new challenges, and old concerns, but when evaluated in its entirety, the evidence shows it is working pretty well.

Daniel Bear – Humber College
Dr. Daniel Bear is a Professor at Humber College’s School of Social and Community Services, where he teaches on the Criminal Justice degree. He has been working and researching in the field of drugs policy for 15 years. He has previously worked at the American Civil Liberties Union, conducted research for the Ministry of Justice in the UK, and has presented at international conferences across Europe, Australia, and North America. He obtained his PhD in Social Policy and Masters in Social Policy (Research) from The London School of Economics and Political Science.