Incumbent Democratic Senator Joe Manchin is favored to beat out his Republican challenger, Patrick Morrisey in West Virginia Senate race on November 6th. But, writes Matthew Jacobsmeier, in a state which has swung towards the Republican Party in recent years, victory for the Democrat – even one as conservative as Manchin – is far from certain.

West Virginia Senator Joe Manchin is a fairly popular Democrat hoping to be reelected in an election contest being held during a Republican presidency plagued by consistently low approval ratings.  An incumbent senator in such circumstances would typically be expected to secure an easy victory, especially given the well-documented tendency of the president’s party to lose seats in Congress in mid-term elections.

Yet while a win over Republican challenger and West Virginia Attorney General Patrick Morrisey seems likely – forecasters at fivethirtyeight.com give Manchin an 87.8 percent chance of being reelected – a victory is by no means certain.  Moreover, a Manchin loss would be devastating to Democrats’ hopes of regaining control of the US Senate.

Running against the wind

Prior to 2001, a Republican had not represented a single congressional district in West Virginia since 1983.  Democrats held both of the state’s senate seats from 1959 until 2015.  Yet by 2015, Manchin found himself the only Democratic member of a congressional delegation that had been comprised solely of Democrats only 14 years earlier.

Presidential voting in the state has taken similarly remarkable swing in the Republican direction.  While Democrat Bill Clinton won a comfortable 58 percent majority of the two-party vote in West Virginia in 1996, Republican Donald Trump won a whopping 72 percent of the state’s two-party vote in 2016, second only to the 76 percent that he garnered in Wyoming.

While leading in the polls, Manchin, who served as governor of West Virginia from 2005-2011, is clearly swimming against the state’s partisan and ideological tides.

Aiming for the center

According to DW-Nominate, a measure of congressional ideology widely used by political scientists, Manchin is currently the most conservative Democrat in the Senate.  While more liberal than any Republican senator, during his 2012 campaign, Manchin promised to cut federal spending, fight federal regulations, and protect gun rights.  He garnered national attention for a campaign advertisement that featured him using a rifle to shoot a hole through a copy of a bill that he argued would hurt the state’s coal industry.

Despite positioning himself far to the right of the typical Democratic senator, in the wake of the 2012 mass shooting at Sandy Hook Elementary School, Manchin co-sponsored a bill that would have expanded the categories of firearm purchases subject to mandatory background checks.  While this may have appealed to Democrats, the proposal caused the National Rifle Association to revise its rating of Manchin from an A to a D.

Even without the support of the NRA, Manchin again brought a gun to the fight in 2018, this time using a shotgun rather than a rifle in a campaign ad.  In the ad, Manchin shoots a copy of a lawsuit that has been joined by his opponent, Attorney General Morrisey.  Manchin contends that the suit, if successful, would remove insurance protections for people with pre-existing medical conditions.  While he had pledged to repeal “the bad parts of Obamacare” in 2012, Manchin cast critical votes against Republican proposals to repeal President Obama’s signature Affordable Care Act in 2017.

The passage of Obamacare was originally unpopular in West Virginia, but the state’s expansion of Medicaid under the program provided health insurance to roughly 160,000 West Virginians.  This development was particularly consequential given West Virginia’s poverty rate, which is among the highest in the nation.

Although West Virginia’s voters have clearly moved in the Republican direction over the last two decades, many seem to value the provisions of Obamacare related to Medicaid and pre-existing conditions, and Manchin has aggressively marketed himself as a protector of those provisions.  For his part, Patrick Morrisey has stated that while he wants to repeal Obamacare, he wants to replace it with a system that will maintain protection for citizens with preexisting conditions. 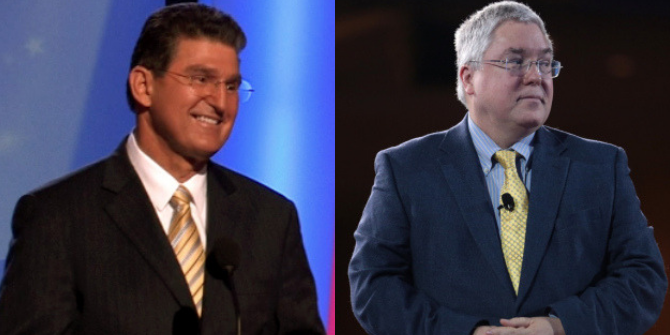 Issues related to healthcare have also played more personal roles in the Manchin and Morrisey campaigns.  Manchin’s daughter, Heather Bresch, serves as CEO of Mylan N.V., a pharmaceutical company that came under fire in 2016 for sharply raising prices on EpiPens, which are used to treat serious allergic reactions.  Manchin’s connection to Mylan has been highlighted in a pro-Morrisey television advertisement.

Meanwhile, Morrisey’s critics have highlighted the lobbying work that his wife did for prescription drug maker Cardinal Health.  Denise Henry Morrisey lobbied for Cardinal Health while West Virginia was involved in a lawsuit against the company for allegedly contributing to the state’s severe opioid addiction crisis and overdose epidemic.  Patrick Morrisey’s own work as a lobbyist for pharmaceutical companies prior to moving to West Virginia in 2006 has also been heavily scrutinized.

The relative recentness of Morrisey’s move to West Virginia – a move that occurred after a failed run for Congress in New Jersey 2000 – seems to be an important issue to some voters.  Many West Virginia residents feel the state is misunderstood or looked down upon by outsiders, and a sort of provincialism may play in Manchin’s favor as a result.  In contrast to Morrisey, Manchin was born and educated in West Virginia, has held elected office in the state since 1982, and is well-known state-wide.

Two developments add to the uncertainty regarding the outcome of the race.  First, President Donald Trump has endorsed Morrisey, and in one of the few states where Trump maintains a highly favorable approval margin, the potential effect of Trump’s support could be substantial.  While a pro-Morrisey “Trump bump” may already be accounted for by polls that give Manchin a comfortable lead, sustained campaigning by the president could alter the race.

Second, Manchin was the lone Democratic senator to cast a vote in favor of confirming Brett Kavanaugh’s highly contentious nomination to the US Supreme Court.  Manchin made his decision after Christine Blasey Ford testified under oath that Kavanaugh sexually assaulted her in 1982, a claim that Kavanaugh vehemently denied.  While Manchin’s vote, cast only after Kavanaugh’s confirmation seemed assured, seemed designed to appeal to Republicans and other conservatives, many West Virginia Democrats strongly condemned his vote and vowed to forego voting for Manchin in November.  The net effect of this particularly controversial vote remains to be seen.  It is likely, however, that the advantages of incumbency and his record as a moderate will carry Democrat Joe Manchin to a second term even in a strongly Republican West Virginia.