While considerable attention is being paid to the coming elections for the US House and Senate, November 6th will also see a number of important gubernatorial contests. Wendy E. Scattergood takes a deep dive into Wisconsin’s race for governor, where eight-year incumbent Republican Scott Walker, faces Democrat Tony Evers. She writes that while Walker has incumbency and the GOP’s typical midterm turnout advantage in his favor, he also faces a rising tide of dissatisfaction with President Trump and a potentially energized Democratic Party.

22,748. That’s the number of votes by which President Trump beat Hillary Clinton in the 2016 presidential election in Wisconsin. That’s 0.76 percent of all the votes cast in the state. It was also the first time since Ronald Reagan won the state in 1984 that the majority of the state voted for a Republican president. Fast forward to the 2018 midterm elections and we find that the Badger State again has one of the tightest races in the country, this time for governor. Scott Walker (R) is running for a third term against Tony Evers (D), the current Superintendent of Public Instruction.

So, what is going on in Wisconsin that makes these races so close that the state swings back and forth between Republican and Democratic majorities from election to election? To explain midterm elections, we need to look to factors like turnout, presidential-party midterm seat losses, and perception of the health of the economy.

As with most states, turnout rates in Wisconsin are significantly higher in presidential elections (67 percent in 2016) than they are in midterm elections (55 percent in 2014). Those less likely to vote in midterm elections are the young, lower income, minorities, and those less interested in politics. The first three groups in this list typically vote more Democratic than Republican, while the last group tend to swing and vote based on retrospection rather than prospection (they want to throw out whomever is in office when they feel threatened, or keep the status quo when they don’t). Thus, overall, Democrats generally have lower turnout than Republicans in midterm elections.

The president’s political party is likely to lose seats in Congress during midterm elections, which typically has an effect on statewide offices (or “down-ballot” races) as well. The rule of thumb in the last several midterm elections is that when there is a Democratic president, the Republicans will have a large turnout advantage, and when there is a Republican president, Democratic turnout reaches parity with Republican turnout.

Wisconsin’s swing towards the Republican Party

This combination of Republican advantage and presidential backlash in midterms explains some of the swing pattern seen in Wisconsin. Since 2008, the state has swung back and forth between Republican and Democratic majorities at both state-wide and state legislative levels, showing the impact of the dual phenomena of groups’ differing turnout rates and presidential coattail/backlash effects.

The question that people in Wisconsin are asking is whether a 2018 Blue Wave will look like the reverse of the Republican Wave of 2010 in the state. Most national prognosticators are saying that 2018 will buck the trend of Democrats only reaching turnout parity with Republicans in midterm elections and that Democratic turnout will far exceeds that of Republicans (though polling trends over the last week or so show that turnout gap may be getting narrower).

What the polls are saying about the race for Governor

In Wisconsin, the most recent Marquette University Law School poll (October 3-7, 2018) shows that 47 percent of respondents said they were going to vote for Walker while 46 percent said they would vote for the Democrat, Tony Evers. The poll found that Democrats were somewhat more enthusiastic about the election than Republicans, while Independents were significantly less enthusiastic than the partisans.

Trump’s approval rating in the poll was 46 percent. Republicans’ approval was 88 percent (9 percent disapproval) while the Democrats’ was 3 percent (97 percent disapproval). Among Independents, the approval rating was 42 percent and disapproval was 52 percent. This implies a large backlash coming from Democrats, and in a state where the numbers of Democrats and Republicans are so close, a slight enthusiasm advantage for Democrats as well as some backlash against the president from Independents and perhaps a few Republicans, could sway already tight races such as the governor’s and some key races in the state Senate to the Democratic side.

Governor Walker has been touting the state’s 3 percent unemployment rate and 5 percent yearly wage growth, making the case that he should remain the steward of the continued economic recovery. Fifty-four percent of registered voters in the Marquette poll think that the state is going in the right direction. This could mitigate some of the potential for any Blue Wave to impact on the governor’s race, particularly among Independents who tend to stick with the status quo when they perceive that the economy is going in the right direction.

One thing that could throw a small wrench in the impact of good economic news on peoples’ vote choice might be their perception of the Foxconn deal. The Taiwanese company, Foxconn, which builds LCD screens etc., for cellphones, most notably the iPhone, is building a plant outside of Milwaukee. To lure the company and its promise of up to 13,000 new manufacturing jobs, the Walker Administration negotiated and the state legislature approved a rolling package deal of up to $2.85 billion in incentives over a 15 year period should Foxconn deliver the number of jobs that it is proposing. According to the Marquette poll, 48 percent of registered voters do not think that the Foxconn plan is worth it compared to 38 percent who think it will provide at least as much value as was invested, though the majority do think it will help the Milwaukee area.

While the economy and jobs have declined in public opinion polls as the most important problem in the state, other issues have risen in importance. Not surprisingly, given that one of the candidates is the current Superintendent of Public Instruction and the traditional importance of education in Wisconsin culture, education funding has played a large role in this election. After a period of declining funding, the governor has recently increased spending for education. Evers, the Democratic challenger has been calling this an election ploy and argues that funding has not recovered to previous levels. In the Marquette poll, 57 percent prefer increasing spending on education to cutting property taxes.

Across the country, health care has been a prominent issue for Democrats in this election season. The Democratic candidate for Lieutenant Governor, Mandela Barnes, has been pushing hard on this issue in Wisconsin. He has argued that Governor Walker’s decision not to expand Medicaid with federal money has left thousands of low-income folks without access to the state’s version of it (Badgercare) and says the state should drop out of the lawsuit that is trying to get rid of the Affordable Care Act (ACA or Obamacare). Walker has argued since the start of the ACA that the Medicaid expansion’s federal funding is only temporary, that states would be on the hook after the funding expires. 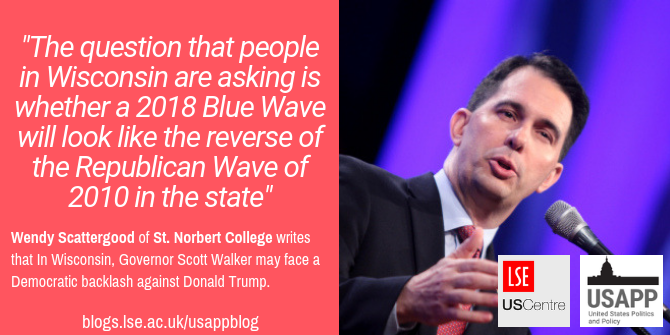 “Scott Walker” by Gage Skidmore is licensed under CC BY SA 2.0

What’s at Stake in this Election?

Where do all these factors, as well as others that have arisen during the election, put us in terms of understanding the Wisconsin governor’s race and the expected Blue Wave?

In a state with a recent history of extremely close elections and a governorship that has gone back and forth between Republicans and Democrats for decades, any of these factors causing even small perturbations in the turnout rate of one side over the other could sway the outcome of the race and is thus why Wisconsin remains one of the top governor’s races in the “too close to call” column.