More products are brought to market, even ones initially expected to fail, increasing consumer choice and welfare, write Luis Aguiar and Joel Waldfogel.

Digitisation, in the form of online retailing, has long been understood to deliver welfare benefit to consumers. Greater consumer access to content has led to an important work on the “long-tail” phenomenon: while the choice set faced by consumer was limited to the shelf-space available in brick-and-mortar stores before the advent of the Internet, consumers can now access and benefit from a much larger set of products online. Accessing this larger set of products would naturally amount to important benefits to consumers. Some research finds that the benefit consumers obtain from access to a long tail of additional varieties of books may be as high as $1.03 billion per year in 2000.

While online retailing has clearly benefited consumers by allowing sellers to carry a much larger choice of already-existing products, our work focuses on a different effect of digitisation. Technological change has sharply reduced the costs of production, distribution, and promotion in many industries, unleashing large numbers of new products. In the creative industries, digitisation has led to a radical increase in the number of songs, books, or movies brought to market. When an increase in the number of new products is combined with unpredictability of product success, which is a generic feature of new products and especially cultural products, then the effects of digitisation on the welfare of consumers can be much higher than the traditional long tail mechanism suggests.

The mechanism at work behind our idea is fairly simple. To illustrate it, suppose that the commercial success of a product were perfectly predictable at the time of release. In that case, an increase in the number of products released would provide consumers with new products that are, by definition, less appealing than the ones that were already available in the market. When commercial success is unpredictable, however, an investor would decide to release a new product based on its expectation of commercial success. In some cases, it will make accurate guesses and release products that end up being successful. But in other cases – perhaps most of them – the record label will make inaccurate guesses. In particular, it will sometimes decide not to release a product that would have been commercially successful. A lowering of production costs following digitisation therefore allows some of these products – which were initially expected to fail – to be released. This process – which we term the long tail in production – can lead to a significant increase in the appeal of newly released products and to substantial welfare benefits. 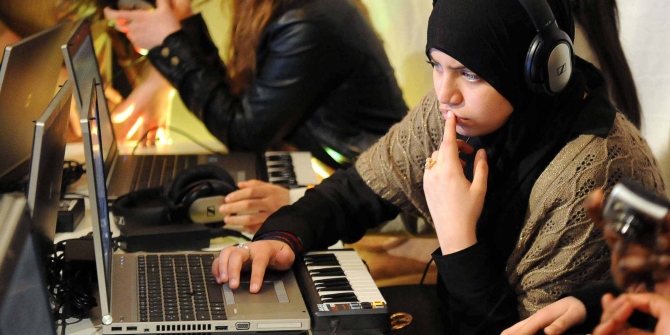 What are the welfare benefits from the introduction of new products in a market when commercial appeal is hard to predict? And how much larger are these benefits relative to the case where product success is perfectly predictable (the conventional long tail perspective)?

In our recent paper, we look at this particular question, using the digitisation of the music industry as our context. Technological change in the recorded music industry has allowed substantial growth in the number of new products. Between 2000 and 2008, the number of new songs available tripled, leading us to explore how this growth affects welfare under our long tail in production perspective in relation to the conventional view of the long tail.

Using data on digital music track sales in 17 countries in 2011, we estimate a model of music demand that allows us to construct estimates of the realised appeal – or commercial success – of each song that was brought to market. In order to measure the welfare benefit of a tripling in the number of products available, we can in turn compare welfare levels under two distinct scenarios. The first one is the status quo, which is the choice set faced by consumers after digitisation happened. The second one is a smaller choice set that includes the one third of new products that would have been brought to market in the absence of digitisation.

To determine which third of new products would have come to market without digitisation we develop a simple prediction model based on past artist success and other factors, and develop an entry model in which products enter in decreasing order of expected revenue. If commercial success were perfectly predictable, then the products entering absent digitisation would be the most successful products. In that case, the value of access to the new products would resemble the value of access to low-demand already-existing products of the sort sold online. In other words, it would be formally analogous to the conventional long tail.

Given the degree of unpredictability in our data – we can explain roughly a third of the variation in realised success using information available at the time of product release – the new products made available by digitisation add a great more welfare to consumers than do the least appealing two thirds of products.

Our results show that a tripling in the number of products according to expected quality adds nearly twenty times as much consumer surplus as a tripling of the choice set according to realised quality. While it is hard to know precisely how well industry participants can predict commercial appeal, our evidence – as well as evidence presented elsewhere – leads us to conclude that the random long tail is substantially larger than its conventional counterpart. In other words, measuring the benefits of digitisation from the perspective of the traditional long tail drastically underestimates the contribution of technological change to welfare. Interesting avenues of future research include the quantification of such benefits in other industries where quality unpredictability is prevalent.

Luis Aguiar – European Commission, Joint Research Center
Luis Aguiar is an economist and a research fellow at the European Commission’s Joint Research Center in Seville, Spain. His main research interests are empirical industrial organisation and the economics of digitisation, with a particular focus on the effects of technological change on firms, consumers, markets, and welfare.

Joel Waldfogel – University of Minnesota
Joel Waldfogel is the Frederick R. Kappel Chair in applied economics at the University of Minnesota’s Carlson School of Management. He has conducted empirical studies of price advertising, media markets, the operation of differentiated product markets, and issues related to digital products, including piracy, pricing, revenue sharing, and the effects of digitisation on the supply of new products. His book Digital Renaissance (Princeton University Press) will be released in November 2018.