It has been long argued that the US economy has a massive influence on elections. But the Democrats’ midterm successes in the face of a Republican administration presiding over a healthy economy may have called that commonly held view into question. Helen Thompson writes that this new apparent disconnect between the economy and voters’ preferences may be down to President Trump; after campaigning on the falsity of economic data in 2016, Americans are now unconvinced of his claims of a booming economy that may seem detached from their daily reality.

That economic conditions can have a large influence on the outcome of elections is generally agreed on by those who study politics. But despite this commonly held belief, what the state of the economy can and cannot actually explain about elections in the United States has become an analytically difficult question. In part this is a question of the conflicting stories that can be told from the economic data, especially the optimistic narrative generated by low and still falling unemployment at the same time as labour participation rates remain stubbornly low.

This dual-headed economy is also closely linked to the volatility of oil prices, which have long been important in American elections. In the space of the last few months ahead of this year’s mid-term elections oil prices first spiked sharply, prompting tweets from Trump demanding the Saudis lower them, only for them to have fallen considerably by polling day. The importance of the economy has also become a politically contested question around the 2016 presidential election with many analysts insisting that Trump’s success was little to do with economic issues and rested on the mobilisation of racial animus, whilst still others stressed Trump’s success in mobilising working class voters through his attacks on trade agreements and his victory the Rust Belt states that have experienced severe economic disruption through job losses in the manufacturing sector. If, where, and how the economy matters has become a much more complex issue than the mantra of Bill Clinton’s campaign in 1992 that ‘it’s the economy, stupid’.

The Democrats’ relative success in the mid-terms appears hard to explain in terms of the economy. Growth in the United States for the last two quarters is estimated at 4.2 and 3.5 per cent, respectively. The Democrats’ primary campaign message was about health care, an issue that has played a central part in ever mid-term election since 2010. The Democratic victories that gave the party control of the House of Representatives look largely demographic with the party securing higher voter turnout than Republicans and ensuring that its crucial constituencies, not least college-educated women, represented a larger share of the voters than was the case in 2014. The Democratic leadership has also struggled since 2016 to find a political message about the economy beyond the fact that Donald Trump should not be in charge of it.

Neither though is it evident that the apparent strength of the economy was much of an advantage for the Republicans. When it looked possible that the Democrats could conceivably win the Senate, the Republican campaign was saved by the overreach of the Democratic leadership during the Kavanaugh Supreme Court hearings. Trump himself made immigration central to his campaign and his narrative on this subject did less to tie the issue to a more general critique of American economic and political life than at least some of his rhetoric in 2016. 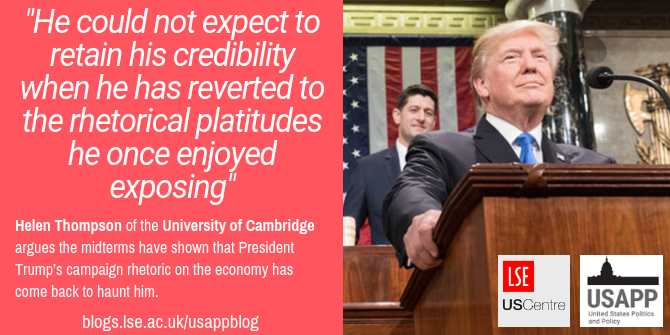 The most interesting results of the mid-terms came in the Rust Belt states that gave Trump his victory in 2016. In significant part the Democrats did well, reclaiming gubernatorial office in Kansas, Michigan, and Wisconsin and holding the Senate seats in Michigan, Ohio, Pennsylvania and Wisconsin, all states in which Clinton lost to Trump. Moreover, they did so, despite the fact that the manufacturing employment in the US is growing at a faster rate than any time since the mid-1990s, allowing Trump to claim that his promise to return manufacturing jobs has yielded actual economic change. The inability of the Republicans to build on Trump’s success in these states in 2016 may suggest that higher growth and the fall in the headline unemployment rate are not the political advantage that past experience would suggest. If the apparent economic improvement since 2016 translated politically, then we might expect the results to be particularly evident in the Rust Belt states, especially given previous manufacturing job losses.

One possible explanation of the absence of a pay-off for Trump in these states is that Trump has himself changed tack. Having campaigned as a candidate who charged that there was a sharp difference between the surface data about the American economy and the underlying reality, Trump is now as President taking the headline data, including the unemployment rate, not only at face value but as something about which to boast. The candidate who dismissed a rising stock market as ‘a big, fat, ugly bubble’ that disguised an underlying economic crisis has as President triumphantly tweeted ‘Highest Stock Market EVER’ and ‘That doesn’t just happen’. If Trump had political resonance in the Rust Belt in part because he played the part of a whistle blower on the hollowness of the post-2008 economic recovery for many Americans and the detachment of booming financial markets from ongoing economic realities, he could not expect to retain his credibility when he has reverted to the rhetorical platitudes he once enjoyed exposing.

Nonetheless, Trump has shifted the discourse about the US economy when it comes to trade and the US-China economic relationship. Of all the battles the Democratic leadership and the young Democrats seeking to push the party to the left want to fight with Trump, now the Democrats have wrestled back control over the House of Representatives, the trade war with China is not one of them.  Trump’s decision to confront China about its trade practices now has quite strong support across the political spectrum in Washington, even if his rhetoric is considered unnecessarily inflammatory. Indeed, the Democratic Senator, Sherrod Brown, who held onto his Senate seat in Ohio, despite much poorer Democratic performance in that state in other elections than elsewhere in the Rust Belt, has been a vocal support of Trump’s tariffs on China. In this respect Trump has taken the Democrats back to the political territory they occupied in Congress before the Obama years, whereby the Democratic leadership knew there was advantage to be gained from making the party responsive to the effects of trade, both good and bad, across the country’s states, cities and communities.

Yet whatever the partisan politics around the management of the economy is quite possible that the economic context of the 2020 presidential election will be decisively determined by the Federal Reserve Board and whether its planned monetary tightening allied to deteriorating conditions in Europe and Asia slows growth sufficiently to push the United States back into a recession. Trump’s lines of attack on the American central bank are clear, having already declaimed that the Federal Reserve Board chair whom he appointed, Jay Powell, is threatening what he says are the economic achievements of his administration. It might appear easy for the Democrats to counter that Trump is threatening the independence of the Federal Reserve Board. But high levels of household debt and an economy that has delivered an uneven recovery will make even moderately higher interest rates politically very unpopular. Where structural economic problems remain in place from the labor market to high debt, and where much that is economically consequential is settled by the monetary decisions of central banks outside democratic politics, the potential for further political disruption in the United States remains.

Helen Thompson – University of Cambridge
Helen Thompson is Professor of Political Economy. She has been at Cambridge since 1994 and is at present Deputy Head of the School of the Humanities and Social Sciences. Helen’s present work is focused on the historical origins of the post-2008 economic and political world and the crises it is generating for western countries. More particularly her recent work covers the political economy of oil, Brexit and the euro zone crisis.