This week at the G20 summit, President Trump announced that China had agreed that the export of synthetic opioids, namely Fentanyls, to the US would be curtailed. John Collins writes that the move is another political ‘sugar rush’ for the administration which is unlikely to address the US opioid crisis. Delving into the long history of US-China cooperation on drug policy, he finds that this latest announcement is yet another example of an unfocused measure aimed at reducing the flow of drugs into the US from China, and ignores and distracts from the needs of a more effective domestic response to the overdose crisis.

On December 1st the Trump administration announced that following talks between Presidents Trump and Xi Jinping at the G20 summit in Buenos Aires that China would begin to classify synthetic opioid drugs like fentanyl as controlled substances. This announcement follows a familiar pattern for a White House that appears more geared to policy sugar rushes than the complexities of actual policy fixes. As with the UN meeting in September where Trump announced an agreement to address the global drug issue this new measure should be read in terms of what it is not. It is not a radical shift in Chinese policy or a revolutionary breakthrough which will alter the course of the opioid epidemic. It is not an outcome which would have remained unrealised under a more conducive and cooperative form of drug relations by Chinese and US diplomats. Instead it follows a pattern of an administration that is unwilling, incapable or uninterested in utilising the traditional levers of US power projection to achieve its aims. This tendency towards inaction often leads to an artificial diplomatic crisis or inflection points which then prompt often marginal agreements which are then hailed as a breakthrough of unrivalled proportions.

The implications are twofold. First, the Trump administration has been pursing policy as theatre with a vigour which is orders of magnitude greater than how it pursues policy as problem solving. Second, the Trump administration is failing dreadfully in its drug policies at home and abroad and seeks temporary policy sugar rushes to paper over these deficiencies. Tens of thousands of Americans die from preventable overdose deaths every year with an incoherent and underwhelming federal response. More systematic scheduling by the Chinese government and a promise of more enforcement, laden itself with human rights risks, promises at best a marginal additional to a crisis that requires a whole of government response back in the US.

A century of attempts to control drugs at an international level

The failures of the US domestic drug policy agenda aside, the supply-side dimensions, and specifically how they relate to broader China-US relations deserve greater attention. In particular, to offer a real contextual understanding of the G20 announcement, we need to look at this latest announcement in the broader historical context of China-US relations on drug policy. The history of China-US drug policy can be traced as far back at the Opium Wars of the 1830s and 1850s, but perhaps more significantly, major international meetings in Shanghai and The Hague in 1909 and 1912 which gave rise to the international drug control system we have in place today.

When the US speaks of scheduling and controlling classes of substances, they are referring to ideas first attempted at an international level to control drugs at the turn of the 20th century. It was at a time when a potentially major US market, China, appeared to be collapsing and at risk of a European carve up, much like Africa in the 19th century. Within this context the issue of opium appeared to be a cause, symptom and opportunity for addressing the decline of the Qing dynasty and the descent of the empire into warlordism and civil war. Many, the Chinese in particular, viewed the opium trade as a proxy for European interference, but also as an existential problem for the country as well. Scholars have questioned the veracity of the notion of opium being the cause of China’s decline rather than a symptom, but as historian David Courtwright has highlighted, consumption was rising faster than population and, despite the Qing’s domestic prohibitions, they were viewed as unenforceable in a regional context where many imperial powers allowed some restricted trades in opium.

These issues fed in to the development of the fundamental principles of international drug control, enshrined in early treaties in the 1910s, 20s and 30s. These included that: opium uses should be restricted to “medical and scientific” ones; jurisdictions should not be allowed – and should prevent – the export of opium or its derivatives to areas that did not want to import it. Indeed a burden should be placed on exporting jurisdictions to prevent this; and that trade needed to be stringently regulated at the international level to ensure this and to prevent the “diversion” from a legal market for pain medicines, into an illicit one.

While states spent much of the coming century fighting over key implementation aspects and definitions, these principles became the bedrock of international drug control. Underpinning them was China’s experience, where an underregulated trade which began in India was seen as fuelling a domestic opium crisis. The failure of the Chinese state to check this, as exemplified by the Opium Wars, merely fuelled nationalist sentiments around the issue and made it more fraught. Meanwhile, China’s main and unwavering ally through this crisis and the attempts to internationalise controls was unquestionably the United States. Although the US had domestic motivations, including anti-immigrant sentiments and racism, which were driving its own moralistic drive against drugs, the China case tapped into nascent foreign policy interests around maintaining the “open door” to China and relieving some tensions with Chinese business and political elites which had derived from anti-immigration policies in the US.

The early beginnings of the War on Drugs

Over the following decades the US worked with and often against European nations to craft a series of treaties and regulations to “schedule”, “prohibit” and/or “control” the flow of “dangerous drugs” internationally. Again, China and the US aligned closely throughout right up to the Communist Revolution in 1949. The international system of Scheduling was born during this time, effectively ensuring that international agreement at the League of Nations and subsequently the United Nations, to list and control drugs based on an apparent assessment of the relationship between their harm and value. These mandates, that all states around the world impose uniform regulations, seemed to proponents as the key to winning this early drug war. Under this supply centric vision, drug problems were a result of excess and underregulated supply. Remove the supply and the demand would disappear, or so the logic went. What became apparent in the decades following World War II up to the 1980s and beyond was how woefully inadequate a supply-centric vision was to manage a complex global problem. Grudgingly member states of the UN moved towards an idea that drugs was both a supply and demand issue and now towards a more comprehensive, albeit deeply polarised and contested, understanding grounded in issues of  public health, harm reduction, treatment, social support, human rights and the ubiquitous and complex nature of much recreational drug use. 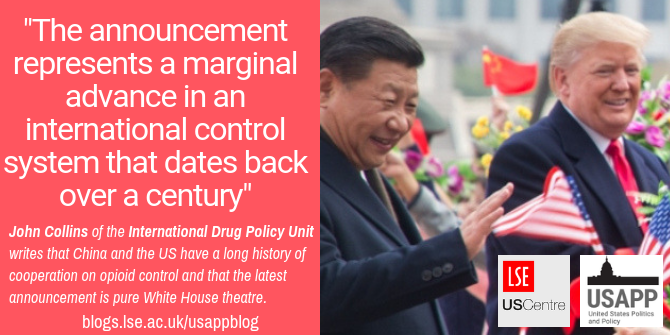 “President Trump’s Trip to Asia” by The White House is Public Domain.

In the meantime China-US relations split following the 1949 Revolution. Spotting a bureaucratic opportunity to align with anti-communist sentiments in Washington, the head of the Federal Bureau of Narcotics, Harry J. Anslinger, fabricated a plot by the People’s Republic of China to “flood the west” with opium to drain morale, currency reserves and anti-communist resolve. Even FBI Director J. Edgar Hoover pushed back on the idea as a fabrication, but it was one which subsequently took root in the US public’s imagination. The reality of opium production in Asia at the time was a more complex intersection between borderlands, insurgency, conflict and profiteering. At the same time as Ansligner’s accusations, Chairman Mao’s China was undertaking a brutally vigorous opium suppression campaign which helped push production out of China into Burma and ultimately reduced production and consumption in the country for decades. As with all suppression campaigns, it proved disruptive but ultimately short lived. As China opened to the world once again in the 1980s so too did its drug markets. Rising consumption and production of various substances was met with a traditionally repressive response, launching a multi-decade drug war that in many ways is still with us. Simultaneously the Chinese government has accepted key public health principles such as proven harm reduction interventions in order to reduce the transmission of diseases, particularly HIV and Hepatitis C. Nevertheless it retains an overtly conservative approach to drugs in UN forums which are increasingly challenged to demonstrate a commitment to broader UN principles of public health, sustainable development and human rights.

It’s about more than just controlling the drug trade

While the US softened its international war on drugs under the Obama Administration, China and the US ultimately remain key protagonists in an international control system which they both view as holding value to their national interests. In this sense, what unites the states is greater than what divides them at the international level. The breakdown in China-US drug relations appears in many ways symptomatic of the broader breakdown in China-US trade relations, driven by diplomatic choices in Washington to strain relations and focus on areas of conflict. China is understandably reticent to leave itself vulnerable to criticism in international forums, and most diplomatic analyses would conclude a conflictual, brow-beating approach to Beijing often proves counter-productive.

The sudden about-face of the Trump Administration following the G20 meeting this month seems to have more to do with paving the way for a cooling of trade tensions following a series of worrying economic trends in the US that many attribute to Trump’s trade wars. Ultimately the Administration’s announcement represents a marginal advance in an international control system that dates back over a century and of which the US, and indeed China, are generally viewed as key architects. The representation of this change as anything other than a short-term fix for a complex global problem that requires innovative and comprehensive policy approaches betrays more about the administration’s domestic predicaments and its poor grasp of the foreign policy levers of the US, than the actual outcomes we can expect from the policy. In the midst of a national overdose crisis that is a deeply troubling way to make policy.