Conspiracy theories rarely lead to violence; with the main exception being 2016’s Pizzagate which culminated in a gunman threatening a pizza restaurant which he believed was a front for a satanic paedophile ring. David G. Robertson and Asbjorn Dyrendal unpack some of the reasons why conspiracy theories such as Pizzagate can gain ground so rapidly, citing links to the “satanic panic” of the 1990s. They also point to links with wider apocalyptic narratives of right-wing conspiracist groups, narratives which are often also reflected in religion.

In November and December 2016, online accusations of a paedophile ring operating out of a Washington pizza restaurant, Comet Ping Pong, spread rapidly. This panic, now known as ‘Pizzagate’, began when leaked emails from Hillary Clinton’s campaign manager, John Podesta, were suggested to contain coded language by a number of users on web forums. These users began to elaborate on the narrative until it was widely taken as evidence of a nationwide satanic paedophile ring involving numerous politicians and other power brokers – even the Serbian performance artist Marina Abramovic.

Beginning on 4Chan and other niche sites, Pizzagate was picked up by larger conspiracist outlets – like Alex Jones’ Infowars – and made it to the mainstream media by late November. The peak was on December 4th, when Edgar Welch arrived at Comet Pizza armed with an automatic weapon. He was arrested after threatening staff and firing several shots in an apparent attempt to find underground holding cells and liberate “child sex slaves”.

It is rare is for an online conspiracy theory such as this to escalate into violence so quickly, especially one based upon such tenuous evidence. But writing as scholars of contemporary religion, Pizzagate is a perfect example of how our perspective and theoretical models can help to clarify the broader cultural currents which lead to such events. We argue that a number of ideas are shared by both religion and conspiracy theories, including belief, millennial or apocalyptic narratives, ideas about the paranormal, grand narratives, and claims of special knowledge. There are two things of particular interest to us. First, that Pizzagate was both a revival of the 1990s “satanic panic”, and second, that its exponential growth was the result of being able to tie contemporary political critique to a larger apocalyptic narrative held by many in the right wing conspiracist milieu.

Satanic Panic, which was widespread in the US, UK, Scandinavia, South Africa and the Near East in the mid- to late 1980s and 1990s, was intimately tied to a Manichaean (good vs. evil) understanding of the world promoted by certain evangelical millenarian Christians. It initially took the form of a generalized concern about the influence of horror movies and heavy metal music, and their links to Satanism. The fact that the Satanism of these accounts was largely imaginary didn’t stop this narrative from spreading through police departments, psychologists and policy makers, however. Like the promoters of Pizzagate-theories, they saw secret codes, symbols, and connections between popular culture, “Satanism”, and social problems, becoming increasingly semiotically aroused into reading clues into the problems of the world. By the late 1980s, this had enveloped and framed fears over child sexual abuse. The Satanism-frame was adopted by new activists, and developed into the Satanic Ritual Abuse (SRA) scare, in which (secret) groups of Satanists were claimed to be running organized paedophile rings, often on a huge scale and involving powerful individuals. Court cases including the McMartin Preschool trial (then the largest in US history), the Franklin Scandal and, in the UK, the Orkney Child Abuse case all centered around organized, and significantly, ritualized abuse. 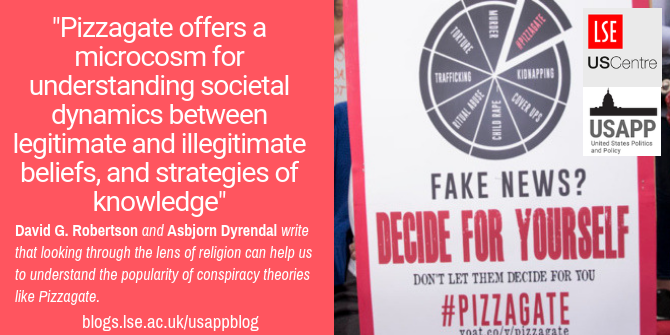 “”Pizzagate” conspiracy protest” by Blink O’fanaye is licensed under CC BY NC 2.0

None of these cases produced convictions. While the panic produced real victims when justice failed, official support for this narrative had collapsed by the mid-1990s as it became clear that the accusations were groundless. But for some conspiracy theorists and fundamentalist Christians of the cultic milieu, it never went away. These ideas were quickly incorporated into a sweeping millennial narrative in which a global (and sometimes cosmic) cabal of Luciferians seek to decimate the world’s population and enslave the remains. This narrative spread through the Militia movement in the 1990s off the back of William Milton Cooper’s Behold a Pale Horse (1991), and has been a mainstay of broadcaster Alex Jones’ work since he was still the doyen of the conspiracist milieu, and not infamous as The Man Who Put Trump in the White House™. The clearest expression is from his 2007 film, Endgame:

In the near future, Earth is dominated by a powerful world government. Once free nations are slaves to the will of a tiny elite. The dawn of a new dark age is upon mankind. Countries are a thing of the past; every form of independence is under attack, with the family and even the individual itself nearing extinction. Close to 80% of the world’s population has been eliminated… A Prison Planet dominated by a ruthless gang of control-freaks, whose power can never be challenged. This is the vision of the global elite, their goal: a program of total dehumanisation, where the science of tyranny is law. A worldwide control grid, designed to ensure the overlords’ monopoly of power for ever. Our species will be condemned to this nightmare future, unless the masses are awakened to the new world order master plan and mobilised to defeat it.

This is clearly intended to be prophetic, and indeed, prophecy is a vital tool for gaining legitimacy for conspiracist spokespeople like Alex Jones, David Icke, Henrik Palmgren and others. All conspirators must have a plan, so divining their endgame (or at least appearing to have done so) is to gain considerable respect and authority amongst likeminded groups in which traditional forms of expertise and authority are distrusted. And as with the Biblical Revelation, the apocalyptic vision of the future is actually a critique of present-day power. Those who make up the institutions of power are personified as evil in a language familiar to us for hundreds if not thousands of years, in witch trials and pogroms and crusades.

Pizzagate offers a microcosm for understanding societal dynamics between legitimate and illegitimate beliefs, and the strategies of knowledge which are employed in their increasingly polarised disputations – and the real-world consequences they lead to. The distrust of institutional authority in the conspiracist milieu leads to a profusion of ‘grand explanatory narratives’, which mix different beliefs and philosophies to make meaning and explain away the apparently anomalous or morally perplexing. A religious studies perspective not only clarifies the social function of such ideas, but offers tools for understanding the people who believe in conspiracy theories in a more human and productive light.

David G. Robertson – Open University
David G. Robertson is Lecturer in Religious Studies at the Open University. His work applies critical theory to the study of alternative and emerging religions, and to “conspiracy theory” narratives. He is the author of UFOs, the New Age and Conspiracy Theories: Millennial Conspiracism (Bloomsbury 2016) and co-editor of Handbook of Conspiracy Theory and Contemporary Religion (Brill 2018).

Asbjørn Dyrendal – Norwegian University of Science and Technology
Asbjørn Dyrendal is Professor in the History of Religion at the Norwegian University of Science and Technology. He has published widely on conspiracy beliefs and new religious movements, including the recently co-authored The Invention of Satanism (Oxford UP, 2016), and the co-edited Handbook of Conspiracy Theory and Contemporary Religion (Brill 2018).