In his election campaign, President Trump was able to win support by playing on many Americans’ concerns over immigration. In a new report, Sophia Gaston and Joseph Uscinski argue that this rhetoric has opened up new space for immigration related conspiracy theories, with as many as 55 percent of Americans now believing that the government is concealing the true costs of immigration to society, according to a new survey. They write that this new mainstreaming of conspiracy thinking poses grave risks to social cohesion and to citizens’ safety and security.

As a nation of immigrants, the United States has often been more consumed by questions of relations and power between groups within its society, than with the question of who comes and goes. Over recent years, however, as citizens’ concerns about status, representation and security have escalated, the political rhetoric on immigration in America has taken a level of ferocity and drama previously more often associated with Europe.

The election of President Trump marked a new phase for America’s debate on border control. His pledge to fund a wall with neighbouring Mexico and his depiction of illegal migrants as an existential threat to security, have imbued the public conversation about immigration with a more heightened sense of urgency. Critically, he has also positioned immigration policy as a fundamental issue of democracy, cementing a link in many citizens’ minds with their growing mistrust in institutions. This has opened up new space for the proliferation of conspiracy theories, which position the state as fundamentally complicit in undermining the concerns of many citizens.

President Trump himself has put forward or tacitly condoned a wide range of conspiracy theories about immigration, including suggesting that Mexico has been deliberately emigrating its criminals to the United States. Nonetheless, Trump’s messages have not emerged in a vacuum – rather reflecting the natural conclusion of years of proactive efforts and unforeseen consequences of political and policy choices on immigration, and their impact on public opinion.

A survey we have conducted with Ipsos for a new research report captures this climate of resentment, fear and mistrust. It finds that 55 per cent of Americans believe that their government is concealing the true cost of immigration to taxpayers and society, signalling that conspiracy thinking on this issue has well and truly become mainstream. This survey reveals a rather miserable point of cross-party consensus in an otherwise highly partisan climate, with 49 per cent of Democrats also perceiving that the costs of immigration are sufficiently high as to justify concealing them from public view.

We can observe that some of this widespread anxiety about the impact of immigration is related to concerns about the future of America’s white Christian identity, with 40 per cent of Americans agreeing with the statement, ‘In the last 20 years, the US Government has deliberately tried to make American society more ethnically diverse through its immigration policy’. 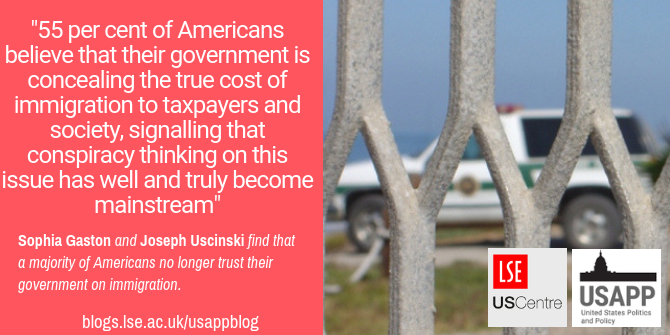 With the debate on immigration having taken on a highly emotive quality, 41 per cent of Americans also perceive that a conspiracy of silence has descended over both politicians and the media, punishing those who have spoken out in opposition. While 58 per cent of Republicans believe that those who have voiced concerns about immigration have been treated unfairly, a third of Democrats also agree with this view.

To compare and contrast these findings, we replicated this survey in the United Kingdom, finding that the considerably longer period of politicised debate on immigration has fostered an even more conspiratorial environment than in the United States. We also looked more deeply at the diversity of perspectives within states, choosing large, immigrant-rich and politically consequential Florida as a microcosm of a certain vision of a future American society. Even here, in a state both greatly enriched by and dependent on immigration, we found that 40 per cent of residents believe the government is concealing the true impacts of immigration.

Across the country, our surveys revealed that Republicans are generally the most conspiratorial about immigration, however between a third and half of Democrats consistently also shared the same views. The depth of widespread resonance amongst voters from all parties suggests that this issue will continue to play a prominent role in political campaigning and policy-making during the years ahead.

While there is clearly a spectrum of conspiratorial thinking on this issue, spanning scepticism to fully-fledged political paranoia, these findings are disturbing and speak to many potential dangers. In undermining trust in institutions and amplifying the sense of threat between groups, the proliferation and mainstreaming of conspiracy thinking poses grave risks to liberal democracies, to social cohesion, and to the safety and security of all citizens.

For politicians who wish to restore a more rational, evidence-based debate on immigration, and restore citizens’ faith in the social contract at the heart of our democracies, there will be no quick fixes to hand. Only through imbuing a greater level of transparency and effectiveness in immigration policy will the long road ahead to win back trust begin.