In Tyranny Comes Home: The Domestic Fate of U.S. Militarism, Christopher J. Coyne and Abigail R. Hall explore the ‘boomerang effect’ whereby what the United States sends out in the form of a militaristic foreign policy eventually comes to affect domestic institutions and policies. This is a masterful analysis, finds Courteney J. O’Connor, that will be of particular use to students and practitioners of foreign policy, international relations, intelligence studies and strategic studies.

Tyranny Comes Home: The Domestic Fate of U.S. Militarism is a masterpiece of analysis on the part of Christopher J. Coyne and Abigail R. Hall. The overall objective of the book is to discover how, and in what ways, a militaristic foreign policy eventually changes domestic institutions and policies in the United States of America. The framework they use for this process is the ‘boomerang effect’: essentially, what the United States sends out in the form of (coercive) foreign intervention does actually come to affect the domestic situation in the US, regardless of the time frame involved.

The text is split into two parts, with seven chapters overall. Part One, ‘Losing the Great Republic’, comprising Chapters One to Three, builds the context in which the book is set and the boomerang framework the authors use to illustrate the dangers of a militaristic foreign policy and tendencies toward coercive interventions. Part Two, ‘Cases of Domestic Liberty Lost’, comprised of Chapters Four through Seven, concerns the application and illustration of the boomerang framework to case studies: namely, surveillance; the militarisation of police; drones; and torture.

The United States has a peculiarly militarist and aggressively interventionist history, one which the authors use the words and ideas of Mark Twain to illustrate: according to Twain, ‘foreign intervention had real effects on the social fabric of America as the intervening country’ (1). The ‘boomerang effect’ described by Coyne and Hall is an illustrative method of understanding the cyclical process of how interventionist policies abroad will affect domestic government and (may) affect domestic civil liberties. The concept is that experimental social control mechanisms that are innovated for overseas application can be perfected while overseas, and will eventually be brought (consciously or unconsciously) back to the US. A crucial argument offered by the authors is that the militaristic foreign policy that drives coercive foreign intervention actually creates an environment in which the government operates under reduced constraints and oversight or accountability. This (usually) results in an expansion in the size and/or the scope of government and a citizenry that become more willing to accept these in the name of ‘security’ (5).

Contrary to the obvious conclusion that it is only the intervention itself that causes transformations in domestic policies and institutions, Coyne and Hall also identify the preparations for intervention as being just as responsible for the erosion of domestic liberties over time. In fact, the broadening scope and size of government powers domestically, influenced and reinforced by overseas intervention and the related innovation of ideas and technologies in combination with an institutionalised militarisation of politics and the economy, directly and negatively impact the liberties and freedoms that the government is supposed to protect. In order to limit that identified boomerang effect, the authors argue, it is necessary to curtail the American empire, and in order to do that, the ideology of the American citizenry needs to be antimilitarist (18).

This will not be an easy transformation to accomplish, given that the United States has a long and storied history of foreign intervention. Intervention also reinforces the domestic conditions that are conducive to the operation of the boomerang effect: namely, citizens’ fear (of the ‘other’) and the consolidation of state power (in pursuit of ‘security’) (21). Because drawing focus to international affairs, particularly those involving military security, is a means of unifying the domestic public in support of the government, ‘unquestioning support due to distraction from an external threat allows the government to consolidate its power relatively unchecked’ (27).

Coyne and Hall identify three methods through which social control mechanisms innovated during/for coercive foreign intervention can boomerang back on the United States: the human capital channel; the organisational dynamic channel; and the physical capital channel (30-42). Individuals who serve as members of the military during intervention learn skills and techniques that they then bring home with them; these individuals often go into careers like law enforcement or private security, wherein they are able to deploy those skills; and technologies innovated for overseas intervention eventually becomes utilised domestically. It is also worth noting that the boomerang effect is not temporally constrained: the effects are not often immediately apparent, but take a period of months to years to decades to be (readily) observable.

Part Two of the text concerns different cases in which social control mechanisms boomeranged back to the United States. The first of these cases deals particularly with the control mechanisms associated with surveillance. In general, members of the early iterations of intelligence communities in the United States also employed skills picked up during military postings to contribute to the growing ‘national security state’. The militarisation of the police was a particularly gruelling chapter, as many of the lessons that Coyne and Hall draw from the American intervention in the Philippines during the early twentieth century are clear in the modern policing strategies of the United States today. Particularly, the authors outline precise examples of how the veterans of the Philippines intervention transformed the structure of national police departments and influenced policy that did in fact set the stage for the current militarised (and continuously militarising) modern police (101).

The uptake and diffusion of innovative technologies have also tended to make violence more efficient, and because the ‘War on Drugs’ and the ‘War on Terror’ have both increased the pool of potential suspects to include America citizens, overall the government has ‘both the opportunity and the incentive to expand the scope of its activities’ (108). Drones are a particular form of technology that are most famous due to their use in war zones, but they are increasingly being used by the domestic agencies of the United States as tools of surveillance at home. Because of the array of drones available and the general fact that they are difficult (if not impossible) to detect, the rights of citizens can be (and are being) violated without their knowledge.

Possibly the most confronting chapter was that which concerned torture, and the methods of this that were innovated and perfected by Americans during coercive foreign intervention before finding their way back to the United States and into police departments. One of the cases analysed examines the journey of one particular soldier who, upon return to the US, was employed by the Chicago Police Department and openly implemented torture such as ‘the Vietnam Special’ (166).

The authors conclude that in order to reclaim what they call the Great Republic (of the United States of America), there needs to be a conscious de-institutionalisation of militarism in both the ideology and the foreign policy of the American people and government. The continuous preparation for intervention and actual intervention are reinforcing militaristic structures that are eroding domestic liberties through the boomerang effect through which social control mechanisms can be examined. In closing, Coyne and Hall state that ‘a commitment to liberty requires rejecting the potential benefits of intervention precisely because it can erode liberty’ (179), and given the evidence to support the contention that a militaristic foreign policy does erode domestic liberties, this can only be considered a truism. This was an excellent expository text that I do believe was one of the most educational I have read in some time, and I thoroughly recommend it to students and practitioners of foreign policy, international relations, intelligence studies and strategic studies. 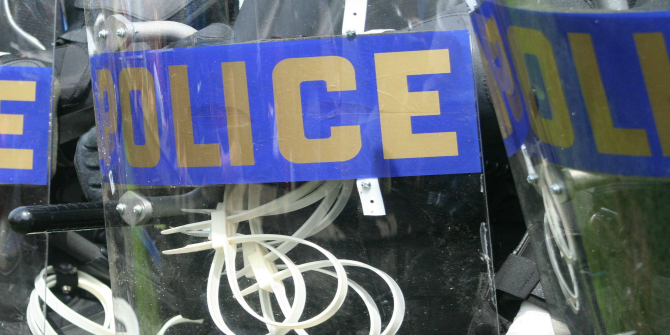