In Winners Take All: The Elite Charade of Changing the World, Anand Giridharadas explores and unpacks various myths regarding the role of elites in engendering social change, showing how the efforts of America’s elite to ‘do good’ typically help to maintain their advantaged positions. This is an eloquently delivered yet scathing critique of the emphasis placed upon elites over social institutions in challenging inequality, finds Louise Russell-Prywata.

Winners Take All: The Elite Charade of Changing the World. Anand Giridharadas. Alfred A Knopf. 2018. 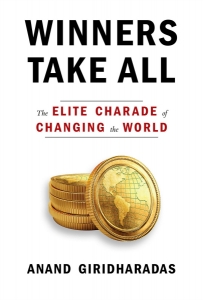 Winners Take All is billed as a showcase of various myths about the role of elites in social change. By unmasking these, journalist and political analyst Anand Giridharadas hopes to help people see alternative routes to true, fundamental change.

I read this book interested to hear how the efforts of America’s elite to ‘do good’ also help to maintain their own advantaged positions. By my reading the book certainly delivers, but also covers so much more: it is an eloquently delivered yet scathing critique of the culture and ideas that have grown up around neoliberal politics, globally-oriented US business and Silicon Valley’s tech disruptors in particular.

The book begins by outlining three common ways of understanding the role of philanthropy: first, the view that there are so many troubles in the world, we should be glad that the wealthy are helping; second, the idea that elite philanthropy is well-meaning but inadequate as ‘it treats symptoms, not root causes; it does not change the fundamentals of what ails us’ (7). Third, Giridharadas outlines a more sinister view of philanthropy, in which the help of elites ‘not only fails to make things better, but also serves to keep things as they are’ (7).

Throughout the book Giridharadas knits together a series of interviews with an impressive roll call of the US philanthropy elite – including Bill Clinton and Ford Foundation President Darren Walker – to argue that, sinister or not, philanthropy is not a socially positive disruptive force that can fundamentally challenge the status quo. Rather, he paints a subtler picture of well-intentioned individuals, many of whom may want to change the fundamentals, but who are so indoctrinated in the dominant worldviews propelled by businesses that their efforts to change the status quo are somewhat doomed. 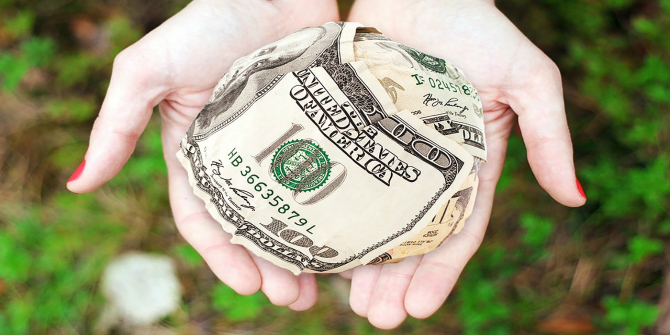 Central to Giridharadas’ thesis is the concept of ‘MarketWorld’, which he describes as ‘an ascendant power elite that is defined by the concurrent drives to do well and do good, to change the world while also profiting from the status quo […] MarketWorld is a network and community, it is also a culture and state of mind’ (30). Having established this concept, he goes on to the next element of his thesis: the notion that capitalist activity can be both personally profitable and socially beneficial – he dubs this ‘win-win-ism’.

The subsequent chapters elaborate on these concepts to highlight how ‘win-win-ism’ is embedded into elite philanthropists’ thinking and approaches, first analysing the philanthropy of Shervin Pishevar, an early investor in Airbnb and Uber, before panning out to show the same win-win approach operating within his companies. Giridharadas diagnoses a central problem which touches on the crises of democracy and inequality that characterise Western societies in recent years: in promoting win-win approaches to business and philanthropy, these elites entirely neglect to acknowledge their own power.

With this critique established, Giridharadas then takes on another feature of our times: the rise of the ‘thought leader’ and the concurrent fall in the standing of public intellectuals and academic experts. Connecting this to his argument that elites do not want to confront their own power, he creates an analysis of thought leaders as the epitome of win-win-ism, promoting the new without challenging the old. This contrasts, he argues, with the intellectual criticism found in academia that elites may find less palatable.

Giridharadas presents some interesting case studies, and whilst the juxtaposition is undoubtedly a generalisation, he cleverly uses it to talk about complex cultural processes that construct and retell philosophies, and define what people think social change is. He argues that the rise of the thought leader is tantamount to ‘the plutocratic funding of ideas’ – where highly paid thought leaders deliver innovative, yet not particularly system-challenging ideas on an elite speaking circuit, often at the expense of corporate elites.

Throughout the book, Giridharadas fundamentally and explicitly challenges the idea that business tools are best for solving the non-business problems of systemic social change. Yes, it’s anti-neoliberal, but it goes much further than this; he takes issue with the very culture that neoliberal business models have helped establish and proliferate. His analysis won’t make palatable reading for some: he compares this belief in the power of market logic to a faith, one that people are held by but are not always fully aware of how much they believe.

His thesis is pertinent in our times of rising inequality. He articulates the challenge that elite philanthropy increasingly faces, quoting Bruno Giussani, the global curator of TED:

Poverty is essentially a question that you can address via charity […] But inequality […] is about how you make the money that you’re giving back in the first place (122-23).

Giridharadas brings home the point further, stating that ‘to fight inequality means to change the system. For a privileged person, it means to look into one’s own privilege’ (123).

The volume is clear, razor-sharp and satisfying to read; however, Giridharadas does implicitly talk about US ‘elites’ as something of a single category. Similarly, he refers to ‘MarketWorlders’ thoughout; I find the concept easy to relate to in the worldview he describes, but question how varied the sectors are that he attaches the label to – high finance, tech and manufacturing have rather different business cultures. Although he makes a good case for a shared underlying assumption of ‘business tools are good tools to do good’, I expect readers from these sectors might feel a touch indignant at being lumped together.

Giridharadas perhaps could have done more to counter the implicit notion that elites are acting in conscious coordination to promote their own interest. Over more pages, he might have explored how elites preserving their own status arises as a result of their position within the system, and is fundamentally a property of the system rather than driven by individual behaviours or shortcomings.

His conclusions appear in line with this concept. In the final chapter, he reflects on the changing political winds of recent years and ends with a call to strengthen public institutions. This, he argues, is the way out from deeper entrenching plutocracy: stronger public institutions, not well-meaning elites, are the mechanism through which actions for the benefit of all citizens should be enacted.

My personal takeaway from this book is its thinly veiled warning for pragmatists who aspire to do good from within the systems that they seek to change: group think erodes ideals, and as the pragmatist seeks to advance their careers and reach positions in which they can ‘do more good’, they need to remain constantly watchful that their vision of what ‘doing good’ is does not become co-opted by the very systemic issues that they set out trying to change.