There is a massive class and race-based chasm in digital activism.

There is a massive class and race-based chasm in digital activism.

A great deal of research and commentary about online spaces focuses on who consumes online content and how. But what about those who are producing content online? In new research, Jen Schradie looks at activism in North Carolina around labor laws, and finds that middle and upper class groups are much more likely to be digital activists, while working class – and predominantly African American – groups are not using online spaces for activism as much. She writes that not only do most working-class activists simply not have the time to be online, but they also frequently do not feel empowered to use online spaces for activism, an issue which can be made worse by fears about retaliation from employers.

When I started my research project on digital activism, I expected to find some socioeconomic inequality. But even I, a digital inequality scholar, was shocked at just how much.

My research focuses broadly on “digital democracy,” as in what in the heck that means and how accurate it is. Is the internet really a pluralist space? In 2006, Time Magazine named “You” the person of the year, as in everyone could participate in the new digital public sphere, especially with the social media platforms launching at the time. But I wanted to know who that “You” was, exactly. I ended up conducting a variety of studies where I went beyond the contemporary digital divide scholarship which tended to focus on who was able to access the internet, or consuming online content. I was interested in who was producing that content. More than seven years ago, I analyzed survey data in the United States; I found an extensive digital production gap. While age was certainly in play, one of the most persistent factors over time was socioeconomic status, primarily educational level, as well as income. People with a college education were often twice as likely to post online content across 10 internet activities.

While mapping this basic digital difference showed just one of the limitations of digital democracy claims, five years later another round of participatory euphoria rang out. This time, Time magazine celebrated the activist – often armed with digital tools – as their person of the year in 2011. The online participatory hype was focused on large-scale and digitally visible protest actions, such as the Arab Spring or Occupy Wall Street. But I wanted to know how everyday activists were using the internet for their political activities. So I looked at one political issue around which a variety of groups organized. In this way, I was able to harness variation – not only with social class differences but also ideological ones, as well.

I examined the groups who were supporting or opposing the labor rights issue of collective bargaining for public employees in one American state, North Carolina. There are a handful of US states in which public workers – from teachers to firefighters – are not able to have a union contract. North Carolina conservative organizations, such as Tea Parties or think tanks, wanted to keep this ban in place while progressive groups, like civil rights or labor unions, wanted to overturn it.

This was an ideal issue, not only because it was contentious and attracted groups across the ideological spectrum, but I also could compare groups from different social classes. While it may seem like this labor issue was old-school and attracted only older organizations and activists, it turned out that the age of the groups – and people themselves – also varied, from college students to senior citizens. This diversity of activists resulted from how this hot-button issue was not seen as a narrow union topic but more as a social movement issue, largely due to the lack of unions in the southern US.

I found 34 groups in this political arena organized around this issue, and I created a digital activism score for each group based on their website, Facebook and Twitter use. The score not only captured what the groups themselves created but also how (and how much) people participated with them online. In my research, I show that middle/upper-class groups not only developed these platforms more than their working-class counterparts, but they also had heightened online participation, as well. In fact, out of the over 60,000 Tweets that these groups had posted during the course of the study, only one came from a working-class group, which was statistically zero. 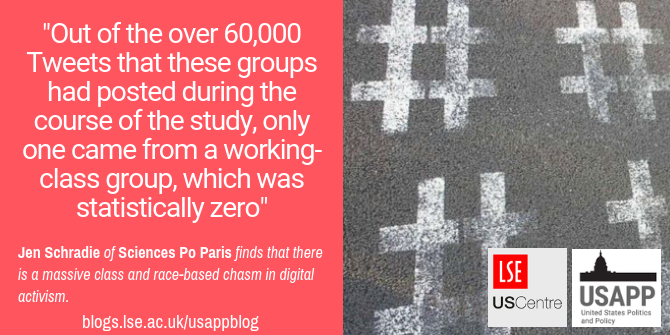 But I also wanted to know why these predominantly African American working-class groups were not harnessing the power of the internet. I spent time interviewing folks, as well as attending meetings, events, and observing their everyday digital use (or lack thereof). The usual suspect of resources was prevalent, neither the groups nor individual activists always had functioning computers or smart phones. The lack of skills was also a factor, both among the staff and for people to keep up with the latest social media platforms’ functions. But there were other more profound reasons why some activists had not taken up digital activism.

First, many working-class activists simply didn’t have the time to be online. While some may begrudge all of the time spent in front of computers and phones or perhaps may find social media addictive and want to take breaks from it, some people simply are not able to be online 24/7, even if they do own a smartphone with an affordable data plan (which is not always the case). Some activists I talked to had to surrender their phones when they clocked into work, or they were working two or three jobs to make ends meet and didn’t have time to post, comment or like.

In addition, working-class activists would often tell me that computers or social media were for “other” people. Many simply didn’t feel empowered to post on Twitter, for instance. It was “too fast.” While this certainly was related to skills, it was also something more. Some of these disempowerment responses were from people who had html training or knew their way around the internet, yet they still frequently said, “I’m not a computer person.”

Finally, some black working-class activists were afraid to participate in online conversations about their work-place struggles. Once they had started to try to organize a union, some university janitorial workers had found nooses at work, reminiscent of lynching. Fearing retaliation, either of physical violence or of losing their jobs, online activism was too much of an individualized, rather than collectivized, action for them. So they didn’t feel as protected by the internet as by the community, religious or labor groups they were a part of, and these organizations weren’t online themselves, so the digital activism gap just perpetuated itself. Simply, for many it felt threatening, especially in this region of the United States, the Black Belt South, which is a former slave-holding area with a significant African American population.

Yet the middle to upper class groups had staff or members who had much more confidence, time, skills and resources to be active online, especially older white Tea Party and other patriot activists.

A common assumption is that the costs of collective action are lower in the digital era – people no longer need to come to meetings or send out expensive newsletters. But I found that not only were these cost reductions not evenly distributed across groups but that for some, costs were even higher in the internet era. Resources and risk were just some of the obstacles to participate online in what may seem so simple or seamless for others.

Jen Schradie – Sciences Po Paris, Observatoire Sociologique du Changement
Jen Schradie is an Assistant Professor at the Observatoire sociologique du changement (OSC) at Sciences Po in Paris. Her broad research agenda is to interrogate digital democracy claims with empirical data. Despite recent panic about digital threats to democracy, many theorists have still suggested that the Internet can enable a more participatory, pluralist society, but her research challenges these claims, spanning three areas: the digital divide, digital activism, and digital labor. She has found that inequalities, ideologies, and institutions shape participation in our new information society.