In the face of the longest government shutdown on record, President Trump has suggested that he might declare a state of national emergency in order to construct a border wall on the US-Mexico border. Joshua Kennedy writes that while there seems to be little that could prevent President Trump from declaring a national emergency, even if Congress did not stand in his way, any action he took to actually build the wall would likely face a stiff challenge from the courts.

As we near the two-year mark of Donald Trump’s administration, the President continues to find himself vexed by an inability to deliver on what was arguably his most prominent campaign promise: to build a wall along the southern border between the United States and Mexico in an attempt to cut down rates of illegal immigration. His most recent gambit was to allow the government to shut down rather than sign any appropriations bills that do not include funds for building the wall. As negotiations continue to make little headway, President Trump has floated the idea of declaring a national emergency as a means of getting around Congress on this issue. Is this a legitimate strategy, and how likely is it to succeed?

To begin, it is worth visiting national emergency procedure as it is currently practiced in the United States. Until the 1970s, there was little guidance in the way in which presidents could declare an emergency and what authority could be exercised thereunder. Concerns about broad government malice and corruption in the wake of Vietnam, Watergate, and other matters incentivized Congress to attempt to rein in presidential use of national emergencies for policy-making purposes. In 1976, Congress passed the National Emergencies Act, which expressly authorizes the President to declare emergencies, but provides no guidance as to what constitutes such an emergency. Further, it requires that “no powers or authorities made available by statute for use in the event of an emergency shall be exercised unless and until the President specifies the provisions of law under which he proposes that he or other officers will act”. The emergency can be terminated either at the discretion of the President or by joint resolution of Congress, though any such resolution would be subject to presidential approval or veto as a matter of course. 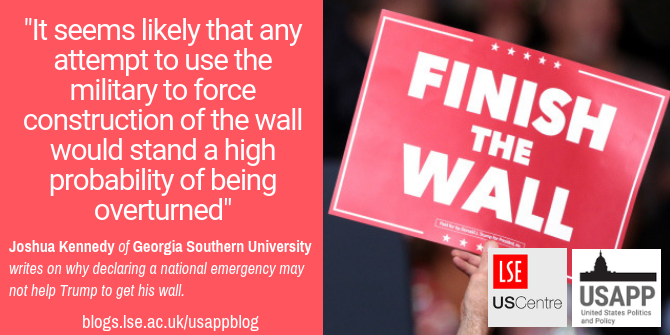 While there are no set standards for what is or is not a national emergency; the provisions of the Act requiring that presidents explicitly cite the authority they intend to use are intended to serve as a robust check on unilateral action. Of course, the extent to which such a check is effective depends in large measure on Congress’s willingness to assert itself, and as Andrew Rudalevige notes, on emergencies and other presidential exercises, Congress has not been eager to engage in such assertiveness.

So yes, President Trump could certainly declare a national emergency with respect to the so-called border crisis, but to exercise any authority to actually build the wall would require a clear citation of which law he would be using. It is unclear to which legislation he would turn, but he has options, and given that Trump has played up national security issues as a reason for securing the border, a likely candidate for statutory authority is the Military Construction Codification Act of 1982. The law allows, under conditions of a national emergency, that the Defense Department “may undertake military construction projects…not otherwise authorized by law,” provided that “use of the armed forces” is necessary under the conditions of the emergency.

The rub, of course, is who determines what constitutes necessary use. Congress could end such a declaration by join resolution, but given that the Senate is controlled by Republicans and that, even if it were not, it would be exceedingly difficult to overturn an expected presidential veto means that this is an unlikely prospect. Democrats in the House would at the very least probably vote to overturn the declaration as a symbolic gesture if nothing else, but the likeliest place the President would run into serious problems with implementation would be in the courts. Though presidents have been given wide latitude when it comes to emergency declarations (much of that latitude freely and happily given over by Congress), the courts have shown a willingness to rein in these powers under the right circumstances, perhaps most famously in the Supreme Court’s decision in Youngstown Sheet & Tube Co. v. Sawyer in 1952 which nullified President Truman’s seizure of privately-owned steel mills under conditions of a national emergency. The administration might find it difficult to argue in court that the wall constitutes a serious crisis that demands usage of emergency powers when the President has already admitted that he will only turn to this tactic if he does not receive cooperation from Congress.

Theoretically, President Trump’s plan could work, but practically, success would depend upon convincing the judges of whichever federal courts in which a challenge would be heard that it does not contravene existing law. Given the administration’s struggles in having the judiciary ratify and uphold its actions, it seems likely that any attempt to use the military to force construction of the wall would stand a high probability of being overturned. But as the election and presidency of Donald Trump have reminded scholars, the unexpected can and does occur in American politics.