In the South, it’s not just state politicians who work against federal policies. It’s the bureaucrats too.

In the South, it’s not just state politicians who work against federal policies. It’s the bureaucrats too.

The debate over states’ rights in the US is as old as the country itself. In the American South, many politicians still reject the federal government’s rules and regulations. In new research, Nicholas G. Napolio and Jordan Carr Peterson find that this resistance applies not only to well-publicized issues such as race relations and healthcare policies but also to relatively minor matters like utility policies and that these disagreements extend to state-level bureaucrats as well.

“[W]e will tolerate their boot in our face no longer…and let those certain judges put that in their opium pipe of power and smoke it for what it is worth,” thundered George Wallace from the dais during his 1963 gubernatorial Inaugural Address. Ascending to the Alabama statehouse, Wallace stoked more than a century of Southern resentment toward federal control – this time the overturning of state segregation laws by the Supreme Court – calling for “segregation now, segregation tomorrow, and segregation forever.”

Decades later, scholars continue to observe the exceptional strand of Southern resistance to federal policy, from race relations to health care. The high importance of racial politics and health care understandably leads to considerable policy disagreements. But might examining less notable policies yield a similar result? In an original dataset observed over eight years and across all fifty states, we find that the exceptionally Southern tendency to resist federal authority extends even to the contemporary bureaucratic regulation of public utilities.

Over the past two centuries, there has been no shortage of state resistance to federal policy in the US South. After the end of Reconstruction, examples of Southern stubbornness have tended to come in the form of state-level intransigence regarding the extension of civil rights to nonwhites or the integration of public facilities and services. While such defiance was witnessed perhaps most prominently in the broad and dramatic Southern efforts to circumvent or delay the desegregation of public schools in the aftermath of 1954’s Brown v. Board of Education, Southern resistance to federal policy has also extended to other policy areas such as the expansion of voting rights, equalizing access to public accommodations, the expansion of Medicaid after the passage of the Affordable Care Act, and determining the scope of federal authority over rail infrastructure in the pre-Civil War period. This existing research, however, has focused on Southern state resistance to well-known policies issued by either Congress or the federal judiciary. 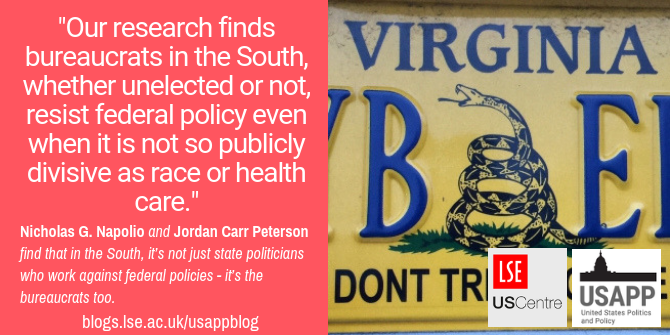 “Liberty License Plate” by Alves Family is licensed under CC BY NC 2.0

By contrast, we decided to examine utility policy to consider the possibility of Southern resistance in a less well-known policy area in which there is no immediate basis to assume that there would be tensions between the state and federal governments. Likewise, we expand the consideration of Southern opposition by looking at state agency resistance to orders and directives from their counterparts in the federal bureaucracy.

Southern state agency responses to actions from the Federal Energy Regulatory Commission (FERC) suggest there is a dimension to administrative resistance at the state level based on the parochial preferences of state administrators. While most existing research examining demonstrations of state opposition to federal policy focuses on lack of cooperation in state legislatures and governors, we consider the relationship between state and federal bureaucrats by investigating the conditions under which state agencies resist policies put forward by their federal counterparts. 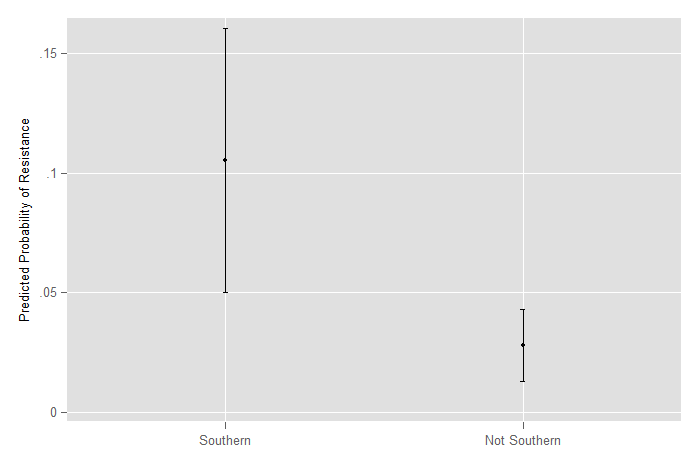 These estimates adjust for various political, demographic, and administrative factors that may impact state bureaucratic resistance, including the underlying partisanship of the state, whether the state agency has elected leaders, the partisan composition of the state legislature, the percentage of commissioners on the state agency that are Republican, the partisan composition of the FERC, and the percentage of the population that lives in rural areas. These results suggest that a state agency’s decision to resist federal administrative policy through litigation is not driven by general anti-centralization ideology, legislative or public pressure on the agency to resist, or the underlying economy of the state. Rather, it is driven by local loyalties and self-interest.

Southern resistance to federal policy is typically construed as an act of defiance by elected politicians related to controversial social and cultural issues. We expect Southern firebrands to admonish federal overreach, whether it be Governor Wallace obstructing integration in the 1960s, or Kim Davis, a county clerk in Kentucky, resisting the Supreme Court ruling striking down same-sex marriage bans in 2015. Our research, however, finds bureaucrats in the South, whether unelected or not, resist federal policy even when it is not so publicly divisive as race or health care.