Like it or not, lobbying has become a major part of the American political process. And while laws have been passed by both the federal and state governments to regulate lobbyists’ activities, James Strickland finds that in some cases, they may actually hurt transparency. He writes that US states with more regulations on lobbyists see lower registration rates than would otherwise be expected as lobbyists avoid regulation by not registering. Broader criteria as to what constitutes lobbying, he argues, along with lower thresholds, would improve compliance and transparency.

Lobbyists try to influence government policy by meeting with lawmakers, testifying before hearings, or engaging in other political activities. Their influence on policymakers raises concerns over democratic accountability. Successful lobbyists might play a part in diverting policies away from the preferences of voters. In response to these concerns and political scandals involving lobbyists, officials in the US have enacted a variety of laws that attempt to disclose and regulate the activities of lobbyists. Some lobby laws, however, hurt transparency.

Policymakers face a trade-off between disclosing more lobby activities and regulating them. Disclosing lobby activities can involve requiring lobbyists to register and indicate which interests they represent. Some US states even require lobbyists to report whom they meet with and the topics of their conversations. Ideally, these activities are disclosed and monitored by concerned members of the public, including the press, good-government organizations, and opposing lobbyists. Disclosure allows the public to determine ethical standards in government.

Policymakers might also regulate lobbying activities directly. Regulations limit or ban particular activities. Some US states prevent lobbyists from making campaign contributions during legislative sessions. Other examples of regulation include limits on the value of meals or gifts bought for lawmakers, limits on conflicts of interest and honoraria for speeches, and laws that prevent former lawmakers from lobbying immediately after quitting. Such regulations delineate ethical standards directly.

While many governments try both to disclose and regulate lobbying, the trade-off between transparency and regulation occurs when regulations apply only to registered lobbyists. When the activities of registered persons are limited, some lobbyists fail to register. They might instead prefer to give campaign donations freely. In the US, unregistered lobbyists are not required to report their activities to the government and public. Such lobbyists are known as “shadow” agents. When lobbyists fail to register, transparency suffers because the public is not informed about the identities and interests of unregistered agents.

Of course, lobbyists may instead adapt or limit their activities to avoid triggering registration requirements. US states differ on who is required to register. In some, those who expend more than particular thresholds must register. In others, registration is a matter of how much time one spent lobbying. Still other states employ a combination of criteria, which might also include compensation thresholds. While it is not known exactly how unregistered lobbyists change their behavior to avoid registering (if at all), former members of Congress have been found to accept consulting positions that pay well but do not involve lobbying or registration. 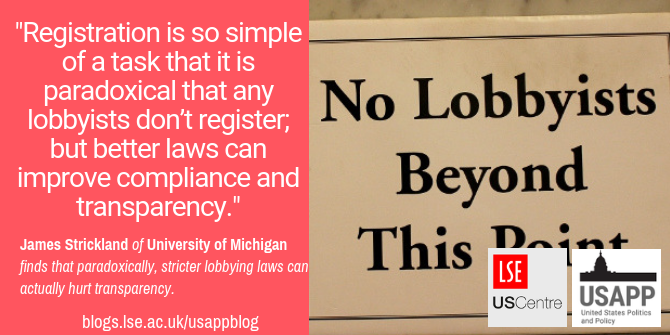 “Maryland State House – Lobbying” by Daniel Huizinga is licensed under CC BY 2.0.

We can measure the transparency-regulation trade-off directly. Having more registration criteria results in more interest groups registering. With more criteria, the activities of more lobbyists qualify for registration. When one compares nations or states with similar numbers of criteria, however, a more nuanced pattern emerges. In our research, we found that US states with more regulations on lobbyist conduct, more criteria did not lead to more registered interest groups. Such regulations included limits on campaign contributions and gifts. Requirements that registered lobbyists report meeting details or spending amounts did not depress registration rates.

The transparency-regulation trade-off can be quite sizable. My statistical analysis indicated that, adjusting for state size and other features, there might be hundreds of unregistered (shadow) interest groups in some US states. If one adds all the registered interests in the states from 2013, it comes to about 58,000. If one adds all the potential interest groups who would have registered (given no regulations), there would have been more than 72,000 registered groups: a nearly 25-percent difference. In other words, nearly one in every five groups lobbying in the US states may have no registered lobbyists. Figure 1 below shows this transparency deficit across all the states and over time.

Figure 1 – Transparency deficit across all 50 states 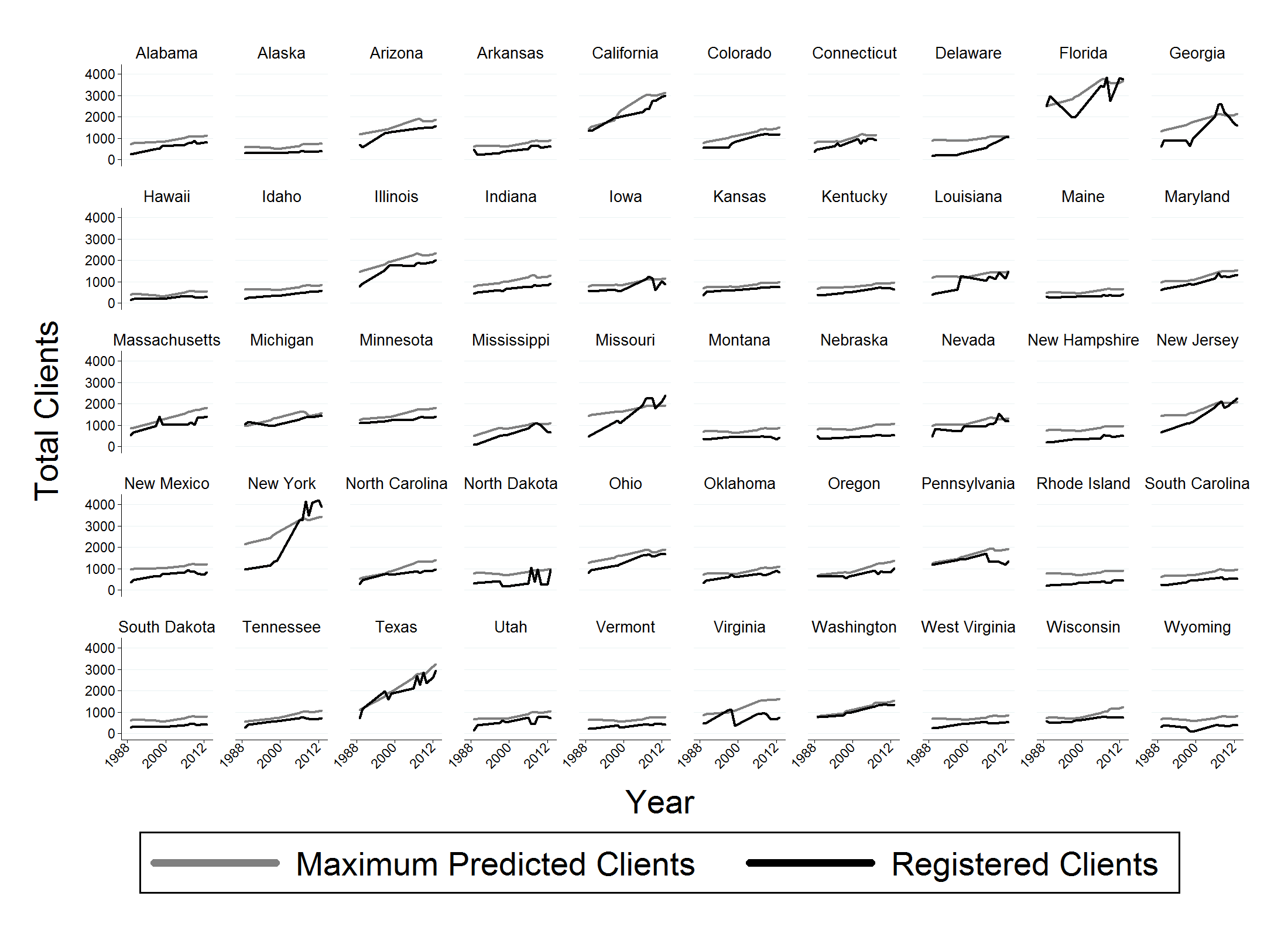 There is other evidence for a transparency-regulation trade-off. The total number of registered lobbyists active in Congress began a long decline after the enactment of the Honest Leadership and Open Government Act of 2007. The act increased reporting requirements and placed new restrictions on former members and staff persons seeking to lobby. In addition, the Obama Administration banned registered lobbyists from serving on federal advisory committees in 2009. As a result, some lobbyists promptly cancelled their registrations. Research suggests that more and more lobbyists are not registering in Washington DC; and that only about half of all lobbyists active in Beltway politics register.

Registration is so simple of a task that it is paradoxical that any lobbyists don’t register; but better laws can improve compliance and transparency. Nations and states should adopt broad criteria that cover multiple facets of lobbying: including expense, compensation, and time thresholds. Moreover, those thresholds should be reasonably low so that paid, even part-time lobbyists have no room to hide. Other regulations, such as limits on campaign donations or gifts, should apply to everyone (registered or not). This would help diminish the incentive for lobbyists not to register. These recommendations are intended to improve transparency by increasing lobbyist registration rates. Others have made similar recommendations here and here.

With the adoption of better lobby laws, whether in the US or elsewhere, members of the public will be made better-informed of who all is trying to influence policymakers. This has the potential to improve how well policies reflect the desires of voters given that members of the public actually care about lobbyists and political influence. (I believe they do care.) Policymakers in the US and elsewhere can learn from inefficiencies in existing laws and work to improve transparency.